The Quest for Energy Storage

There's no stopping it now: the lithium revolution is fully underway.

The commodity is one of the few connected to the energy markets that hasn't been knocked down by the past year's rout and is actually in a strong uptrend thanks to increasing demand.

Truth is, it's actually benefited from a beaten-down oil market, with new opportunities for renewable energy taking the spotlight... and with that came the need for better energy storage.

And make no mistake, lithium is not only the current king of storage technology, but you can bet it's going to stay that way for the foreseeable future.

Just a few years ago, lithium prices stood around $5,000 per tonne. Today, they can be as high as $15,000, and they're still rising as the supply-demand gap shrinks.

But keep in mind, lithium isn't the only commodity this revolution is boosting through the roof...

Lithium, though it takes the titular role, isn't the only thing that makes up today's batteries. In fact, it's not even what makes up most of the battery.

Granted, that's quite a bit of lithium considering the number of phones, tablets, laptops, home computers, and car batteries out there today.

And yet that's nothing compared to graphite.

Although most people only know graphite as the “lead” in your everyday pencil, it also happens to be a major component of lithium batteries and is one of the most common materials used for the anode.

In fact, the average lithium battery contains about 1 kilogram/kWh.

That's 525% more graphite per kWh than lithium. Keep in mind that this is just in anodes, too; extra graphite can also be utilized as a shield that moves heat away from the battery, preventing crazy things like, you know... explosions.

So as you can probably guess, lithium isn't the only commodity with strong demand growth ahead.

The difference between the two, however, is that graphite hasn't hit a supply-demand barrier yet.

You see, both lithium and graphite are abundant on Earth.

Graphite, however, has a few advantages.

First, you can extract it through hard-rock mining operations, and it is more concentrated in these rocks than lithium. Moreover, we can synthetically produce it!

And it was only recently that natural graphite became the preferred choice for high-grade supply over synthetic.

Until the mining and purification technology improved, synthetically produced graphite had a higher purity. Now, natural production can be as much as 99.99% purity, compared to the 99.0% purity of synthetic.

Graphite is just layers of carbon atoms that are connected in hexagons. Pulled apart, it would look something like this: 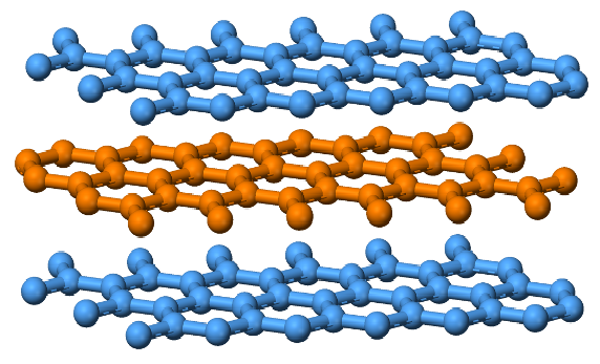 Believe it or not, that atomic structure above is actually more stable than diamonds, and also less rigid, so it can be easily shaped for use in a battery or a pencil.

And yet that's not the only way we're taking advantage of carbon to improve today's battery designs.

A single layer of graphite (the orange layer pictured above) is called graphene, and it has its own set of extremely useful properties. Of course, the fact that it has a massive surface area makes it ideal for conducting electricity.

Now, despite its abundance, the gap between graphite demand and supply is narrowing fast, which is great news for individual investors like us, who have seen the price level out and stay put in recent years.

In fact, market demand within the battery industry is expected increase 118% by 2025. I wouldn't even be surprised if we see those estimates grow, too, considering the momentum building in the electric vehicle market.

After all, electric vehicles accounted for the largest share of the hybrid and electric battery market last year, whose value is expected to grow at a CAGR of 20% from now until 2022.