Let's be brutally honest right now — lithium batteries do not “tend” to explode any more than the devices they power “tend” to go blue screen of death on you.

Things go wrong with the hardware or the software, and suddenly the technology as a whole should be scrapped?

More important, however, is that it shouldn't stop you from investing in a great commodity.

If nothing else, you should be seeing this fear selling for what it is: a buying opportunity.

Much like car fires and kitchen accidents haven't made us stop using fossil fuels, Samsung's recent rash of phone explosions won't stop us from investing in lithium anytime soon.

But there's a caveat I feel I should make you aware of, dear reader... and it’s time to face the facts looming over lithium.

Lithium has been one of the best-performing commodities on the market in recent years, and it's no wonder why.

Demand has taken off all over the world due to its use in lithium batteries. Utility-scale systems are being installed in several countries, and an increase in EV production has put the threat of supply shortage on everyone's radar. 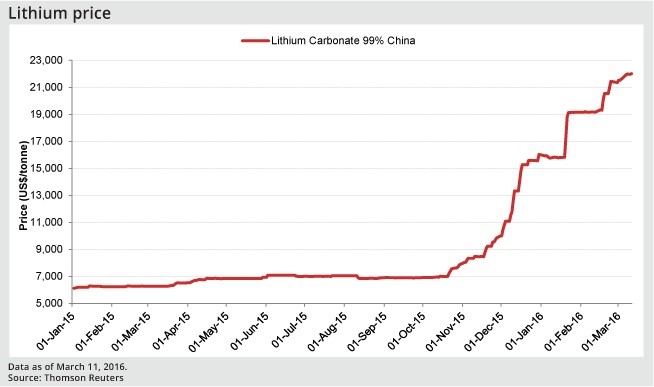 You can probably guess what happened next, too!

Lithium prices surged, hitting new highs. Just a few months ago, lithium carbonate was trading in China for more than $21,000 per tonne! That's more than four times what it cost a year prior.

Now, it's been a dream for early investors who got in on a commodity with a run this big and a bull market this long.

But the inevitable truth is that it won’t keep surging forever. Despite the fact that lithium has had a hell of a run, the supply/demand dynamics will balance out one day.

It’s simply the natural cycle, with all of the ups and downs that come with the tenuous balance between producers and consumers. The lithium market right now is anything but balanced.

First of all, the scale of lithium battery demand is higher than it's ever been before.

What's more, it's not based on an increase in regular consumption — though the demand for lithium in metals and ceramics has also gone up — but on the emergence of a brand new market.

EV Madness Grips Us All

Just a few years ago, electric vehicles were a niche, only for rich people who could afford the giant battery-powered cars and the fancy chargers to go with them.

But now? I'll bet you can tick off a list of car companies making EVs right now without a thought.

Trust me, it’s not difficult considering the list includes nearly every major carmaker in the world, as well as a few startups on the sidelines.

And then, of course, we have Tesla, which sparked this lithium revolution in the first place!

And even though this revolution will eventually die down, that doesn’t mean we don’t have a few decades of growth ahead of us.

Nor does it mean that demand will slip — even if prices correct (not likely).

What it does mean, however, is that we’re not going to see another major run like we’re seeing right now.

And that's a critically important point for today's investors to understand.

The Future of Lithium

Right now, there are a multitude of new entrants into the lithium market, each one looking for that mammoth lithium discovery.

But here's the truth of it: only a small handful of them will actually be profitable for individual investors like us!

You can also bet that those few select lithium winners will be lost in a sea of lithium players that the investment herd will erringly gobble up.

Make no mistake; the supply squeeze has enough legs to run for a long, long time.

And the bottom line for us is that this lithium rally isn’t over yet... not by a long shot.