Tell me the greatest heavyweight showdown in history.

For my younger readers, perhaps it was the slugfest between Wilder and Fury a few years ago.

I imagine if they asked their pop the same question, they’d get a lecture about Mike Tyson’s glory days or even the time Holyfield shocked the boxing world with a TKO over Tyson in the 11th round back in 1996.

You might even get an earful watching the rematch a year later.

But for most, nothing will ever eclipse the Thrilla in Manila back in 1975, when Frazier’s coach stopped the fight in the 14th. If you’re like me, you grew up hearing about these legendary bouts and wish you could have witnessed them yourself.

But if you’re getting a little FOMO from missing these historical heavyweight brawls, don’t feel too bad.

Why? Because you’re about to get a front-row seat to one of the best heavyweight matchups in history...

And the stakes for this contest count in the trillions.

If you had any doubts that global oil demand was going to explode in a post-COVID society, those uncertainties have disappeared into thin air.

So just how bad will things get?

After that, global demand will then climb over 112 million barrels per day by 2040.

I want you to stop for a moment, close your eyes, and think about what it would take for the world to meet that exorbitant demand growth.

More importantly, think of how much it would cost to ramp up global supply to those levels.

Looking at the supply-and-demand balance from the EIA's latest Short-Term Energy Outlook, things are tight enough as it is: 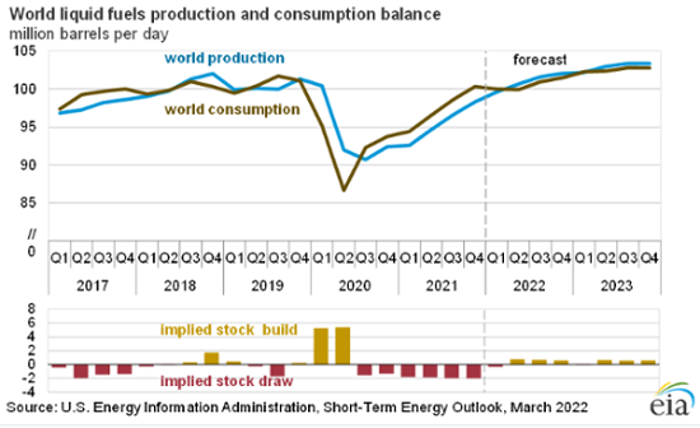 OPEC has said it would take a mind-numbing $11 trillion over the next 20 years to meet that growing thirst for crude oil!

Of course, right now we have to try to take Russian oil off the table. With a crippling round of sanctions placed on Russian oil exports, Putin has been forced to find buyers at an extreme discount — a harder feat than you might think, especially if China ends up turning its back on you.

Now, it’s no secret that most of the world’s new oil supply will come from the tight oil plays in the lower 48 states.

And make no mistake, dear reader: Those oil drillers in the Permian Basin are going to stay on top for a long, long while.

However, there’s only so much more oil they can extract per day from these major producing areas.

The world is going to have to find crude oil somewhere else, and a lot of it.

Thing is, there are really just two places to turn right now...

And only one of them is going to come out on top.

Over the last couple weeks, the Biden administration has been courting Venezuela’s oil industry. Perhaps the recent move by President Nicolás Maduro to consider privatizing his country’s oil fields has loosened up the tension that has lasted for nearly two decades between Big Oil and Venezuela.

I have a feeling major oil companies like Exxon aren’t likely to ever forget the May Day takeover. I know my veteran readers will remember when Hugo Chavez executed this strategy as the “last step” in taking national control of Venezuela's domestic resources.

However, memories have apparently grown short now that all eyes are on Russia.

Personally, I’m not buying it.

You see, Venezuela may hold the world’s largest oil reserves (around 300 billion barrels), but the problem is that its crude oil is far from the light, sweet Texas tea being extracted in the Permian Basin.

And that’s ignoring the painful fact that Venezuela’s oil industry has collapsed into disarray from years of mismanagement.

Fortunately, there’s another massive supply of oil that will come to the world’s rescue.

A few weeks back, I told you that my No. 1 oil stock for $100/bbl oil was Cenovus Energy, a Canadian oil company operating in the bituminous sands in northern Alberta.

Like Venezuela, the biggest obstacle for Canada’s oil industry is the higher cost to extract the resource. However, the tables become flipped during a high price environment like we’re currently experiencing.

Of course, I should also note that the U.S. is already guzzling down Canadian crude at a record pace. We import more than 4.7 million barrels from our friendly neighbors to the north on a daily basis.

For the record, that’s more than four times the amount of oil that we buy from all OPEC members combined!

That’s who the world will turn to for more crude.

And the best part is that individual investors like us are still able to pick up these premier Canadian oil stocks at a discount. Major players like Cenovus Energy are still trading at around 7x their forward earnings.

With the world desperately trying to replace its exposure to Russian crude, Canada has pledged an extra 200,000 barrels per day to global supply.

This is a rare moment when both the fundamental and geopolitical factors are lining up to deliver a monster payday for us.

There’s no way I’m missing this opportunity, and neither should you.