Is the Market Ready to Crash?

There is something about the way humans are hard-wired — our brains seek to find patterns where none exist.

And for some reason, our brains need order and predictability.

Now, scientists say patterns please us. They reassure us that life is orderly, even though most of the time it isn’t... we hate chaos!

One area where chaos exists — especially on a short-term basis — is the stock market. 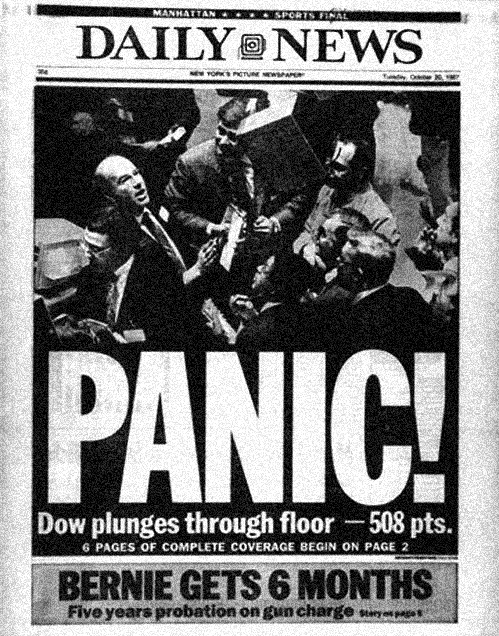 I have no doubt that you’ve heard of “Black Monday” before today... it was a day I’ll never forget.

Thing is, we knew the risk was high, but we didn’t know the magnitude!

Then on Friday, the last trading day before the crash, the stock market fell sharply — more than 4% on record volume.

Yet something just didn’t sit right, even though we were safely in cash.

On Monday morning, October 19, 1987, at 8:00 a.m., I was driving to my office in New York City. Financial news was still in its infancy back then, so basic updates were only given twice an hour.

By the time the NYSE was open, all global markets were plunging, and the DJIA along with them. The tape was running late and couldn’t keep up with the order flow, so by the time the last trade was printed, the stock was already down even further.

It was pure panic... and it hit Wall Street hard.

For the next few weeks, newspapers ran the price chart of the Dow in October 1987 and overlaid the price charts from the great stock market crash in 1929.

Every day, every wiggle and jiggle on the chart was similar to the 1929 chart — with media pundits calling for another Great Depression.

Look, I want you to forget the fact that the market was completely different in 1929 than it was in 1987 — people wanted to see patterns where none existed!

In fact, newspapers continued to make that comparison, even as the current chart stopped falling and stabilized.

Soon, the comparison to 1929 was dropped, and the primary reason for the sharp decline of the October 1987 crash had little to do with the economy and more to do with a form of “portfolio insurance” that institutional investors used to hedge their portfolios.

Just the other day, an analyst at Citibank overlaid the current chart of the S&P 500 with the chart of the index in 1987... and guess what?

It looked like a perfect copy because history was repeating itself again! 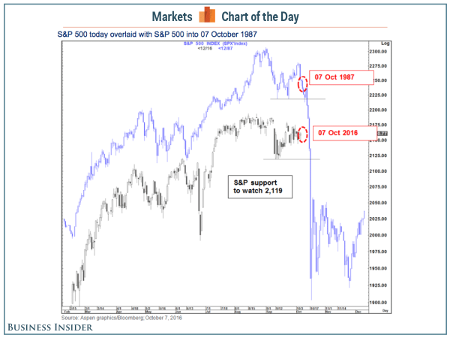 Of course, all sorts of reasons were given for why one should be concerned about the stock market now: concern regarding European banks, a polarizing U.S. election, central banks removing some of the economic stimulus, and recent volatility in gold and oil prices.

But just because the pattern looks similar doesn’t mean the stock market is going to crash.

Remember, humans have a need to find patterns in a world of chaos — this is just one of those times.

Instead of wasting time looking for patterns, intelligent investors continue to sift through the stock market and find stocks that are trading for pennies on the dollar.