Is Plains All American the Perfect Trump Oil Investment?

I’m not going to say that OPEC’s next decision won’t be a big one.

In fact, it could decide the fate of oil, depending on which way the vote swings.

Make no mistake, oil will balance out no matter what. The markets have proven this time and time again.

If the cartel decides to extend the cut, that clearly will help move the market toward balance.

In the meantime, however, all this drama is taking attention away from an even more pressing issue right here at home.

We’re pumping too much oil... much to the annoyance of Saudi Arabia.

After all, the more crude we extract from U.S. oil fields, the more barrels will be available for export.

And yet, there’s just a single, massive obstacle for drillers in the most prolific oil-producing region in the United States: West Texas.

You see, dear reader, they’re desperately running short on pipeline capacity... and they’re not the only ones.

The only problem with having the ability to significantly boost production is that now they have to figure out the most efficient way to get it to market.

Up until recently, the only destination for U.S. crude oil was to domestic clients. If you wanted to tap into the global crude markets, you were out of luck.

Now that Congress has lifted the oil export ban, companies are flipping the tables: 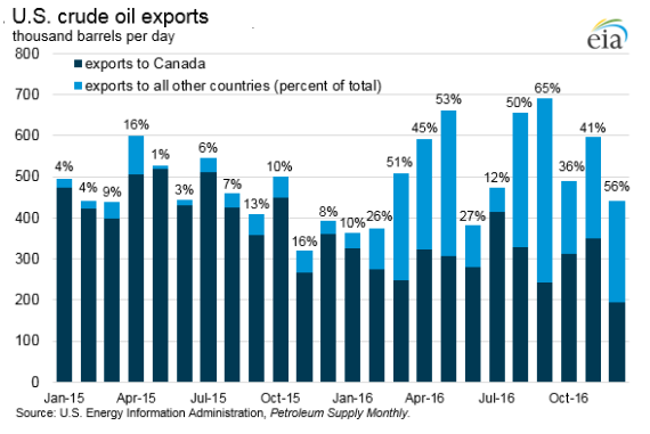 While this may be a fantastic development for the U.S. oil industry (and investors like us who have a little skin in the sector), the truth is we’re not equipped to handle the real tight oil boom.

And nowhere else is our ongoing infrastructure crisis more critical than in the Permian Basin. The well-known Texas shale play has been the most resilient area for crude oil production, even throughout the last down cycle.

However, this isn’t the first time we’ve come across this problem.

Back in 2012, when the shale boom was still ramping up, pipeline capacity in the Bakken shale was reached fairly early on, which meant companies had to pay a premium to ship their product by rail or truck.

This, of course, created bottlenecks that put on even more pressure for new pipelines.

Now, when this happens, it’s far from the final death knell for oil.

Look, it’s really not a secret that President Donald Trump is a fan of fossil fuels. And although he’s overly optimistic about coal, he knows the bridge away from coal starts with America’s huge tight and shale gas resources.

More importantly, he knows that oil and natural gas infrastructure is in trouble.

He already got a head start after approving the Keystone XL and Dakota Access pipelines just days after taking office.

But that’s just the beginning...

President Trump has already begun slashing his way through regulations after putting Scott Pruitt in charge of the EPA, and he is now making plans to subsidize domestic oil use over foreign imports.

He is also setting aside money in his newly minted budget for U.S. infrastructure improvements, some of which will be injected directly into American-made pipelines, and not a moment too soon.

With the renewed growth in output, it’s been estimated that the United States will need as much as $272 billion worth of new pipeline capacity to come online within the next 20 years.

After all, hundreds of new wells in the Bakken, Permian, and beyond won’t be worth the dirt they’re drilling into unless we can efficiently transport the crude they extract.

And pipeline players are already seeing the benefits...

Plains All American (NYSE: PAA) is one of the largest midstream infrastructure companies in the country, and it’s been having a pretty stellar year:

In addition to benefiting from the approval of both the Keystone and the Dakota Access, Plains recently acquired indirect ownership of the Alpha Crude Connector, a newly constructed pipeline that services the Delaware Basin in Texas.

The company already has plans to further connect the line to its existing network, in addition to expanding its capacity to nearly 350,000 barrels per day.

Plains isn’t the only player in the field, however.

In fact, there are a few undervalued investment gems out there that are still eluding Wall Street.

Whether that’s due to the fact that the big firms are usually slow to catch on, or that they just don’t care — it doesn’t matter!

The trick is to stay a step ahead of them, and nowadays that’s easier than you might think.