Is Lithium the Future of Technology?

Lithium-ion batteries are a technological marvel, and have made many things possible that many would have never dreamed of.

Whether it's small things like phones, or larger products like cars, lithium has allowed much advancement in the way we develop technology.

However, lithium was not always the wonderful, game-changing metal we know today.

Exxon was actually the first manufacturer of lithium batteries. The need came about during the oil crisis in the 1970's. The thing is, they were not rechargeable, and the way they were made created toxic by-products in the electrolyte.

These batteries were used in the first digital watches, for example. The only problem was that gases from the electrolyte could build up in the battery and catch on fire if they made contact with the air.

Make a note.... this does not happen with current lithium processing.

Starting with those issues, and future issues with battery fires, consumers thought they would never see something as “unstable” as lithium in the world markets.

The reason they became popular again was because people were starting to understand that fossil fuels needed to be replaces with alternatives, and fast. This prompted scientists and engineers to make lithium a safe metal. 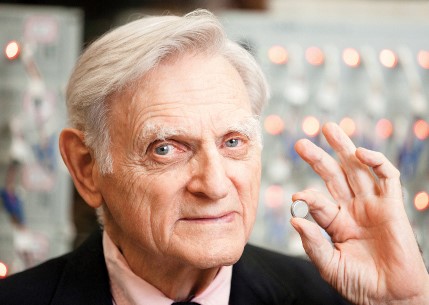 A scientist by the name of John Goodenough is widely considered to be the father of modern lithium-ion batteries.

The reason that those are safe is that, because unlike the older stuff, these technologies have no “free” lithium.

A chemical is used to bind the lithium ions to metal oxide crystals in the positive cathodes, so the lithium ions never come into contact with other elements... thus, no unwanted or inconvenient fires.

There are many advancements on the horizon, although many scientists claim that it will take a long time (and a lot of work) to make lithium batteries perfect for better technology.

In fact, some of these advancements won't be ready for five years or more, with some potential ideas simply not viable for commercialized consumption at all — and never will be.

The end goal here is better energy from sources other than fossil fuels, or even the end of fossil fuel culture altogether. Because the world needs to think of better ways to acquire energy... and lithium looks like it has the potential to be the ultimate answer.

Is an Energy Revolution Looming for China?
Energy and Capital editor Keith Kohl explains the plethora of problems facing China, whether they give up on coal or not.
Tesla (NASDAQ: TSLA) Teams Up with LG Chem (KSE: 051910)
Energy and Capital editor Keith Kohl looks into the newest deal in lithium batteries and how it's going to change the balance of power on the market.
Big Crash in Hoverboards
Christian DeHaemer talks about the surging demand for lithium and where it comes from.
Tesla (NASDAQ: TSLA) Cutting Lithium Battery Costs in Half
Energy and Capital editor Keith Kohl explains the recent analyst estimates that show how Tesla will be reducing the cost of lithium battery packs dramatically in coming years.
Hydrogen Fuel Cells: The Downfall of Tesla?
Lithium has been the front-runner in the battery technology market for years, but that is all coming to an end. Elon Musk is against them, but Jeff Bezos is investing heavily in them. Hydrogen Fuel Cells will turn the battery market upside down and we've discovered the tiny company that is going to make it happen.