Is it Time to Trade in Your Gold?

If you’ve ever looked into investing in precious metals, then you’ve probably heard of the gold-to-silver ratio. And if you haven’t, you’re about to.

This simple-to-use formula should be one of the most important weapons in your precious metals investing arsenal.

I’m going to start by explaining exactly what it is and how to calculate it yourself and then let you know why it’s so important for anyone investing in these two metals.

What is the Gold-to-Silver Ratio?

You see, while both gold and silver tend to follow the same pricing trends — when one goes up or down, the other does too — they don’t move at the same speed.

Gold usually starts the trend, and silver brings up the rear. Think of it as a dance. Gold leads and silver follows.

But that’s not the only difference.

Since silver's more of a speculation trade, and an industrial metal too, its price movements are way more volatile. If gold moves a little, silver moves a lot.

So that means the relative prices of the two — how much gold you can buy with a particular amount of silver and vice versa — are constantly changing.

And that’s where the real genius of this ratio comes in to play. More on that later. First, let’s learn how to calculate the ratio.

Some Simple Math for Exponential Growth

There are tons of websites you can go to in order to find the current ratio, but it’s just as easy to calculate it on your own.

Almost too easy, right? Well, it leads to a strategy that’s just as simple.

Why Does the Ratio Matter?

Over specific periods of time, the ratio moves within a particular range.

But now, since the prices of both metals are set by the demand in the market, that ratio fluctuates constantly. And for the past two decades, it’s kept pretty steadily within a range of around 45 to 80. The median has been about 55.

Two Decades of the Gold-to-Silver Ratio 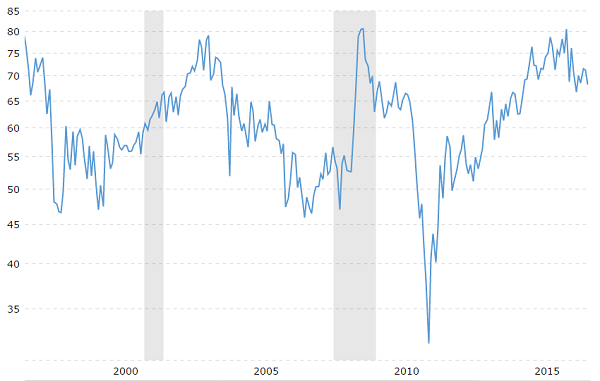 So why is all that important?

Well, knowing the ratio and the range in which it fluctuates, you can trade your metals and grow your stockpile of them without ever investing an extra penny!

"How’s that?" you ask. Well, let me tell you. When you hear how simple it is, you’ll be wishing you knew about this years ago.

Say you start with one ounce of gold.

In four trades, you’ve tripled your gold holdings without spending any additional money.

And the best part is that you haven’t really taken on any additional risk because whether you’re holding gold or silver, you’re still invested in precious metals!

You’ve increased your gold holdings by over five times or your silver by 463%.

And if you sell that silver the next time the ratio hits 45, you’ll be able to buy almost 10 ounces of gold. You just increased your gold by about 900% in only eight trades without spending a single dime!

I know what you’re thinking: that’s just too easy to work. But it does, time and time again.

In fact, it’s the perfect strategy for conservative, long-term precious metals investors. You’re not jumping in and out of markets trying to time tops and bottoms. If the ratio calls for buying silver, that’s what you’re doing. And if you’re selling silver, then you’re buying gold at the same time.

You’re never out of the precious metals market, and you still have constant protection against inflation and financial collapses.

One thing to keep in mind, though, is that this strategy isn’t about individual prices. It’s about the relationship between the two prices. So it’s not something where you’re looking at percentage gains.

It’s a way to increase the amount of physical metals you own without investing any extra money. You're looking at growth in quantity, not in value. Of course, the value of your investment rises, too, as long as prices for the metals increase. If you'd started with one ounce of gold worth $580 back in 1996, you'd now have about 450 ounces of sliver worth $18 each, or $8,100.

So while you grew your physical holdings, you also saw the value of your investment increase by a whopping 1,297%.

Either way, you’ll be increasing the amount of the metal you own.

The individual prices don’t matter. It’s the relationship between them that does with this strategy.

So, now that you’ve got an understanding of how this works, let's talk about where the ratio sits today and, more importantly, how you can maximize your investments in precious metals.

A Return to Normalcy

The highs and lows in the ratio never last. It always reverts back to more normal, historical averages. Now, this doesn’t happen overnight. Typically, it doesn’t even happen in a few months. It usually takes years. But it always happens.

It moves from astronomical levels of 80 or above back to more reasonable ones around 55. And sometimes it swings all the way through those historical norms to the other extreme. Then the ratio hits in the 20–30 range, and your silver can be exchanged for much more gold.

Last March, the gold-to-silver ratio hit a five-year high of a little above 80. That meant you could sell one ounce of gold and buy 80 ounces of silver with the proceeds. Now it’s back around 70, a more reasonable level, but still high compared to historical averages.

That means silver, in comparison to gold, is undervalued. So now might be a good time to sell some of your gold and move the proceeds into silver.

Invest in Silver and Profit from Gold’s Gains

For the cash you’d get for one ounce of gold, you’d be able to buy about 70 ounces of silver. Then, as the ratio returns to the average (or crosses through it and heads even lower), you can sell that silver and get back into gold. But you’ll get far more than the one ounce you traded for your silver.

I’m of the mindset that we’re going to see higher gold prices in the future, though. So that means for a normalized ratio, we’ll have much, much higher silver prices. If gold prices increase 100%, then silver is going to move up nearly 200% or more in relation to its counterpart.

That’ll bring the ratio back to a reasonable level. And it’ll make the gold you sold now way cheaper to buy back after you sell that astronomically priced silver.

Now, don’t get me wrong; I’m not suggesting you sell out of all your gold. I wouldn’t ever do that. It’s got a place in every portfolio. But now would be a good time to sell a handful of it and get more silver in your vault.

In a few years, when the yellow metal is more undervalued than the silver you’ve got, you’ll have the opportunity to get your gold back... plus a lot more.

Pull a Silver Rabbit Out of Your Hat

I mean, look at that 20-year chart again. The ratio hit above 80 during the financial collapse. People flocked to gold as a safe-haven investment. But it came back down to around 55 within a year. And it kept falling. Heck, it hit around 30 just a few years after peaking above 80.

And people who used the ratio to allocate their investments rejoiced.

All without putting another penny into the market.

Just think if they’d sold that gold again and bought silver last March. They’d be sitting on 213 and a third ounces of silver. They turned 80 into 213.3 without adding anything new. It’s like magic. 133.3 ounces of silver just appeared out of thin air — like a rabbit out of a hat.

But these folks aren’t magicians. And they’re not alchemists, either. They’re just smart investors who know the value of this simple yet cunning strategy.

History Doesn’t Repeat Itself, but It Does Rhyme

When the ratio drops again, they’ll trade back into gold and have far more than the one ounce they started with less than a decade ago. Even if they trade back in at the median of 55, they’ll sell their silver for 3.88 ounces of gold — over an ounce more than when they bought back in at 30.

And if they wait until it hits a level like 30 again — which, according to history, could happen — they’ll have more than seven times the amount of gold they started with during the recession!

When the market moves into one or the other of these metals, demand outstrips supply. So, the only way you can get the gold or silver you want is by acting before everyone else. Buy gold when everyone wants silver. And buy silver when everyone’s flocking to gold.

It’s value investing with precious metals. Just head towards the undervalued one. If you stick to this ratio and strategy, you’ll always come out ahead.

To investing with integrity (and foresight),