The Choke Point Worth $200 a Barrel

At least Iran's latest motto regarding oil prices is  straightforward.

Now that the cost for a barrel of Brent crude is around $113 per barrel, it turns out $150 is the lowest acceptable price, according to an Iranian oil minister.

Can we really blame them for demanding exorbitantly high prices for crude?

Iran's domestic production is at 20-year lows, and sanctions have lowered July exports by an estimated 45%.

With oil trading relatively flat since mid-August, perhaps we should have expected more saber rattling from them.

The Choke Point Worth $200 a Barrel

What will it take for oil to spike as high as $200? The answer lies with a tiny strip of waterway just 21 miles wide at its narrowest point.

Every day, roughly one-third of the world's seaborne oil shipments pass through the Strait of Hormuz — not to mention the more than two million barrels of LNG also traveling through the passage.

And while we've heard these threats time and again over the last few years (really, decades), attempts to stir the pot and drive crude prices higher have really started to spook some of the world's largest producers.

Both Saudi Arabia and the UAE are bypassing the Strait as much as possible... to the point of opening up new pipelines to offer the countries more flexibility in getting their barrels to market. China won't be taking Iran's threat lightly, either; half of their daily oil imports travel through the Strait of Hormuz.

Should the U.S. be worried?

After all, with our own domestic production booming and the reliability of the three million barrels of Canadian oil flowing daily into the lower 48 states, is the fate of the Strait a real concern?

Well that depends on the answer to this question: Are we out of the woods when it comes to depending on Middle East for oil?

Before you answer that question, take a closer look at our imports.

If we are truly freeing ourselves from the shackles of Middle East oil, we're doing a very poor job of it.

In fact, we're doing the exact opposite.

Our imports from Iraq, Saudi Arabia, and Kuwait are actually heading higher:

What's in store for oil in this next chapter of the price story? Will we finally see it spike above $200?

Truthfully, we won't be seeing those price levels without a full-blown conflict erupting on Iranian soil.

At a certain point, demand destruction steps in.

The fact that our reliance on Middle East oil is increasing means we aren't as insulated from foreign oil as our election-seeking candidates would have us believe... but we also can't overlook the success in domestic production.

Here in the United States, where WTI is trading at a near-$17 discount to Brent crude, domestic production is at a 14-year high (which will inevitably rise as oil companies continue developing our unconventional resources).

And when it comes to investing in our domestic boom, the best opportunities aren't from the big names you see plastered across media banners.

I'm referring to the major international oil companies like ExxonMobil, BP, and Chevron, to name a few, that dominate headlines. Even though Exxon trades with a $423 billion market cap, its performance hardly excites potential buyers.

For starters, they're almost always late to the party. Had you bought shares of ExxonMobil in the beginning of 2008, you'd be sitting on nothing right now...

Compare that with just one of the leading North Dakota producers — Continental Resources — trading with a market cap slightly below $15 billion: 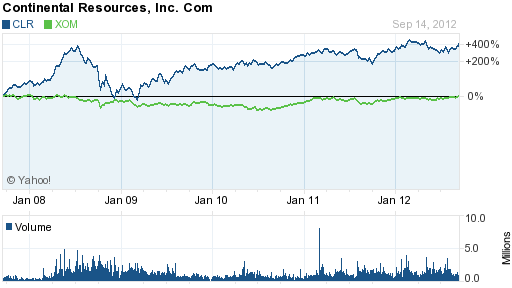 As Big Oil is being squeezed out of the world's largest oil fields by the domineering NOCs, they're left with one course of action...

They have to spend their way out.

Over the next few years, the oil majors will be paying top dollar to scoop up smaller companies drilling in all the right places — making these three oil stocks under $10 sorely undervalued and ripe for acquisition.