Investing in the Mining Stocks That Make Electric Cars Possible

I can’t believe it’s been 13 years since I pissed off a bunch of oil investors at a “future of energy” investment conference in 2007.

Those were some good times. :)

I told them that the internal combustion engine was an outdated technology and by 2020 there would be 1 million electric cars on the roads.

The oil investors were not pleased and spent most of the Q&A mocking me, telling me I was too young to fully understand why I was wrong and, of course, why such a claim would only be supported by pesky environmentalists.

One guy in particular actually got in my face and yelled at me, saying I was being irresponsible by suggesting such a thing.

How dare I question the future viability of a 148-year-old technology.

In all fairness, though, I was wrong.

There are about 6 million, and that number is expected to grow rapidly over the next 20 years.

In fact, according to Bloomberg, by 2040, electric vehicles will make up about 60% of global passenger car sales and 81% of municipal bus sales.

I’ve spent most of my career being shit on for making claims that were at odds with those who tend to eschew the sound premise that markets evolve over time.

And just to clarify, this doesn’t mean I’m anti-oil or anti-internal combustion.

And if you’ve followed my advice over the years when it comes to electric cars, you’ve probably made a lot of money.

In fact, at that 2007 investor conference, I actually told those in attendance about a little company called Tesla and noted that if it ever went public, it would be a great long-term play on the transition of personal transportation technologies.

How did that turn out?

Well, see for yourself … 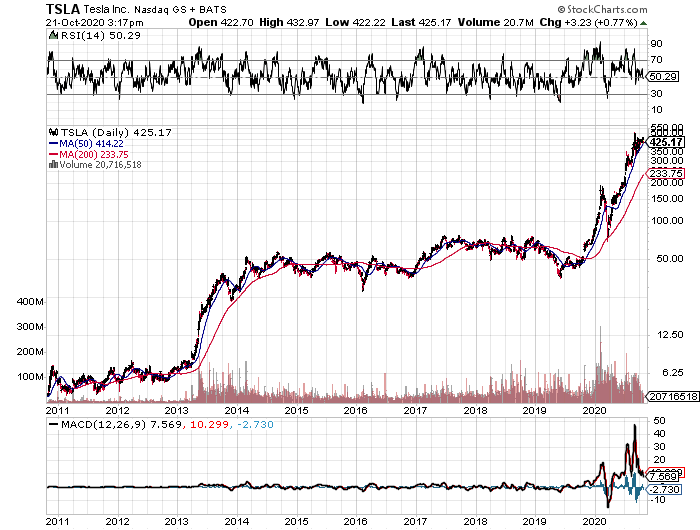 Not a bad score for a company that most analysts said would never last a year.

Of course, just as markets evolve, so do the major players that operate within those markets.

Yes, Tesla (NASDAQ: TSLA) is the obvious electric vehicle play, but it’s not necessarily the most profitable.

Truth is, we’ve come so far over the past 13 years in terms of technological progress in the electric vehicle space that demand is no longer questioned, and now it’s all about how the hell we’re going to be able to keep pace with that demand.

Especially when some of the materials required to manufacture electric vehicle batteries can be extremely hard — and expensive — to source.

Whether its cobalt, cadmium, lithium, or graphite, stockpiles of the materials necessary to keep pace with the demand for electric vehicles are simply not sufficient.

At least not without having to rely on China, which pretty much controls most of the production of these key materials.

And for us, that’s the rub.

You see, regardless of who wins the next election, both Biden and Trump have been and will continue to be very aggressive in terms of supporting more North American production of these materials.

They have to be, as this is really about national and economic security.

Without domestic sources of these materials, China’s got us by the proverbial plums. And no one wants that.

That’s why, over the next few years, you’re going to see the government offering both direct and indirect subsidies to the producers that can provide a hedge against Chinese control of these materials.

Now the truth is I’m not much of an expert when it comes to mining stocks.

But a few years ago when I saw this starting to play out, I reached out to my colleague Keith Kohl to get his take, as he’s made a ton of cash in the mining space.

Turns out he had already been knee-deep in this stuff, cherry-picking dozens of under-the-radar North American mining plays that are being heavily funded by both electric vehicle developers and the government.

The amount of research he had already done just blew me away.

He even gave me a list of 29 different ways to make money from the run on North American miners providing key materials for electric car producers.

Needless to say, Keith’s hard work and due diligence has already paid off for me, and it can pay off for you, too.

And if you don’t believe me, just look at the evidence for yourself in his most recent investor report.

Folks, this is basically just easy money for the taking.

I advise you to take it.