Investing in the Gigafactory of Electric Buses

Take a look at this picture.

Don't focus on the people, though, but rather what's on the white cart in the middle.

What you’re looking at there is an electric vehicle battery, but probably not the kind you’ve seen before.

This battery, unlike the batteries you might find in a Tesla, Ford F-150 Lightning, or Chevy Bolt, contains significantly more power. In fact, the power contained within this particular battery would be too strong for any electric passenger car. Even the most high-end Tesla on the market couldn’t handle this thing.

But there’s a reason for that.

You see, this battery was never designed for electric passenger vehicles.

This battery was designed for electric commercial buses, the fastest-growing sector of the electric vehicle industry.

According to Bloomberg, the electric bus market will exceed the growth rate of electric passenger cars because in almost all charging configurations, electric buses have a lower total cost of ownership than conventional municipal buses.

With this kind of growth, the electric bus market will need something similar to the Tesla gigafactories, which now pump out millions of battery packs that are used in vehicles all across the globe.

In addition, this new electric bus “gigafactory” is also producing drivetrains and other ancillary systems incorporated into medium- and heavy-duty electric vehicles and equipment.

And while electric buses may not be as “sexy” as a Tesla Cybertruck or a 500-mile range Lucid Air (and damn, that’s a nice-looking car)… 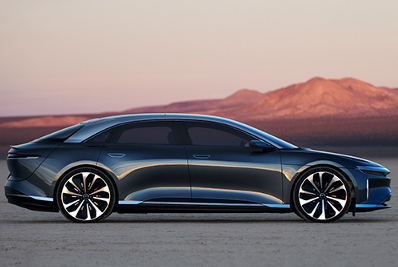 Neither of those companies have the profit potential as the first electric bus company to have an operational gigafactory for electric buses.

With this new electric bus “gigafactory,” the game has officially changed.

Not even the major automakers like GM (NYSE: GM) and Ford (NYSE: F) have such a production facility for electric buses. They haven’t even started yet. But the electric bus company that got the first-mover advantage here is already pumping out these batteries — and doing so right here in the U.S., thereby allowing for all kinds of sweet government lucre.

Look, I don’t make the rules. I just use them to get rich — and you should too.

The bottom line is there's no greater profit opportunity in the electric vehicle space than electric buses — and there’s no greater stock to play than this one.

This is essentially the Tesla of electric buses but without the downside of public relations problems and an overvalued stock price.

In fact, this electric bus stock is actually trading at a slight discount right now. However, that won’t last much longer, which is why I’m sharing this presentation that gives you all the details on the first electric bus company to build the first “gigafactory” for electric buses.

I’m convinced that once you take a look at the numbers, the revenue history of this company, and, of course, the backlog of contracts it has in hand, you’ll be rushing to put your buy order in — while the stock is still cheap.