Investing in the Future of the Lithium Revolution

The Reason You Don't Want to Invest in Lithium Miners

It looks more like something out of a sci-fi movie than anything else, and watching it in action sends an eerie shiver down my spine...

Cosmetic improvements aside, watching the serpentine metal arm for the first time reminded me of the sometimes dramatic — and creepy — lengths to which people will go when they don't want to do something themselves.

But whether or not Elon Musk's automatic charger is even necessary, one thing about the lithium revolution has become glaringly obvious: Where there are new high-tech devices, you can bet there will be lithium batteries to power them.

And that's where we can find an investment opportunity that comes but once a generation...

One day, probably soon, you'll get tired of hearing me mention how many things are powered by lithium batteries.

However, today is not that day.

Unless, of course, we want to push aside everyday items that have become indispensible for many of us: laptops, cell phones, watches, cars, utilities, industrial machines...

I haven't bought a pack of AAA batteries in quite a while — but I did just shell out a pretty penny for a new cell phone charger yesterday.

Yet rechargeable batteries aren't just the future; they're the now. And for early investors that can recognize this increasingly lucrative market, there's no better to place to focus right now than supply.

So you can't help but ask, “Where is all that lithium coming from?” Perhaps an even better question is who will supply Elon Musk and his coming Gigafactory?

I'll bet the real benefactor to Musk's supply problems isn't who you think...

Keep it in the Family

Look, it's well known that Tesla's Gigafactory will be demanding tons of lithium every year when it goes into production, but what most people don't realize is that Musk will be looking domestically for his lithium supply.

That seems to give us an obvious answer, doesn't it? After all, Albemarle (NYSE: ALB) became the country's only domestic lithium producer the moment it acquired Rockwood Holdings earlier this year for $6.2 billion, gaining a foothold in its hard-rock lithium mines in Nevada.

Now, seeing as Albemarle is one of only three major lithium companies worldwide that together provide about 90% of the world's lithium supplies, it sounds like it would be Tesla's top choice for a lithium supplier.

You see, Albemarle extracts mainly from its hard-rock lithium mines. Considering that the United States' lithium reserves are located in Nevada, that would make it the most profitable player in the domestic market.

That is... if there weren't a much better way to get lithium supplies.

Why You DON'T Want to Invest in Lithium Miners

Perhaps the most overlooked part about lithium supply is that it can be extracted from more than just hard-rock mining.

You see, lithium is found not just in rock but also in salt flats, or brine. Most people don't realize that lithium brine extraction is by and large the more economical choice.

Here's the problem: Hard-rock mining can be very expensive. Exploration, development, construction, and actual production costs are extreme — at least compared to brines. If we include the discovery, testing the area for resources, developing the acreage, and actual construction of production equipment, hard-rock mines can cost anywhere upwards of $2 billion.

Moreover, this process could take between seven and 10 years, which doesn't even include the construction time!

Now compare this to lithium brine extraction, which can cost between $163 and $314 million. Of course, construction is also far less time-consuming due to the landscape.

To put it simply, lithium brine is simply less capital-intensive: 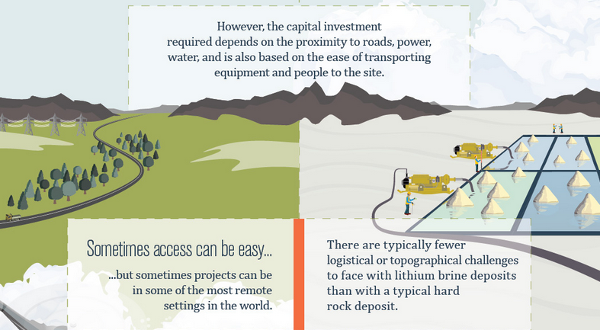 It's all in the name: lithium brines are found in salt flats, which are already surface-level or near surface-level flat lands. And the concentration of lithium is also higher in brines, where water has already separated it from other minerals in the earth.

It also turns out that two-thirds of global lithium reserves are found in lithium brine deposits.

Make no mistake; that Gigafactory is expected to start production in about a year, and it's not the only such factory coming online — just the largest by a long shot.

Thing is, Albemarle isn't the best of the bunch here. Even though the company is developing domestic brine assets, it's still behind compared to some of the other smaller players.

Consider instead Western Lithium (TSX: WLC), which has holdings in Kings Valley, Nevada. This company doesn't bother with hard-rock mines at all — its production comes from lithium-rich brine water and clay.

In the past two years alone, Western Lithium's stock has gained 206.7%, while Albemarle has in fact dropped more than 23%. Though Albemarle still has a staggering lead in market value, it's not likely to yield as much for new investors.

As I've said before, the smaller companies with room to expand is where the real opportunity is right now in the lithium revolution.

In fact, there are still several of these companies that hold more potential than both Albemarle and Western Lithium, and a handful of them are flying under Wall Street's radar. You can still pick up a select few at a tremendous discount.

As you read this, I'm putting the finishing touches on my latest investment report, which will not only show you how to navigate the burgeoning lithium revolution taking place right now but also reveal three lithium stocks that the rest of the herd hasn't caught onto yet.

You can expect this report to hit your email inbox soon, so stay tuned.