Check out this headline… 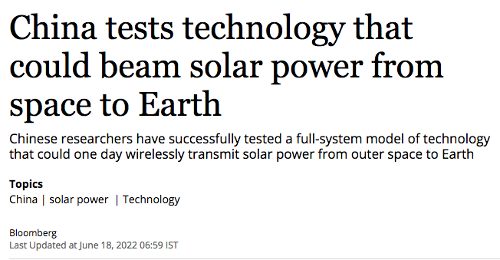 Can you imagine that?

Powering the entire globe by beaming solar power down from space?

Yeah, I can’t imagine it either.

Here’s how it works…

A power station captures sunlight in space, converts it into microwave beams, and then transmits those beams to a receiver station on Earth where those beams are converted back to electricity.

Researchers claim that with this technology, we could potentially provide all the electricity the world needs from solar.

Which begs the question… Why?

I’m probably one of the most bullish people you’ll ever meet when it comes to solar.

Not only did I make a fortune in the solar game back in 2006 and 2007 and continue to profit from some of my earlier investments in the space, but it’s just a fascinating technology that continues to build market share in our overall energy economy — particularly as production and installation costs plummet.

On a levelized cost basis, solar is the cheapest form of energy, and that advantage continues to grow as capital costs for competing energy sources increase. And with energy intelligence technology, storage, efficiency and conservation measures, the whole “the sun doesn’t shine at night” argument becomes nearly irrelevant.

Bottom line: Solar continues to crush it and the industry's growth shows no signs of slowing down. 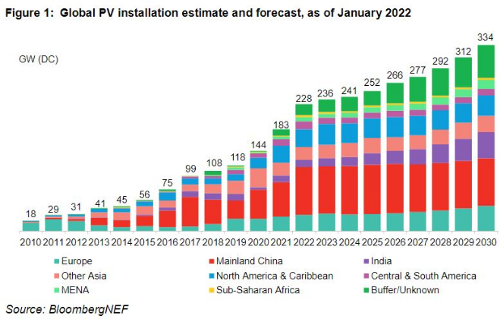 And this is based on workable technology we have today, which is not cost-prohibitive.

So why spend billions of dollars to create a new solar technology that will not only be cost-prohibitive but would also come with significant risk if we were to assume it would be our primary source of power.

Only a fool would suggest NOT having a well-diversified grid, complete with everything from solar, wind, and geothermal to nuclear, natural gas, and hydro.

Of course, researchers in China aren’t the only ones looking to hitch their wagons to this idea.

Back in 2013, the California Institute of Technology landed a $100 million grant to launch its own space solar program.

While I’d be lying if I said I didn’t find the technology fascinating, I would argue that pinning our energy hopes and dreams on beaming solar down from space is an absolute waste of money and resources...

Particularly when there are newer, more advanced solar technologies that don’t cost $100 million to research and are actually being deployed right now.

Take this solar window, for example. 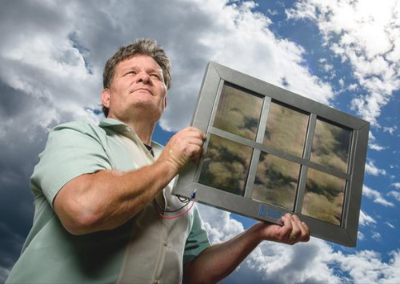 It looks pretty similar to a regular window...

But it’s not a regular window.

It’s a window that generates electricity from the sun, just like a solar panel, but instead of a bulky panel attached to your roof, the solar cells are integrated into the window itself. And the technology can actually be affixed to any flat surface — the sides of a skyscraper, an electric car, even your own home.

It’s already being deployed and tested.

It doesn’t need to be beamed down from space, and it doesn’t even need to be connected to a centralized grid.

With this new solar technology integrated into your own home, your home essentially becomes its own power plant.

And again, this exists right now...

Not in a university lab or in the minds of some very smart engineers but in real life.

And the company behind it is on the verge of completely disrupting the entire solar industry.

Look, I’ve been in the energy investing game for more than two decades, and I helped make investors an absolute fortune in the early days of the solar boom.

But to be honest, once solar became mainstream, most of those opportunities dried up.

And I really saw few new opportunities to profit from solar. So for years, I stopped recommending solar stocks. There just weren’t any decent opportunities to make a lot of money in the space.

I want you to get a piece of this action too, which is why I put together this short presentation on how this solar window technology works and, more importantly, how you can profit from it.

While I don’t believe solar will ever be our primary source of electricity generation, I do know for a fact that this new solar window technology is about to command an even bigger percentage of the overall energy market.

And once you see the evidence for yourself, I think you’ll agree.