Ever since the Fukushima Daiichi disaster in 2011, uranium production – and investing – has seen a rapid fall from grace as the darling of energy.

With the Chernobyl and Three Mile Island disasters a distant memory, nuclear had become a go to compromise for both sides of the political spectrum in the early 2000s; a cost efficient technology with practically zero emissions was a win win.

But after the massive earthquake and the resulting meltdown and evacuation in Japan, Uranium prices tumbled to record lows.

In fact, if you read the major media outlets, it seems the only nation interested in uranium and nuclear since 2011 has been Iran.

Take a look at this chart... 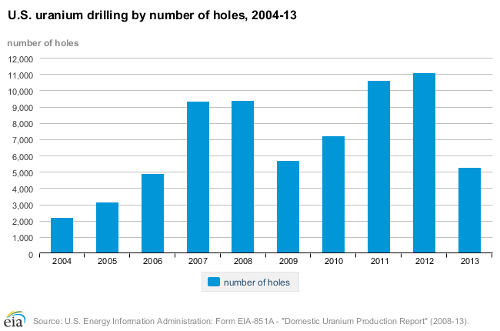 As the 2000s chugged on we saw a drastic increase in uranium drilling, and after the financial crisis and housing market crash uranium saw a rapid rebound to even higher prices and production.

After 2011 and 2012, countries including Japan, Germany, and Italy, placed a stop on nuclear energy that slowed uranium drilling by 76%.

When prices were well above $70 dollars, uranium seemed to be headed into the stratosphere, but now prices are under $30 and could be at a bottom that we won't see again for a very long time.

On the bullish side, even though there were less mines drilled in 2013, the U.S. still produced more uranium in the prior year.

This comes as the U.S. and China are looking to increase their nuclear energy profile, but only time will tell if they actually follow through with these plans.

Even Japan is already hoping to restart their nuclear program despite the recent meltdown. It could happen than you might think, too.

Think about it... right now Japan is paying almost $16/MMBtu of natural gas.

On the bearish side of the spectrum, however, Germany is planning to phase out all nuclear power plants by 2022, and Italy has halted any future construction on nuclear plants. Moreover, protests over nuclear energy have been growing in countries like Spain, Sweden, Switzerland, India, and Taiwan.

Still, uranium will go up from here – the question is when. And I have a feeling that once Japan feels the heat this summer, they'll quickly move back into nuclear energy, even with the potential safety risks.