I Hit a Tesla This Morning, and I Liked It... Again

I hit a Tesla this morning, and I liked it… again.

The moment I felt the jolt from bumping into it, an overwhelming wave of déjà vu washed over me. I knew I’d been in this situation before.

Of course, my seasoned readers here at Energy and Capital know full well that this wasn’t my first minor scrape with a child of Musk.

My last run-in with a Tesla occurred nearly four years ago, except back then it was a Model S, which was a rare sight in Baltimore at the time.

I didn’t mind it then, and I certainly didn’t earlier today.

And soon you’ll see exactly why I wasn’t surprised by the trivial fender bender this morning. The more I think about it, the more I should have seen it coming.

However, we don’t have to go too far back to see what’s taking place right under our nose

Yet this history lesson will prove to be one of the most profitable ones we ever learn.

Well, because it’s far from over.

A decade ago, few people were talking about electric vehicles. Back then, the EV market was considered a niche part of the auto industry.

Even fewer were investing in its future.

Sure, Nissan debuted its Leaf in December 2010, but it was only sold in Japan, Europe, and the United States.

It was a tiny blip on the radar.

Over the years, however, some people started to take more notice.

Now, I’ve never been a major fan of the International Energy Agency (IEA). Most of the time it feels like its forecasts are built to be revised, especially in the oil markets.

So when the IEA projected that global electric car stock — which was all but nonexistent when the Leaf hit the market — would range between 9 million and 20 million units by 2020, it was hard to take it seriously.

As you can see below, though, the growth experienced over the last 10 years has been nothing short of incredible: 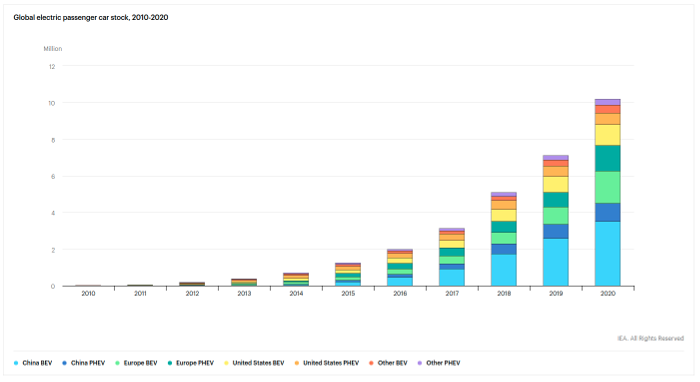 The IEA finally got it right!

But it gets much, much better for us.

Last year, EV registrations jumped by 41%. Keep in mind that this was during a pandemic that utterly decimated the global economy. And despite a 16% decline in auto sales worldwide, roughly 3 million EVs were sold, representing a nearly 5% share of global sales.

According to the IEA, electric car sales rocketed 140% higher year over year during the first quarter of 2021.

Like I said, I wasn’t surprised to find a Model 3 under my bumper this morning.

Looking into the past like this does more than simply give you a little FOMO, though.

I know it’s easy for an investor to feel like they missed out. And if I really had a DeLorean with a flux capacitor, every one of us would be rich.

Back then, it wasn’t an easy decision to put your hard-earned money into EV investments.

When you factor in the unprecedented tight oil boom that took place in the lower 48 states, the ensuing surge of U.S. oil output to record-breaking levels, and the subsequent drop in gasoline prices, it was tougher to convince people that the EV revolution was taking off.

Today, the enormous growth trajectory of the EV market should be clear as day: 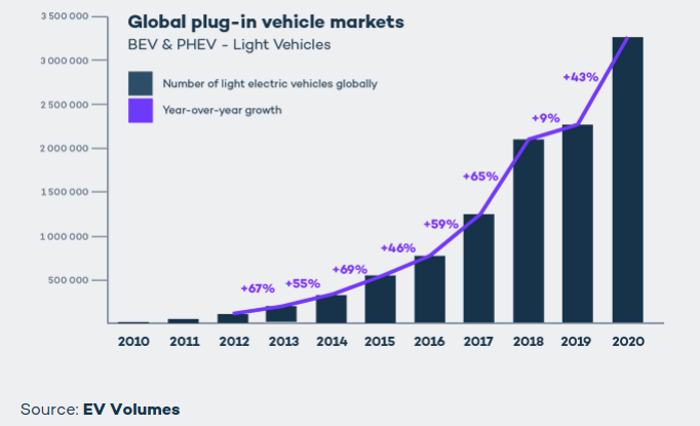 The only question left for individual investors like us is how to take advantage of the next stage of the EV revolution.

You see, the most lucrative stocks left in this boom aren’t your typical EV investment.

You and I both know that auto makers like Tesla are wildly overbought right now.

And the simple, bitter truth is that it’s far more profitable to milk our profits from the major auto companies, all of whom are betting the house on all-electric fleets for the future.

But you don’t have to worry about which major auto maker will come out on top because there’s a way to capitalize ALL of them at once!

Don’t believe me? Well, let me show you precisely how to do it. I strongly recommend you give me just a few minutes out of your day and see firsthand what my research has uncovered.

You can find all the profitable details behind this under-the-radar EV investment for yourself right here.