The climate rebels were out in full force on Monday.

And whether you love or hate them, there’s no question that they can put on a good show.

This time, they hung up their kayaks, grabbed Sharpies and their biggest poster boards, then got in their gas guzzlers to brave the tumultuous D.C. traffic to do their part to shut down as much of Capitol Hill as possible for the day.

Don’t worry, this time policymakers will be forced to act, right?

How could they not?

Nothing screams "we need to shut down global energy markets" more than a cleverly worded phrase about how there’s no "Planet B," then chaining yourself to a boat in the middle of an intersection until the cops can cut you loose.

If you get thirsty, just bring a few plastic bottles of water along with you.

Hey, more power to them.

Except there’s one slight problem here…

If they truly wanted to combat climate change, they were doing it in the wrong place.

The reality is that the U.S. has actually been lowering its emissions for the last 14 years. 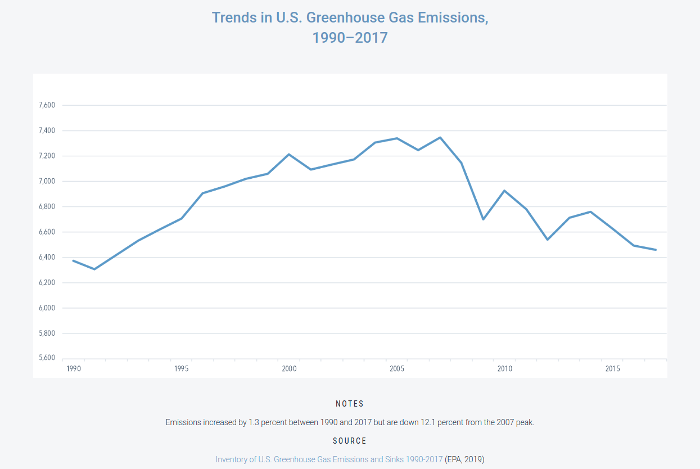 Yet it’s NOT because of electric vehicles or because Americans suddenly stopped driving everywhere.

The cold, bitter pill to swallow here is that we’re driving more than ever. According to the stats from the Energy Information Administration, we’re consuming more than 9 million barrels of gasoline every single day.

In fact, carbon dioxide emissions from our energy usage are increasing in nearly every sector — except just one!

The sector that’s responsible for the biggest decline in our emissions is the electric power sector, which also accounts for the largest share of emissions.

And make no mistake: The reason this is happening is due to the transition we’ve made from coal to natural gas and wind.

Specifically, it’s because of the massive supply of natural gas that has come online over the last 10 years.

And considering that nine out of ten wells today must receive some sort of fracture stimulation, think hard about the havoc a total ban on frac’ing would have on our emissions.

But when I said these protesters were demonstrating in the wrong city, I wasn’t lying.

Those protesters shouldn’t be in Washington, D.C.

They should be in Beijing.

My colleague Christian DeHaemer hit the nail on the head yesterday when he told you it was a lie that coal was dead.

There’s no question that the U.S. coal industry is in peril.

Last year, more than 13 GW of coal-fired capacity was retired.

In 2018, almost 600 million short tons of coal was shipped to U.S. electric power plants; we haven’t seen levels that low in 25 years.

However, the Asia-Pacific region is a much different story.

Here’s a look at global coal production and consumption by region: 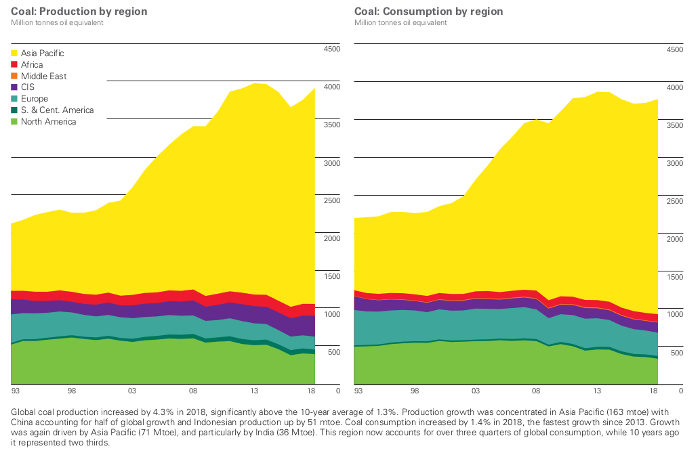 While coal demand in 2018 fell by 6% year over year in North America, consumption jumped 2.5% in the Asia-Pacific region.

Not surprisingly, the two biggest consumers were China and India.

And even though India inked a huge 7.5% LNG deal with Tellurian a few days ago, it turns out that China is going full throttle developing its coal industry.

For the record, coal’s share of China’s energy mix is around 60%.

More importantly, consumption is even higher this year.

Let that sink in for a second.

Now take advantage of how China will quench its thirst for more coal.

Here’s how you do just that.