Hot Stock Tips from the Bartender

The Dow Jones Industrial Average has been up 11 days in a row. As we know from the cult classic Spinal Tap, that’s one more... 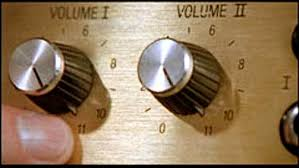 Market trends average from three to five days. Eleven is a trend that hasn’t happened since 1987, when the DJIA went up 13 days. Of course, in 1987 the market suffered its worst one-day drop ever on Black Monday, October 19, when the DJIA shed 23% of its value. Could you imagine the market giving up $4 trillion in a day? Because that's what we are talking about.

There are a couple of looming catalysts that could kill the bull market and maybe even send it on a heart attack-inducing drop like 1987. After all, we are far from the bottom. The S&P 500 has a price-to-earnings ratio at 26.5. It has only been higher in 1929, 1999, and 2007. Those are classic market tops.

There is a story about Joe Kennedy, father of the president, and famous rich-guy bootlegger at the time. He got out of the market when a shoeshine boy gave him a market tip. In a similar vein, investor Bernard Baruch wrote:

Taxi drivers told you what to buy. The shoeshine boy could give you a summary of the day's financial news as he worked with rag and polish. An old beggar who regularly patrolled the street in front of my office now gave me tips and, I suppose, spent the money I and others gave him in the market. My cook had a brokerage account and followed the ticker closely. Her paper profits were quickly blown away in the gale of 1929.

Well, I’m not sure we are there yet. But anecdotally, I did get a tip from my hipster bartender last night telling me I should buy the Snap IPO, which is set to go public on March 2.

(As an aside, you should know that the lockup period is 180 days. That is the date when insiders can sell. I’ve done a lot of research on IPO charts, and the time to buy is about a month before lockup expiration. Never buy the IPO unless you plan on selling fast. And even that is a sucker's game.)

Starting tomorrow night at the State of the Union speech, the Trump budget will set off an epic fight between the Tea Party Republicans and the president.

Trump wants to increase spending on the military and infrastructure. Trump will ask for “drastic cuts” to domestic agencies such as the State Department and the EPA and other non-defense programs. But of course, he could say anything that would trip up the market.

All we know for certain is that resistance from the deep state and the media will be shrill.

The second catalyst comes from the Fed. The next Federal Open Market Committee will meet on March 14–15 and could hike rates. Many members said that if jobs data and inflation were in line or stronger than their current expectations, they could hike rates “fairly soon.”

The January jobs report showed a 4.8% unemployment rate, with average wages up 2.5%. Employers added 227,000 jobs in January, beating expectations of 174,000. That’s about as good as it gets for official numbers.

As you can see by this chart, the inflation rate has been climbing.

Three Steps and a Stumble Rule

There is a hoary old Wall Street adage that goes “three steps and a stumble.” Historically, when the Fed starts to hike interest rates, the market goes up, blissfully unaware of the hikes. That is, until the Fed hikes the third time (the Fed has already hiked two times).

If the Fed raises interest rates three times in a row, this is taken as an indicator that it intends for interest rates to remain at a comparatively high level for the foreseeable future. This leads investors to sell stocks, because the businesses underlying the stock now have the added cost of high interest rates, which reduces profits.

It should be noted that this market has been buttressed by cheap interest rates for nine years. Companies have borrowed cheap money to buy back shares, thereby increasing earnings per share. If there are fewer shares out, then EPS goes up. It's a sham... smoke and mirrors... an accounting trick. There is little organic growth. If you think a 26.5 P/E ratio is high, imagine what it would be without the buybacks. Then start thinking about how those companies will pay back the loans when times get tough.

Furthermore, growth in global trade has slowed for five consecutive years. It was under 2% for all of 2016. The last two times since 2000 it dipped below 2%, we’ve had a recession. Trump is very likely to spout anti-trade rhetoric tomorrow night. It might be good for U.S. workers over the long term, but it will be bad for the markets on Wednesday.

Don’t get me wrong; I'm not a seer. I don’t cut open goats and look at their entrails to predict what will happen in the market. I can, however, look at history and determine that we are a lot closer to a top than we are to a bottom. It’s true that the market can go up a lot longer than investors can remain solvent betting against it.

But I’m also hedging my bets by owning some TVIX in my trading service Crisis and Opportunity. TVIX is the ticker for the VelocityShares Daily 2x VIX ETN. It is the most volatile investment vehicle there is. It shoots up when the market sells off.

Don’t buy it if you don’t have money to lose. But it's a good insurance policy against bad times. And if it does pop, sell. It’s not a trade you sit on.

War Rides a Red Horse
Energy and Capital editor Christian DeHaemer talks about the boom in global defense spending and which stocks will profit from it...
Paps Hated FDR So Much He Wouldn't Use Dimes
Just like in 1930, we have economic experts warning our president not to go down the road of trade wars. Like Hoover, Trump's not listening.
Sell This Subprime Death Stock Now
Energy and Capital editor Chris DeHaemer explains why THIS stock could be the next subprime debacle...
Hydrogen Fuel Cells: The Downfall of Tesla?
Lithium has been the front-runner in the battery technology market for years, but that is all coming to an end. Elon Musk is against them, but Jeff Bezos is investing heavily in them. Hydrogen Fuel Cells will turn the battery market upside down and we've discovered the tiny company that is going to make it happen.