The price of uranium increased some 450% in a matter of months after the flooding of the Cigar Lake Mine in Saskatchewan (the largest undeveloped high-grade uranium deposit in the world) created fears of short-term supply constrictions.

But the boom didn't last. The price of uranium fell just as rapidly as it had risen.

Prices then slightly recovered in 2010. But less than a year later, the Fukushima disaster put the final nail in the coffin for short-term uranium prices. After Fukushima, no one wanted anything to do with nuclear power.

It has been one of the worst performing commodities over the past several years. But there's good reason to believe uranium prices may have bottomed and will be on the rebound in 2017.

Nuclear power gets a bad rap. But it's already a critical player on the global energy stage and is set to drive the U.S. and rest of the world into the future. A big reason for that is political.

In terms of carbon emissions, nuclear power generation creates none. In fact, nuclear power is the single largest contributor to carbon-free power in the United States, accounting for 60% of the “clean” energy generated in America. What's more, nuclear power plants are the most efficient "clean" energy source, running at 90% of capacity — far above solar, wind, and hydroelectric power plants. 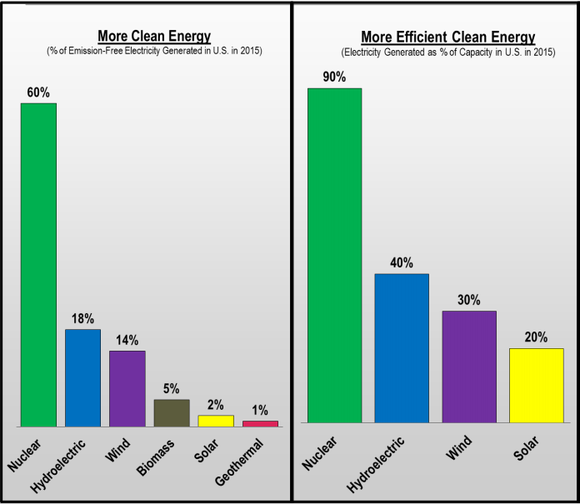 There are around 60 active nuclear reactors in the United States. And while there are no immediate plans to build more in America, nuclear power remains very politically approachable.

Meanwhile, other nations have already begun rapidly expanding their nuclear power output. China, for instance, has 35 nuclear reactors currently active. But with a population of 1.4 billion people and growing, the country is still very energy-hungry. To help meet growing energy demand, China has 20 new nuclear facilities currently being constructed. And the nation has plans to build 177 more!

China isn't the only large developing nation expanding nuclear capacity. India is also rapidly moving toward nuclear power to meet energy needs. There are 22 nuclear power plants currently online in India, with another 71 planned, proposed, or currently under construction.

With the proliferation of nuclear power around the world, the price of uranium seems set to soar. But there's one problem that uranium prices will have to face before moving any higher: supply.

There is a significant glut in global uranium supplies right now, which has pushed uranium prices down to multi-year lows. But that might be changing...

Last week, Kazakhstan, the world's largest uranium producer, announced the country would be cutting output by 10% this year due to lower prices, triggered by the global oversupply. The state-owned Kazatomprom said 2017 production will be reduced by 2,000 metric tonnes — about 3% of the total global output.

The news pushed uranium spot prices up 10% to $22 per pound, but still well below the long-term price of $30/lb.

With significant supply cuts and rapid global expansion of nuclear infrastructure, the current supply of uranium cannot satisfy the world's long-term needs. And the future of uranium prices is starting to look great once again.