At last look, gold was sitting at $1,755 an ounce, but rising concerns over global inflation have positioned the yellow metal for a breakout that could take prices screaming higher.

Bank of America is already expecting $3,000 gold. Others are predicting prices to top $5,000 or $10,000 an ounce and while $10,000 an ounce might seem far off from here, you may better understand their perspective when you see just how much new money central banks have created in the past few weeks.

Preliminary data released Friday from the U.S. Census Bureau showed April retail sales falling over 16% as the coronavirus lockdown suffocated consumer spending. I think it's a pretty safe bet  May retail sales will be just as dismal.

These and other data points have led to some nasty GDP forecasts for the second quarter. Yesterday, Chairman Jerome Powell said the COVID-19 pandemic could easily cause the American economy to fall by 20% to 30% in this quarter.

A forecast from the Federal Reserve Bank of Atlanta was even grimmer, estimating a 42.8% decline in the U.S. GDP, during the second quarter.

U.S. GDP in the first quarter fell 4.8%, but shutdowns affected only part of the quarter.

On Friday, Germany also reported its first-quarter GDP fell 2.2%, the steepest contraction for the nation's economy in 11 years. The announcement follows a procession of brutal economic data across the eurozone. The U.K.'s GDP dropped 2% in the first quarter, while the GDP of France and Spain fell by 5.8% and 5.2%, respectively. The eurozone economy, as a whole, contracted by 3.8% during 1Q.

In a scramble to pay for massive government spending programs aimed at providing relief from the pandemic, central banks around the world are expanding the money supply at an unprecedented rate.

In the past three months alone, the U.S. Federal Reserve has expanded the money supply (as measured by M2) more than throughout its three QE programs in response to the 2008 financial crisis. 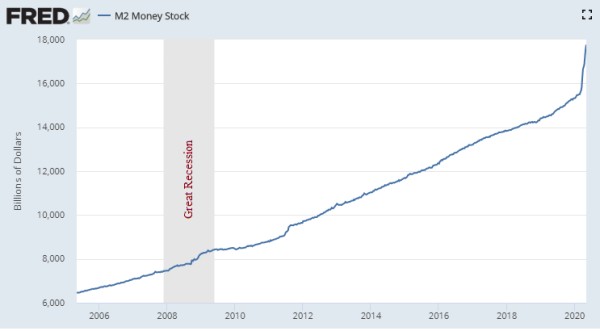 The increase in M2 is almost vertical.

Elsewhere around the world, the story is the same... 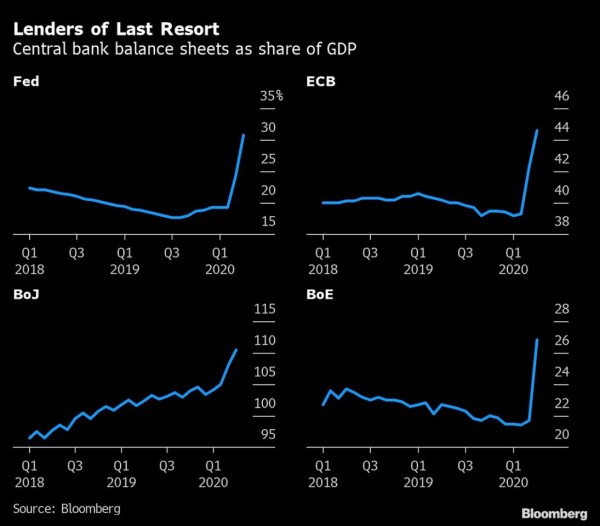 The U.S. federal government has already committed over $3 trillion in relief for COVID-19. But with entire economies on lockdown, tax revenues are plummeting. In addition to filing extensions, income tax revenues have fallen off a cliff, with over 30 million Americans unemployed, for three months.

And, of course, the U.S. is not alone. This same thing is happening all over the world.

So governments did what they had to do to raise the money for relief: They monetized debt. Central banks put the printing press into fifth gear and bought their government debt to pay the bills which will go down in history as the biggest expansion of global money supply to date.

There is much debate right now over whether or not all this new money will cause concerning levels of inflation in the coming months. On the surface, it might seem obvious that inflation will create inflationary pressures, but it really depends on how fast the economy can get back on track.

Right now, low demand for consumer goods like clothing, furniture, and non-essentials are putting downward pressure on prices (deflation) nearly across the entire market. Food prices are an exception, due to, high demand and supply issues. And a long slow, return to spending may curb inflation in the coming months. With so many unemployed, it doesn't seem likely consumer spending will immediately bounce back.

Nevertheless, it hardly matters for gold.

Investors buy gold on the fear of inflation. The whole idea of a safe-haven asset is protection. And in gold's case, that's traditional protection from inflation.

If investors fear inflation, they buy gold driving up the price. And with the gargantuan monetary and fiscal response to COVID-19, governments, and central banks have to build a house of tinder for inflationary fears to quickly flare up.

Right now, I think the trend is your friend. Gold prices have been marching higher over the past several weeks, and they don't seem to be stopping for many breaks. If inflationary fears flare up as a result of massive money creation programs, which we do believe likely, gold prices will most certainly take off.