Gold and Silver Break Out, FAANG Gets Bitten 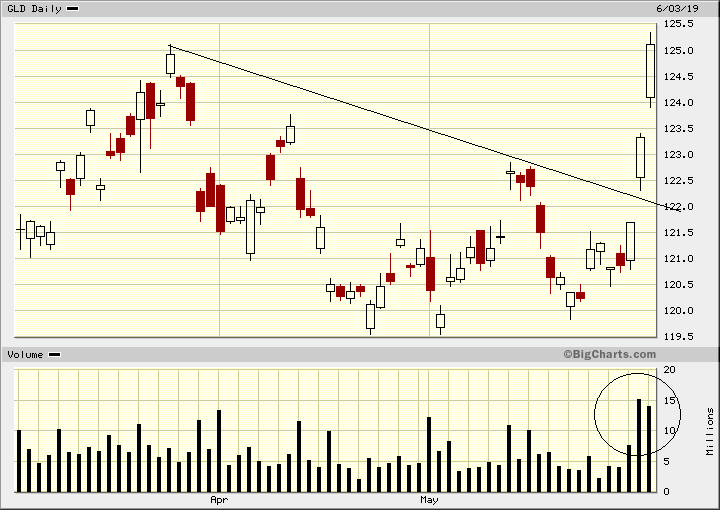 Gold has been bouncing around $1,300.00 an ounce for the past five years after peaking in 2011. If it can hold this breakout above that resistance, there is a lot of upside.

Markets that consolidate for a long time act like a coiled spring. The rule of thumb is that they move higher the same distance they went sideways.

This latest action in gold is more remarkable in that it went up during a period when the dollar was strong. It is also worth noting that FANG stocks and cryptocurrencies like Bitcoin were down.

As Luke told you yesterday in Energy and Capital, for the past five years, gold hasn’t reacted to negative events in the markets, whereas Bitcoin has seen prices jump during global crises.

Right now, the Trump administration is taking on the world in terms of trade wars. Let me remind you that a tariff is just another word for tax. They increase the cost of doing business. Tariff fights with India, Mexico, Canada, China, and now Australia don’t bode well for the short-term market. No one wins a trade war.

Despite Bitcoin's recent doubling, there are a lot of investors who bought at the top and lost a lot of money in crypto. It is unsurprising then that they are seeking refuge in gold and silver, which have held their value for 5,000 years.

They say you could buy a nice toga in ancient Rome for an ounce of gold. $1,300 will still buy you a nice suit.

The Department of Justice and the Federal Trade Commission have started investigating whether Facebook, Apple, Amazon, and Google have violated antitrust laws.

Antitrust investigations into big tech are long overdue and will be backed by both parties as the Democrats put some blame on Google and Facebook for losing the last presidential election. Even a cursory look into the practices of these companies reveals reprehensible business practices with heavy doses of manipulated and false data, working with enemies of the state, competition destruction, and customer abuse.

I can’t wait to see what fungi-infested rot a deep investigation will puke out the other end.

My prediction is that big tech will lose these lawsuits after a long, drawn-out, cash-destroying, reputation-smashing fight.

If I were a betting man, and I am, I’d say these stocks have peaked for the medium term.

Antitrust cases tend to happen at the top, long after all the dynamic growth has taken place. When Microsoft lost its browser war case against Netscape, the stock went sideways for 13 years and didn’t hit a new high for 17 years. That’s an entire generation.

That said, breaking the Microsoft monopoly was good for the economy, the tech business, the market, and the country. You could argue that without the antitrust case, you would have Bing, Myspace, Xbox, and Azure instead of Google, Facebook, Xbox, and AWS.

The downside in equities is obvious. FAANG stocks were market leaders (and Netflix isn’t looking great). Without a rotation, the market will be sailing upwind.