Flashing Red Sell on the Nasdaq

Would you buy this or sell it?

The chart below is the Nasdaq going back to 1988. Each candlestick represents three months, or a quarter. 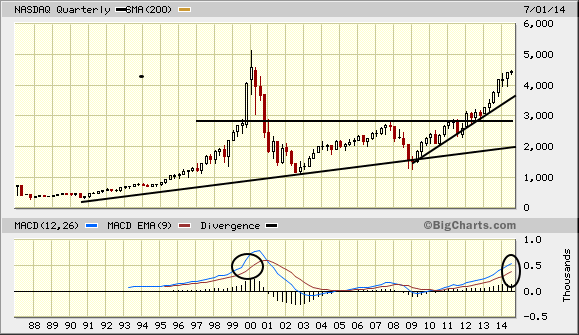 What we have is a long-term chart pattern that looks a lot like a double top.

The double top is a classic bearish reversal pattern. As its name implies, the pattern is made up of two consecutive peaks that are roughly equal, with a trough in between.

The most well known double top is that which occurred in the S&P 500 back in 2008, which you might remember as a bad year for buy-and-holders. 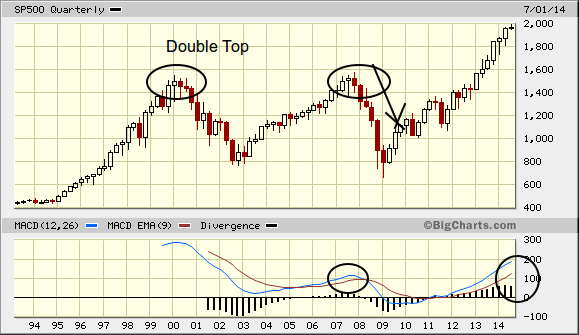 Of course, double tops aren't always fulfilled. But when they are, the share price drops between 15% and 20%.

Another reason to fret is the fact that there have been seven up quarters in a row, well above the trend average of three to five. There is a doji cross at the top of the last run up, and volume has been falling for years.

The MACD is also looking like we are three to six months away from a correction.

There are plenty of fundamental reasons to be bearish. The stock market continues to push all-time highs, while undervalued stocks are hard to find. Again, this week, my super-value stock screen returned zero buys.

My less-stringent value screen is returning Chinese real estate companies, but it is near impossible to believe the numbers on those guys. Though it may turn out to be a great buying opportunity in retrospect, I just can't pull the trigger. The fact that China's total debt is now 251% of GDP doesn't point to a strong recovery there.

Back in the U.S., the housing market numbers are coming in weak with no bad weather to blame. Manufacturing is off. Retail is down, as shown by Amazon getting crushed. Target has been falling all year. And Wal-Mart just fired its CEO.

The stocks that are moving are doing so on takeover rumors like Trulia, because they're going private like SodaStream, or because they have something to do with fracking, thorium, or hydrogen power.

All of your agricultural commodities from wheat to corn are falling rapidly. Despite many international crises in oil-producing regions, oil remains just over $101 and dropping. Natural gas is below $4 again. Coal is looking promising down here, but you might want to wait a few weeks. I like the Coal ETF (NYSE: KOL) at $18.50.

I don't know if the Nasdaq is going to crash, but I do know it's not at a bottom. This is not a “buy low” moment. You can buy high and sell higher, and many people do.

One thing you can do is protect your gains by laying in some put options. Puts are simply bets that make money when stocks go down.

For example, if you think the Nasdaq is going to correct in October, you can buy puts on the Nasdaq ETF. The ETF is called "three Qs" because its symbol is "QQQ."