Here is your S&P 500 index over the past two months: 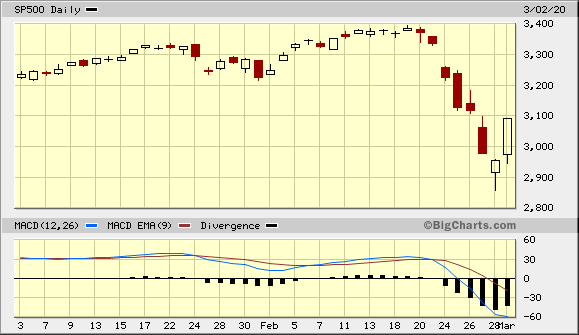 This a classic example of a dead cat bounce. Stocks tend to bounce back 33% from the low. I expect we will fill that gap at 3,120 and sell off for the rest of the week. 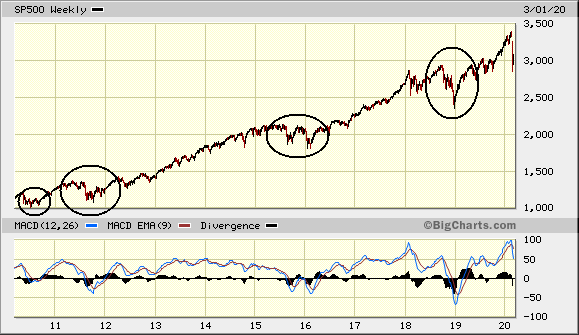 As you can see, we’ve had four selloffs in the last 10 years that have broken the up trendline, not including this month. Out of those four, only one put in a “V” bottom. The other three put in several lows that retested the support line.

You will also notice that the MACD (lower indicator) always went negative before rebounding. Today, we aren't even close to negative. Nor have we retested the lows.

Right now, the market is pricing in three or four rate cuts this year. The Fed cut 50 basis points today in an emergency move. The idea is that they will follow up with two more cuts at the end of the year.

The international group of finance ministers of the seven largest economies or the G7 put out a statement today that it is willing to take action to help the global economy but didn’t say what those actions will be.

There has also been a host of upgrades for Apple, GE, Micron, JPMorgan, Verizon, and many more as analysts try to push up their stocks.

Don’t get me wrong, there are a number of stocks I’d like to own, Disney looks pretty good at $119 for instance. But it pays to have patience. Now is time to build your list of stocks you want to own and the price you want to pay for them.

For next year, I see three dominant trends: Fintech, Space, and Sports Gambling.

Fintech, because technology is growing exponentially. I've written about financial technology a lot.

Space, because we are at a turning point in commercial space travel. Virgin Galactic Holdings (NYSE: SPCE) went from $6.90 to $42.49 over the last three months. Though it got hit last week and sold off to $25. They have a p/e of 458, which by the way, is stupid expensive.

I actually met a guy who has some space tickets, and he seemed excited. You can own some, they are selling for $250,000 apiece. However, the bang for your buck seems limited. The flights will be just 90 minutes with four minutes of weightlessness.

It is now the wild west with companies trying to build market share. Many of those companies got hit hard over the last two weeks, losing as much as 30% of their value as there is now speculation of crowds avoiding sports venues for fear of coronavirus.

It is a bit overdone and a good place to look for big growth companies.