A Flood of Canadian Crude

Let the offshore war wage on.

Judging from the amount of red tape stretched around the steps of the Capitol building, it's difficult to believe they'll ever come to an agreement.

Take their latest battle, for example...

If you remember the last time we talked about the Republican-led charge to open up offshore oil and gas drilling, there was a small part of us that hoped the Senate would follow suit.

That definitely wasn't the case.

A week later, a measure to open up Virginia waters to offshore drilling fell short in a 42-to-57 vote on the Senate floor.

Though opening up offshore development comes too late to stop higher gas prices at the pump this summer, politicians will eventually realize it's one of the few ways we'll be able to reduce that nasty OPEC oil habit we've had for several decades.

Unfortunately, getting the political machines to roll smoothly is much easier said than done.

Good thing for us there's another option...

A Growing Trend for Profits

You see, it's not that we'll ever rid ourselves of foreign oil — not anytime in the near future, at least.

Oddly enough, that isn't their plan.

Making his latest case for oil independence, notice Obama isn't against foreign oil imports; just those barrels coming from the geopolitical hotbed we know as the Middle East.

We're still on the mighty OPEC's tab to the tune of almost five million barrels a day. 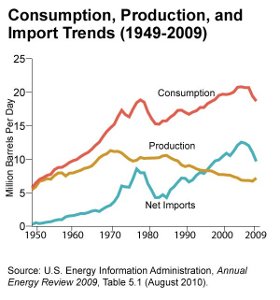 The tricky part is realizing that cutting every drop of our oil imports is an impossibility. We'd have better luck telling every American to buy a solar-powered car before 2012.

For all of our bullish sentiment toward domestic production, adding an extra five million barrels a day to officially bid OPEC adieu won't happen...

We know where we're going for more oil. Our country's leader already said as much when he hinted at where we'll make those import cuts and who will pick up the slack.

Believe me, dear reader, it's not some mysterious force that we'll look to for help...

We can expect that flood of crude to flow across the Canadian border.

Because in the end, it boils down to supply security.

And can you possibly think of a less politically volatile source for oil than Canada?

The Head of the Class: Canadian Crude

Imports have continually increased, as you can see for yourself below:

Pretty soon, that amount will grow to over three million barrels per day. And I wouldn't be surprised to see us break through that record within the next three months.

Still not convinced the U.S. government has its eyes set on Canadian crude?

If you think 2.8 million barrels a day isn't much, close your eyes and imagine adding another million or so on top of that within the next few years. That alone could practically cancel out Saudi oil imports.

TransCanada (NYSE: TRP) is hoping its Keystone XL pipeline project will get government approval in the States by year-end...

Proposed in 2008, the 1,709-mile pipeline would ship crude from Alberta's oil sands directly to oil hubs in Oklahoma. Once completed, the pipeline would add approximately 700,000 barrels a day of oil sands production to U.S. refineries.

And TRP isn't the only one expecting a boost in oil sands production in the near future. Enbridge (TSX: ENB) is hoping to tap the growing oil demand in Asia by building a $5.5 billion Northern Gateway pipeline to the BC coast.

Then again, there's a much more profitable way to invest in our ever-increasing desire of Canadian crude, and it comes by way of the future of oil sands production.

Only One Road Ahead for Canadian Oil

We've heard the nightmarish stories before, with harsh images of massive trucks raping the landscape in order to dig up the highly sought-after bitumen...

The first time I saw those huge surface mining operations from the air, I could hardly believe my own eyes. And had some of my more environmentally-conscious colleagues been with me, they would have immediately asked to land.

But many of us are well aware of the fundamental shift happening right now in oil sands production.

And we know future production from the oil sands lies in those companies that are able to efficiently extract the bitumen buried too deep to be simply shoveled away.

It's the reason my readers are staying ahead of the curve — and why their latest in-situ profits stem from a leading SAGD play that's expanding its operations at a feverish pace.

These Canadian companies hold the true long-term value in the oil sands patch...

Especially when you consider the fact that they're the ones tapping into 80% of the entire oil sands resources.

P.S. With our growing dependence on Canadian crude, increasing our domestic energy supplies has become even more imperative. My colleague Ian Cooper has uncovered one of the few places left in the United States that offers Americans hope for energy independence... and it's precisely where they're about to tap an energy source that could replace oil. Get the inside scoop on the company taking the shale game by storm in Ian's latest investment report.