Are You Still Living in a Pipe Dream?

Believe it or not, most people still have pipe dreams when it comes to the U.S. oil industry.

You know the kind... They latch on to any hope they can find. And though they haven't looked into the problem with much detail, they're confident that everything will turn out all right.

The sad truth is that too many Americans fall under that category.

I can only hope you take a closer look at the situation.

Last month, Obama declared his goal for the United States to cut its oil imports by one-third.

But getting away from that pesky foreign oil is easier said than done.

Let's just clarify this: We're not so much interested in cutting our lifeline to foreign oil as we are to OPEC oil. And that's why Obama is still so excited when talking about our "neighbors'" oil production...

The president even went so far as to suggest we'll be a major customer for Brazil.

What he forgot to mention was the years it will take to develop that pre-salt Tupi oil field off the shore of Brazil...

And let's not forget our Canadian friends to the north. Soon we'll be importing more than 3 million barrels every day from them.

We'll just brush Obama's comments about more oil imports from Mexico under the rug for now...

It could happen — if another fisherman randomly stumbles upon a second massive, untapped oil discovery. But we're not holding our breath.

There are other ways to help rid ourselves of OPEC oil: our domestic oil production, for example.

Some of those wishful thinkers might think twice before boasting our increasing domestic production will solve any problems. It's simply a case of too little, too late. Take a look at that production growth (or lack thereof) for yourself: 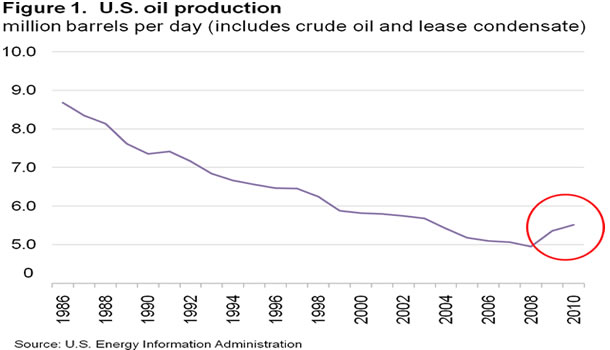 It gets even more interesting when you break down the numbers.

In 2010, two states made up 83% of our production growth: Texas and North Dakota. North Dakota alone made up 60% of that total.

This shouldn't come as a surprise. We've been following success in that region for a long time now...

It's been staring investors in the face for years.

It all comes down to changing consumption habits in both our transportation and industrial sectors. And no sector has as massive a gap to overcome as the transportation sector: 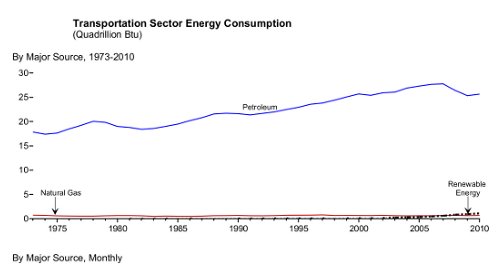 Right now, renewables' and natural gas' share in the transportation sector are neck and neck.

Natural gas, however, has a bit of an advantage...

That edge is due to the up-and-coming shale plays that we've been talking about since the first horizontal wells were introduced to the Barnett shale. Their success spread like wildfire, and the Barnett has been the largest shale gas play in the U.S. — until now...

For the first time ever, the Barnett shale has been surpassed as the highest-producing shale gas play in the United States.

Its successor is located just to the east and is known as the Haynesville shale. It's just one of the emerging shale plays with a vast amount of natural gas resources locked in its formation.

Right now, everyone is getting in on the action. And they're more than willing to pay.

The billions of dollars flowing into shale basins across the States is an ever-present reminder of how vital our vast natural gas resources will become.

And make no mistake — those gas plays have been performing just as well for investors as well: 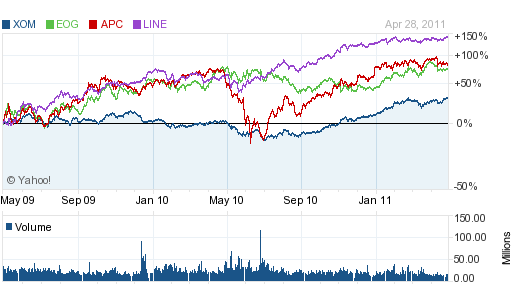 Then again, those are some of the largest oil and gas players operating in the United States.

This morning, I couldn't help broaching this subject with my office cellmate Ian Cooper.

His reply was quick and to the point: “We don't need a $435 billion market cap like Exxon. They're part of the group paying billions for a stake in those shale plays.”

It's true. Their deal for XTO last year gave them a strong foothold in shale acreage...

“Besides,” he continued, “there are a few natural gas gems out there that are still flying under the radar. I can't begin to tell you how profitable they'll become as more drillers go after these gas plays. There's one in particular that I've had my eye on.”

What he told me next had me calling my broker within minutes.