I feel like those words should be the opening to a story about Elon Musk inventing a new type of rocket engine or 200-mph passenger submarine. But, no. Elon Musk and his girlfriend, singer Grimes, had a literal baby and named it X Æ A-12.

As you can imagine, the unusual name sparked a flurry of online discussion and debate with social media users arguing over pronunciation and meaning. And that was probably the intended point. But Musk wasn't through shocking social media there.

Angered by the local government's shutdown of Tesla's Fremont vehicle manufacturing plant in Alameda County, California, Musk threatened to move the car maker’s headquarters and operations out of California in a tweet on Saturday. 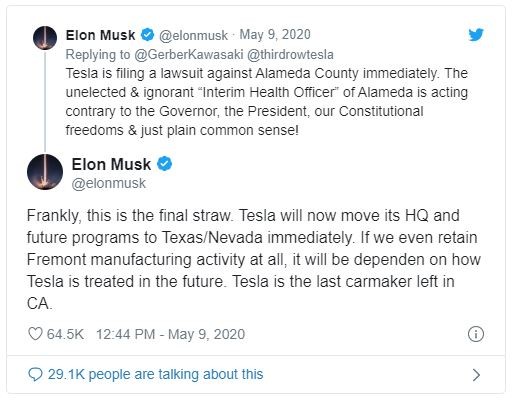 Tesla's Fremont factory has been shut down since March 23, after local authorities ordered it closed as part of social distancing rules aimed at containing COVID-19. In a federal district court filing, Tesla alleged that Alameda County's shutdown order violates the Fourteenth Amendment and there was “no rational basis” for the factory closure in the first place.

California Governor Gavin Newsom's order in March allowed businesses in 16 critical infrastructure industries, including transportation and equipment manufacturing, to continue operations during the outbreak. Yet, Alameda County still ordered Tesla's Fremont factory closed. The company is now seeking a permanent injunction that would invalidate the county's order, allowing it to resume operations as normal.

“We will continue to put people back to work in a safe and responsible manner. However, the County's position left us no choice but to take legal action to ensure that Tesla and its employees can get back to work," Tesla said in a statement on Saturday.

In response to the lawsuit, Alameda County Health Care Services Agency issued a statement saying that the agency has been, “communicating directly and working closely with the Tesla team on the ground in Fremont,” with “a collaborative, good faith effort to develop and implement a safety plan that allows for reopening while protecting the health and well-being of the thousands of employees who travel to and from work at Tesla's factory.”

Others had a more direct message for Musk. California State Assemblymember Lorena Gonzalez, who describes herself on Twitter as a “Mama, Labor Leader turned CA Assemblywoman and Progressive Latina Democrat,” simply tweeted:

Tesla may or may not have a good argument for the court regarding the county's closure of the Fremont factory. On the surface, it seems that if the governor's orders allowed businesses involved in the transportation industry to remain open, certainly Tesla would be included. But there could just as easily be some unconsidered law or regulation that justifies the county's measure. We'll find out. Moving Tesla's headquarters and operations out of California is another matter.

I can't begin to imagine the costs involved with Tesla, moving its entire headquarters and operations out of California. I'm sure states Texas, Nevada, and many others, would welcome Tesla with open arms, cutting the company new tax breaks and promising to enact favorable regulations. But the cost of actually moving will likely outweigh the benefits in many cases.

It's not like there are empty electric vehicle plants sitting around ready to be used. Tesla paid nearly $50 million for the Fremont factory (and that was a deal), then had to repair and upgrade it. So, here's the pitch to investors:

"Hey guys, I know we spent tens of millions of dollars on this EV plant here in California. And even though it's only 10 years old, we're going to close the doors, retrofit another old automotive factory in a different state and bring all our shit to manufacture our cars there. Sooooo... we're going to need some money."

That's probably not going to fly.

The fact is, emotions are still running high over reopening economies across the nation. Tens of millions of Americans are still out of work. And the entire nation is still upset their favorite so-and-so is still closed.

As the country reopens –– and it will soon –– those emotions will be calmed down. Once they do, it's likely the actual financial costs of making wild decisions, like completely moving your company's headquarters and operations out of state, will be more considered.

The lawsuit will most likely be settled out of court with some undisclosed agreement –– 90% of them are. But I'd count on Tesla staying put in California.