Very few people would disagree that the future of personal transportation is the electric vehicle.

And in all likelihood they're absolutely right. Every major automaker is moving in that direction.

The transition from gasoline and diesel to electric vehicles is going to take much longer than Tesla or any of the Elon Musk fanboys are leading you on to believe.

If you believed all the hype surrounding EVs — and, yes, of course there is a degree of hype surrounding the industry — one day in the near future you'll wake up and every car on the road will be electric.

But let me tell you folks, it's not going to happen like that. And there's one very good reason...

EVs are simply less convenient than gasoline and diesel vehicles. And I don't know many people who are willing to give up convenience without a significant reduction in costs.

Before I go any further, I want to assure you that I am not saying there is no future for electric vehicles. Nor am I saying you should not be invested in the sector... you absolutely should be.

But without some kind of drastic change, the switch to EVs is going to take longer than most people expect. So you'd be wise to temper your expectations.

The median range for gasoline- or diesel-powered vehicles is over 400 miles and maxes out at about 700 miles. Of course, this has a lot to do with the size of fuel tanks and various other factors. A small vehicle like a Honda Civic holds about 12 or 13 gallons of fuel, while something like a Ford Super Duty pickup truck can hold about 50 gallons.

The husband and wife team of John and Helen Taylor, known as “the world’s most fuel efficient couple,” hold the world record for the longest distance traveled on a single tank of fuel. The couple drove 1,626 miles on a single 19.3-gallon tank of diesel in their stock 2012 Volkswagen Passat powered by a 2.0-liter TDI Clean Diesel inline four-cylinder engine with a six-speed manual transmission.

Meanwhile, the median range of a full electric vehicle right now is only about 115 miles and maxes out at around 375 miles.

Now, of course, EV ranges will increase in the future. The 2020 Tesla Roadster, which is scheduled to be released late this year or early next year, is promised to have a range up to 620 miles. But that's only a promise at this point. And, as Car and Driver Magazine points out, "certainly that number will be achievable only under very light use."

In other words, it's unlikely the 2020 Tesla Roadster will have an average range of +600 miles for most drivers.

But let's just assume for a moment that EVs will have comparable driving ranges to gasoline- and diesel-powered cars. Hell, let's even assume EVs will have significantly longer driving ranges than traditional combustion engines in the future. There's still other factors to consider. The big one: Charging times.

To fill up a gasoline- or diesel-powered vehicle takes about five minutes. The last time I filled up a vehicle with gas, it was finished in the time it took to walk into the station, buy a drink, and walk back to the car.

To recharge an EV can take days — depending on the model and where you charge it.

A Tesla Model S has a 100 kWh battery that can be charged at home or at one of Tesla's supercharging stations. If you're using a standard wall plug, you'll be using 120 volts. While this will get the job done, charging your Tesla Model S this way can take three days. Other EV models like the Nissan LEAF and Chevy Volt have significantly lower recharge times using a 120-volt plug. 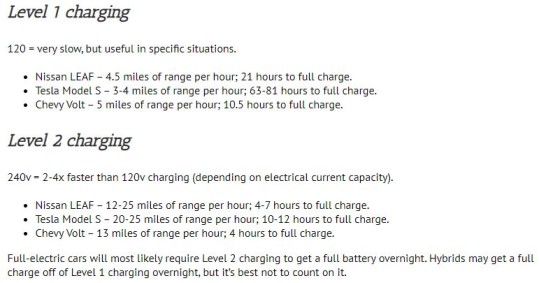 The fastest way to charge an EV right now is at one of Tesla's supercharging stations. Yet it still takes much longer than pumping gas.

To charge an EV at one of these supercharging stations just to 50% takes about 20 minutes. If you want a full charge, it takes about an hour and 15 minutes.

Well, in short, electric vehicles are simply less convenient than gasoline- or diesel-powered vehicles. And I don't know many people who are willing to give up convenience without a significant reduction in costs.

First, we absolutely know that oil is a finite resource. And while the world will never run out of oil exactly — that is, every oil well in the world won't run completely dry — sooner or later we will run out of cheap, easily accessible oil.

At that point, consumers will have to choose between paying through the nose for fuel or accepting a less convenient option.

It's also not out of the realm of possibility that governments around the world will simply outlaw gasoline and diesel vehicles. In fact, they've already begun down that road (pun intended). At that point, EVs will absolutely take over the market. But that doesn't change driving range or recharging time. It just forces the hand of the consumer.

I also have to mention that it's possible — albeit far less likely —  that we as a society may become willing to accept less convenience from our vehicles for environmental reasons. But, again, that's very unlikely.

Pose this hypothetical to even the most ardent environmentalist you know: You have the opportunity to clean up all pollution and completely restore the Earth to a pre-human condition. However, to do this you must personally live in a dirty, highly-polluted environment yourself for the rest of your life. Would you accept that deal?

Of course there are people who would say yes. But the majority are going to tell you to kick rocks.

Yet, as mentioned, despite electric vehicles being less convenient, there's still little doubt they are the future. They're just a future that consumers will be forced into one way or another. And that's why I say the transition from gasoline and diesel to electric vehicles is going to take much longer than Musk and his fanboys are leading you on to believe.

Yes, absolutely. But don't expect an overnight transition. Instead, expect a slow and steady switch.