This is an ominous chart. This is the Dow Jones Transportation Average. And it looks dangerous. 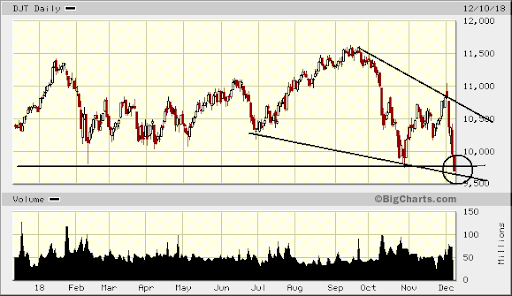 You see, when the transports and the Dow Jones Industrial Average agree, it gives us a clear sign of where the stock market is heading.

Here is the industrial chart: 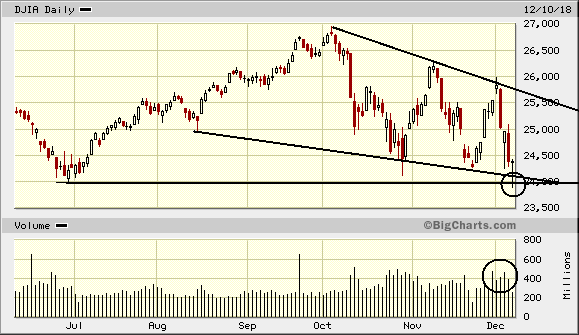 Both charts have broken their respective support lines. Both are in downtrends, with lower highs and lower lows.

I’ve been using the Dow theory for years. Back in 2013, I used it to confirm one of the biggest bull markets of all time, writing:

Back in May, I wrote in this space that the Dow Theory signaled a screaming buy on the Dow Industrials.

You can't argue with those returns.

If you've never heard about the Dow theory before, here's a little background...

The idea was dreamed up by Charles H. Dow in the late 1800s. Charles also happens to be the guy who founded the Dow Jones Industrial Average, as well as a small-town rag called the Wall Street Journal.

Furthermore, if the transports and the industrials confirm each other, then you have a trend, up or down.

If the transportation companies are lagging, it could foreshadow a fall in industrials. That's the logic, anyway.

As you can tell by the chart above, the transports just cracked. The industrials confirmed. The trend is bearish.

Most Decembers are relatively peaceful in the stock market. Investors lay on longs in retail; brokers try to push the market higher for year-end bonuses and sell their losers for the year due to tax loss deferments.

But this year it's different. Volatility is high, as everyone awaits the December 19th Federal Reserve meeting where the Fed will announce it is hiking rates another quarter-point.

The stock market is getting hammered due to a very real trade war with China and a global economic slowdown. Over half the world is in a bear market.

The Fed “made clear” in the minutes of the November meeting that it intends to raise interest rates in December. It’s backed itself into a corner.

If it doesn’t continue “gradual rate hikes,” the market will think the Fed has lost control and sell off even more.

You have eight days to protect yourself. Find out how. Click here now.