Writing about this topic is nerve-racking. It’s rare to encounter an event with the potential to bankrupt so many investors.

I’m typically focused on advice that will make our readers money. Offensive plays have been the go-to strategy during the past years’ bull market, especially in the energy sector.

Those days are over.

I’m sorry to be blunt, but we’re in damage-control mode now — even if most of the market hasn't realized it yet.

If you're heavily invested in energy stocks — which you should be, considering their stellar performance recently — you'll want to pay close attention. 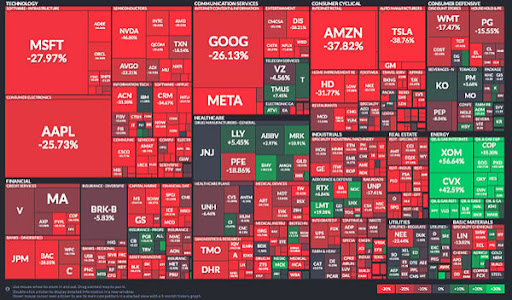 That tiny green oasis in a sea of angry red is the energy sector. A long summer of cabin-fevered American drivers guzzling $5-per-gallon gas and an impromptu reorganization of Russia’s vast oil supply pumped godlike sums of money into the pockets of the world’s largest energy companies.

For the last few months, the rising tide lifted almost every company in the sector. If you heeded our advice and dove into these stocks at the beginning of the summer, congratulations on your gains.

Unfortunately, it might be the last you'll see for the season…

This Is the Mother of All Bear Markets

The end of the summer season is always a tough time for the energy economy. It’s not exactly a big surprise. The demand destruction during autumn usually brings a predictable downturn in the oil market.

Of course, that was before President Biden declared war on his own country.

The president has made his hostility toward fossil fuels well-known. Like many of his political ilk, he tossed out an arbitrary date for a 100% transition to renewable energy. And just like the others, his efforts stopped there.

This increasingly popular “tough love” approach to energy is irresponsible to the point of negligence. We can ask Germany how its unflinching commitment to renewables is going as the nation scrambles to restart its mothballed coal plants. 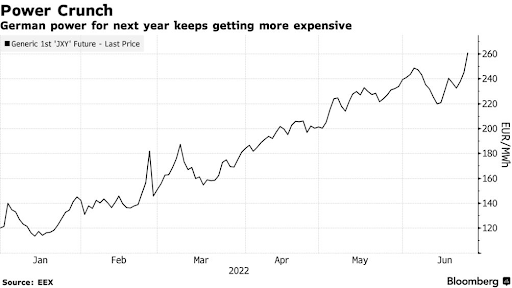 Don’t get me wrong, I love clean energy as much as the next guy. But entrusting it with the entire world’s power grid is kind of like throwing your kid in the deep end and watching them drown.

The presidentially sanctioned demand destruction we’re heading toward at the end of summer is going to be one for the record books. We’re seeing the telltale signs start to spring up like mushrooms.

Most importantly, Biden has committed to stifling the fossil fuel industry years before renewables are mature enough to fill the gap. After a certain point, the type of big-budget investment that keeps the energy sector thriving will dry up completely.

This summer’s driving season has also been like a drug for these oil companies. Americans’ driving habits, notoriously inelastic as they typically are, were almost unaffected by high gas prices — a big reason for those godlike profits that Exxon reported.

And to top it all off, we’re seeing a trend of refinery shutdowns that could lead to the death of American oil refining as we know it.

Since Biden’s administration began, refinery capacity in America decreased by nearly a million barrels per day. Even with gas prices soaring, no company is willing to invest in what Biden has declared a dying industry.

As an energy investor, those warning signs are more like blaring sirens. I can’t think of a more perfect recipe for an upcoming bear market.

That old defeatist attitude of cutting losses and giving in to the bear market doesn't jive well with me.

It’s difficult to come out on top when a once-profitable market comes crashing down around you, but it’s far from impossible. It just requires more patience and diligence.

In this particular market, the choice of company is everything. It can take years of planning and billions of dollars to start a new oil well or upgrade refinery capacity, so your pick better be able to handle whatever the future brings — or risk missing a fortune.

By that logic, the obvious pick would be a blue chip like Exxon, BP, or Chevron. If you’re looking to park your money in a stable dividend-payer, the option is always there. If you're lucky, you might outpace inflation by the end of the decade.

That’s not the bear market play we’re looking for.

I’m more interested in plays like this, with comparatively small-cap companies that have already proven their worth. They check all the boxes: high dividend, good financials, and the potential to post huge gains — even as the market plunges into the bear’s den.