Death of the Dollar

Written by Christian DeHaemer
Posted May 19, 2020

"You can't run from them, you can't cheat them, you can't sway them with excuses. If you owe them money and you don't want to crumble yourself, you pay it back." –– Tywin Lannister

The head of the Federal Reserve, Jerome Powell, was on 60 Minutes on Sunday. He was interviewed by the always solid Scott Pelley. After the usual blather about washing hands and opening the economy, there was this gem:

As a central bank, we have the ability to create money digitally. And we do that by buying Treasury Bills or bonds for other government guaranteed securities. And that actually increases the money supply. We also print actual currency and we distribute that through the Federal Reserve banks.

He has accomplished his goal.  Here is that idea in chart form: 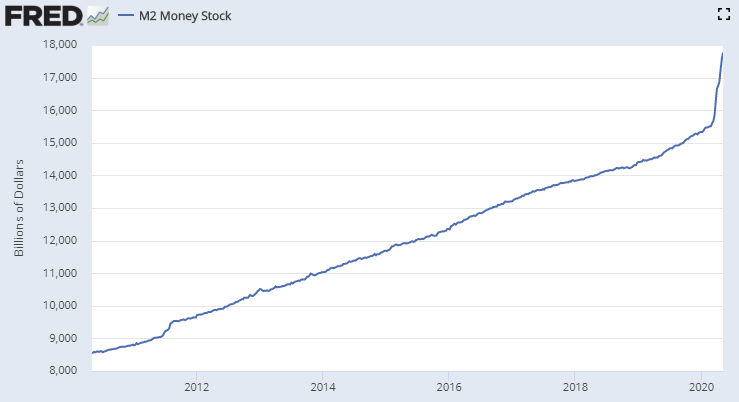 M2 is a measure of the money supply that includes cash, checking deposits, and easily convertible near money such as money market accounts. As you can see, M2 has launched. Whee free money!

The Printing Press of Happiness

Powell thinks he can print his way out of this economic collapse. As if creating wealth was as easy as adding zeros to the national debt.

He is wrong. History is clear about what happens when you debase the currency.

For example, Nero, the last of the Julio-Claudian dynasty of ancient Rome, was noted for debasing the denarius by reducing the metal content by 15%. He died by assisted suicide.

On the Road to Timbuktu

One of my favorite examples is Musa I of the Mali Empire, he was said to be the richest man, ever to live on earth. On a trip to Mecca, he gave away so much gold that he caused hyperinflation in the likes which had never been seen before or since. Musa made at least 71,000 pounds gold that was basically worthless, by just giving it away into societies that considered it scarce and valuable. It took three cities 10 years to rebalance.

Liberty, Equality and the Printing Press

And in France, after the revolution, the government needed money to finance its wars with Austria. So the French National Assembly printed paper money, which caused the prices of goods to grow so quickly that soon the ink necessary to print notes was worth more than the notes.

The examples are endless.  In more modern times you have the very real examples of  Zimbabwe, Argentina, and Venezuela.

The famous economist Milton Friedman wrote, "Inflation is always and everywhere a monetary phenomenon" in the sense that it is and can be produced, only by a more rapid increase in the quantity of money than in output.

Printing more money only means that each dollar is worth less than the one before it. The U.S. has gotten away with it for decades because it is the best of bad currencies –– much like the coinage of ancient Rome.

Besides it is not even working. The Fed wants to stimulate the economy. But money isn’t moving.

The velocity of M2 is at all-time lows:

The velocity of money is just what it sounds like. The more money that moves around the better the economy.  In strong economies people make and spend money. In weak economies, people don’t have jobs and start putting off purchases. You see, in the chart from around 1987 to 1997, people were making and spending money. After 2003 until 2007, the same thing –– times were good.

Powell is hitting CTRL+P as fast as his pasty white fingers can mash the button.

There are 12 zeros in a trillion. Powell has printed five or six of them. There is a bill in the house that wants to give away another $3 trillion. To put this in perspective, the IRS took in $3.46 trillion in taxes last year.

When asked about the growing debt, Powell said:

This is not the time to act on those concerns. This is the time to use the great fiscal power of the United States to, to do what we can to support the economy and try to get through this with as little damage to the longer-run productive capacity of the economy as possible.

The idea is that we will pay for the new money by growing the economy over the next few decades. This is complete bullshit. There are three ways to get out of national debt: pay it off, default, or inflate. And inflation is always the first option.

The point here, is that the Fed is printing money and prices are going up, the NASDAQ is up 3% for the year in the face of 36 million unemployed, and I just paid $17 a pound for a ribeye steak.

That’s how inflation works. You think you are rich until you notice it costs $2 million for a split-level home in a good school district, $100,000 for a new car, or $5,000 an ounce for gold.

There is no question that the U.S. dollar will lose value compared to things of worth. The $6 trillion question is what do you exchange your fading dollars for that will maintain its value over time?

This is the question we will try to answer here at Energy and Capital going forward.