Creative Destruction And The Financial Tech Revolution of the 21st Century

Joseph Alois Schumpeter was an Austrian political economist from the first half of last century. He managed to escape WWII and get U.S. citizenship in 1939. As a Harvard professor, he preached against Marxism and FDR’s New Deal and sponsored economists and others to get them out of Nazi Germany.

His most famous book called Capitalism, Socialism, and Democracy sits on my bookshelf, well thumbed, its cover torn. Much of the book compares and contrasts socialism and capitalism, which was the biggest economic argument of the time. Heck, we still argue about it despite the rusty remains of the Soviet Union smoldering in the background.

However, the idea that made Schumpeter famous was “creative destruction.” Joe was interested in the unexpected, rapid spurts of entrepreneur-driven growth that wasn’t represented in static models.

What if economic growth wasn’t driven by the slow, plodding increase in trade, offset by wars and plagues? What if prosperity was made with great innovations, lurching forward and destroying the status quo and replacing it with something better, faster, and cheaper?

There are plenty of examples. My childhood home movies, shot by my father, sit moldering in a box unwatched because they were shot on a Super 8 movie camera. My niece's movies are on Sony VHS, but my own children’s movies were shot on a Sony digital handheld camera. Now, of course, there are smartphones.

Kodak to Sony to Apple

In many ways, Sony (NYSE: SNE) was the Apple (NASDAQ: APPL) of its day, riding each wave of innovation until it peaked in 2000 with the rest of the tech sector. 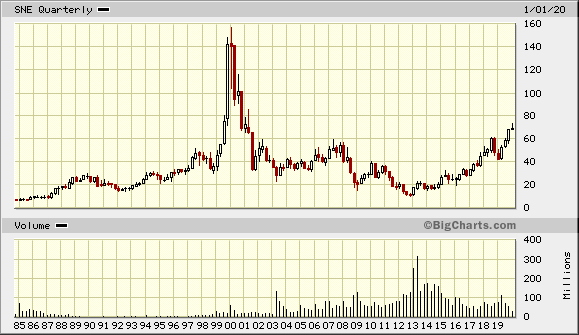 Sony can no longer produce a revolutionary product like the Walkman.

It could be because the risk/reward has changed. Japan went through a major currency/real estate crash in 1990. Instead of throwing out what wasn’t working and bringing in the new, Japan set about protecting the old order, the status quo.

Japan bailed out big banks, financial firms, and other powerful companies that otherwise would have gone bankrupt. These bailouts soaked up and destroyed the high Japanese personal savings rate. Due to fees and other measures, the bailouts came at the expense of Japanese savings.

Japan didn’t see a new bull market until 2013, or 24 years after it’s market top in 1989 and after it started printing money and buying stocks.

Printing money out of thin air pushes stocks higher, at least as long as the printing continues. Here is a great chart: the U.S. and Japan debt to GDP going back 150 years. 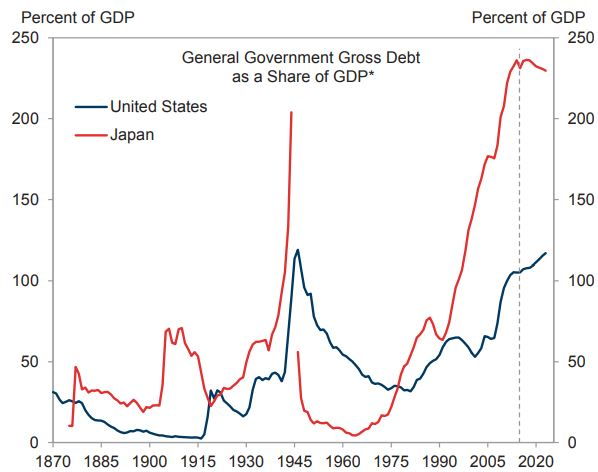 We Are Turning Japanese

Of course, after the 2008 banking crisis, which was a global crisis, every central bank started printing money. Many thousands of banks and companies that should have gone under were bailed out. Supporters of creative destruction urged governments to let those banks die. If they let them die, then new ones would take their place.

But they didn’t. Instead, savers and taxpayers have taken it on the chin. The criminals at the banks continue to get paid. CEOs get golden parachutes and ridiculous stock options all the while firing employees and screwing customers.

As I wrote last week, banks are stuck in their balance sheet mindset of mortgages, loans, and credit cards. They think that customers need them more than they do.

They don’t. Change is happening fast. Younger professionals care about other things like speed, ease, and low fees.

Companies that provide these innovations are seeing rapid expansion. Companies like Monzo, Revolut, and N26 are booming. One digital bank startup called Chime quadrupled in valuation to $5.8 billion in less than a year.

Just last month, Visa agreed to buy Plaid, a fintech company that connects users’ bank accounts to apps and services, for $5.3 billion. Find out how to invest in the new fintech revolution.