Few markets have been hit harder over the last couple years than cobalt.

The meteoric rise in cobalt prices that took place between 2016 and 2018 was followed by an incredible price collapse that cut 70% off its value.

It wasn’t hard to see why prices had skyrocketed suddenly...

Investors quickly caught on to how critical blue gold will be for us going forward — regardless of whether we live in a high OR low carbon future!

Robust projections were clear that demand for lithium-ion batteries would grow as more EVs hit the road. And it wasn’t long before more and more countries stated that they were banning traditional fossil-fueled vehicles.

But the good times didn’t last, as cobalt prices tumbled from record highs of nearly $45 per pound: 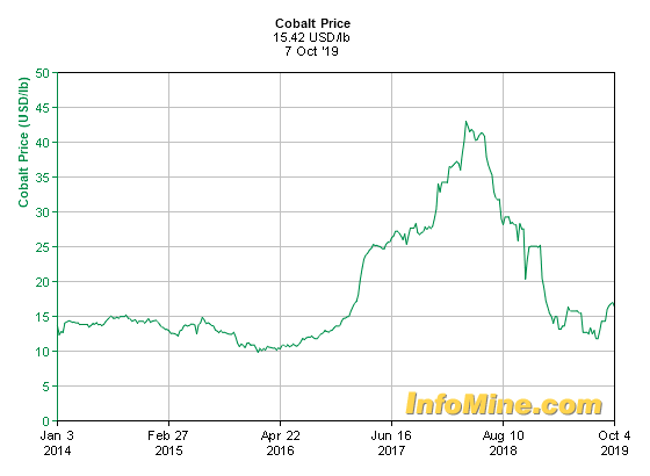 Like I said, few other markets have felt this kind of pain since 2018.

Over the last two years, cobalt prices fell to around $12 per pound in July of 2019.

Perhaps the biggest catalyst was triggered after the Democratic Republic of the Congo (DRC) boosted supply. If you recall, more than two-thirds of the world’s mined cobalt stems from the DRC. With strong EV projections being released, there was a veritable rush for miners to take advantage of high prices.

Unfortunately, this oversupply of cobalt doesn’t bode well for the near term, with a potential supply crunch not projected until as far out as 2023.

If nothing else, there are two bullish catalysts still open for cobalt investors.

The first is the obvious state of the DRC.

When 66% of the world’s mined cobalt is being extracted inside a country with a huge potential for geopolitical volatility, you can see how quickly a crisis could spring up.

In August of 2019, the world’s largest cobalt producer announced it was placing its Mutanda mine on care and maintenance due to weak prices.

To put a little perspective on this, keep in mind that Glencore’s Mutanda mine accounts for roughly 20% of global supply and is the world’s largest source for cobalt.

As you would expect, that has given cobalt investors a little bit of reprieve, with cobalt prices rising approximately 33% since the announced shutdown.

The second catalyst revolves around how quickly the world makes its transition to electric vehicles.

The longer your outlook, the bigger the profit windfall will be for cobalt.

Below, you can see that BloombergNEF’s latest Electric Vehicle Outlook 2019 projects that by 2040, 57% of all passenger vehicle sales will be electric: 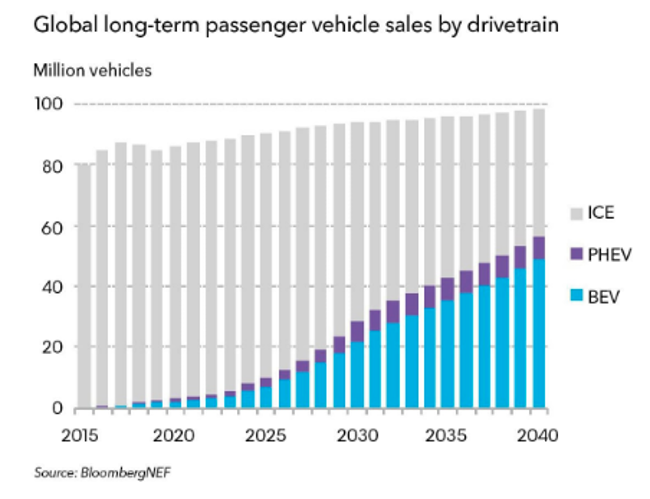 Although we’re not expecting to see in 2020 anywhere near the same kind of price explosion that we did between 2016 and 2018, the question now is whether or not investors are looking at the bottom.

If so, there’s only one place for the price to go from here.

Are you willing to bet on the DRC’s stability for the next decade?

You see, some of that supply increase out of the DRC was from artisanal mines.

Both of us know full well the tragic story behind production from these mines. We’ve talked before about the blood metal curse attached to cobalt; it wouldn’t take much for a public outcry at this outrage for big companies to avoid them.

Apple has already stated its goal to only use ethical cobalt.

Where does this leave investors?

The true winners in the cobalt market will be long-term investors that capitalize on the current price conditions.

Another potentially bigger winner in the cobalt space could be right here in North America. As you know, the United States relies heavily on foreign imports to meet its current need for cobalt.

In fact, the Department of the Interior published a list of 35 mineral commodities in 2018 that it deemed critical to the economic and national security of the U.S.

Now consider that we import roughly 75% of our cobalt, most of which comes directly from China.

This has spurred the government into action, with President Trump announcing this past June that his administration will accelerate the development of projects on federal lands targeting these critical minerals.

You're going to want to keep an eye on this one.