Coal Is Not Dead

They say coal is dead.

And, to some degree, they're right.

The use of coal for energy generation here in the United States, for example, has ostensibly peaked.

According to the U.S. Energy Information Administration (EIA), coal consumption in America hit a 40-year low in 2019. 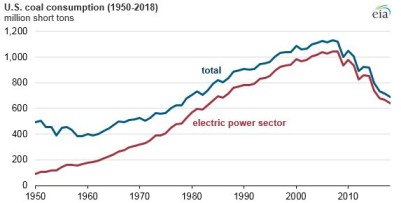 So, in the United States at least, coal is probably dead.

But here's the thing: There are 194 other countries around the world where the other 95% of the human population live.

As much as your politicians want you to believe it, America is not the center of the universe. The United States is absolutely a global financial powerhouse; but it's not the only game in town. And around the rest of the world, we see steady coal demand over the next few decades.

In its December report simply titled Coal 2019, the International Energy Agency (IEA) says global coal use has never been higher, accounting for about 40% of electricity generation and touching all time highs last year. The IEA reports:

Global coal demand increased by 1.1%, continuing the rebound that began in 2017 after three years of decline. The main driver was coal power generation, which rose almost 2% in 2018 to reach an all-time high. Coal maintained its position as the largest source of electricity in the world with a 38% share. The People’s Republic of China, India and other Asian economies led the expansion, while coal power generation fell in Europe and North America. In non-power sectors, despite a lot of coal-to-gas switching in China, demand remained stable. The international coal trade grew by 4% in 2018, surpassing 1.4 billion tonnes.

At the end of the day, the IEA forecasts global coal power generation will increase by 4.6% per year through 2024 and remain stable through at least 2040.

So coal's not dead, especially in China and Southeast Asia.

This is the point at which I expect a lot of push back from climate change fanatics using words like “should” and “need.” But we're not worried about what needs to be or what should be — only what is. And what is: Global coal power generation is expected to increase by 4.6% per year through 2024 and remain stable through at least 2040.

And that's why energy investors like Christian DeHaemer, investment director of Bull and Bust Report, are still champing at the bit to get a piece of China's coal market. DeHaemer says:

We've got China on this one. It will need to continue purchasing millions of tons of coal from the United States — trade war or not. The coal industry is suffering from public image. It's dirty. It's ugly. But the reality is China absolutely still needs coal to keep the lights on. As a result, the coal market will remain healthy in the near term.

There's a true growth trend in coal right now, which might make it one of the most undervalued commodities in the world. And there's a solid case to be made that coal isn't dead but, instead, will be a top-performing asset over the next 10 years.