My readers know by now that I'm about as bullish on oil as you can get, especially as we begin to move away from this cyclical bottom.

And as strongly as I believe oil prices will rebound, I believe coal demand will not... that is, barring some miracle technological breakthrough.

Don't get me wrong; coal is still among the cheapest sources of energy in the world. And we are nowhere near the end of our coal supply. Though it has to happen some day, that day probably isn't anytime soon.

I'm saying no one wants it.

Before you start listing all the countries that still rely on majority coal energy — I live in one of them myself, for the record — hear me out.

There is a global exodus happening in the coal industry. The boom in renewable energies, concern for the environment, and changes to energy infrastructures are making even cheap, abundant coal less economical than ever.

Let me explain in a little more detail... 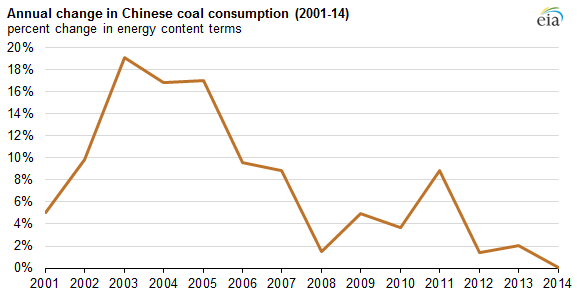 Have you seen this chart yet? It's from the Energy Information Administration, and it shows the changes in coal use from the world's largest energy importer.

Understand, no one is saying that coal use in China is dwindling — only that the growth of coal use is slowing. In fact, it was practically flat in 2014.

This is in large part due to the country's increasingly desperate need to cut coal emissions. The country has in recent years set stringent regulations on coal use.

Last year, China published its Energy Development Strategy Action Plan (2014-2020). The plan gives guidelines to reduce coal's part in the country's energy portfolio from its 2012 level of 66% down to 62% by 2020. There will also be a cap on total annual coal use at 4.2 billion tonnes until 2020.

This takes into account the growth of energy demand in that time, which means if demand grows more than 3.5% per year till 2020, other energy sources will have to cover the excess.

For a slightly more enlightening visual of this trend, check out this interesting little chart of global coal consumption between 1980 and 2010:

You can see how Asia's coal use grew dramatically during this period, whereas the rest of the world's use either decreased or stayed flat. Unfortunately for coal, that means its best source of growth may not be its biggest supporter anymore.

As the largest energy importer, producer, and consumer, China is the most imposing example of coal's downward trend.

And this isn't the only example — not by a long shot.

India and Japan are the largest importers of coal after China, and both are shifting their focus to other energy sources.

India, unlike China, isn't looking to cut its coal use. In fact, it's planning to ramp up its domestic coal production in coming years. Its position as a net importer of coal, often expensive coal from Australia, is costing the country too much.

However, renewable sources are moving in on this market, too. Rather than spend money to expand the fossil fuel electricity grids across the country to the 45% of homes that aren't connected, it may make more sense for India to install solar micro-grids to power remote areas.

Meanwhile, Japan has restarted some of its nuclear capacity. Having upgraded many of its nuclear reactors after the 2011 Fukushima disaster, the country's energy portfolio is expected to reduce fossil fuel power from its current level of 88% to between 55% and 58% by 2030.

And of course, there's my coal-consuming country, the U.S., entering into the Clean Power Plan. Already there are new regulations in effect on the emissions levels and cleaning processes for coal power plants, with more new rules expected from the Environmental Protection Agency soon.

Many of the country's biggest coal companies have either closed in recent years or gone into bankruptcy.

And let's not forget April 2015, the month natural gas surpassed coal as the country's largest source of energy. It didn't last, but it's a clear sign of what's coming.

So what does this mean for the future of the market?

Coal isn't dead just yet. Although it's expected to be a major part of the global energy portfolio for quite a while, continued use does not always equal continued growth.

And as I've said before, zeitgeist can be a powerful force. As cheaper natural gas power bridges the transition to renewables and renewable technologies become more affordable and more available, it's likely coal will not be able to recover any losses it will suffer at the hands of popular opinion.

Any major drops in the price of solar, wind, or hydropower will make them all the more valuable to countries looking to step away from emissions-heavy energy.

There may yet be a way to slow coal's drop from the world's energy production. I've recently come across one company that has the potential to turn the coal industry around.

I plan on giving you the full details behind this brilliant technology in the coming weeks, so stay tuned.