CHIPS for All: Where Are Biden’s Billions Going?

Last Thursday, in a stunning moment of bipartisan cooperation, the highly anticipated CHIPS and Science Act cleared the Senate with a vote of 64-33. America’s struggling semiconductor industry has finally been granted some much-needed breathing room.

Executives from chipmaking giants like Taiwan Semiconductor Manufacturing (TSMC) and Intel could hardly contain their childlike excitement as the decision was announced.

And who can blame them? I’d be grinning like an idiot too if I were on the short list for a massive $52 billion payout.

In fact, given the amount of support we’ve seen recently for domestic chipmaking, every semiconductor company in the U.S. has reason to celebrate. President Biden has officially singled out computer chips as the United States’ path back to manufacturing supremacy.

Back in the 1990s, the U.S. manufactured close to 40% of the world’s chips. Today, that number is barely over 10%. A small handful of companies currently manufacture just about every piece of silicon on Earth.

TSMC, the world’s undisputed leader, produces an incredible 56% of the total market. That’s one of the biggest economic red flags I can imagine — especially given the political landscape these past few years. 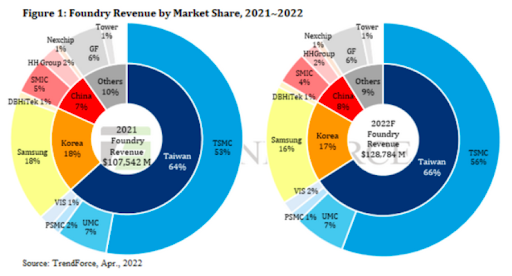 Russia recently punished the world for depending too heavily on unstable foreign energy. And China has been consistently showing us the danger of outsourcing manufacturing for decades now.

Now that Taiwan — home of half the planet’s fabrication capacity and the vast majority of our chipmaking expertise — is in increasing danger of becoming China’s newest prize, this funding can’t come soon enough.

Analysts are calling this bill the biggest update to U.S. industrial policy in half a century. It’s a huge boon for some of the most critical yet neglected domestic industries.

So far, we’ve seen some of the bill's critics complain that only large-scale corporations will benefit. That couldn't be further from the truth.

Here’s a direct screenshot from the official White House website: 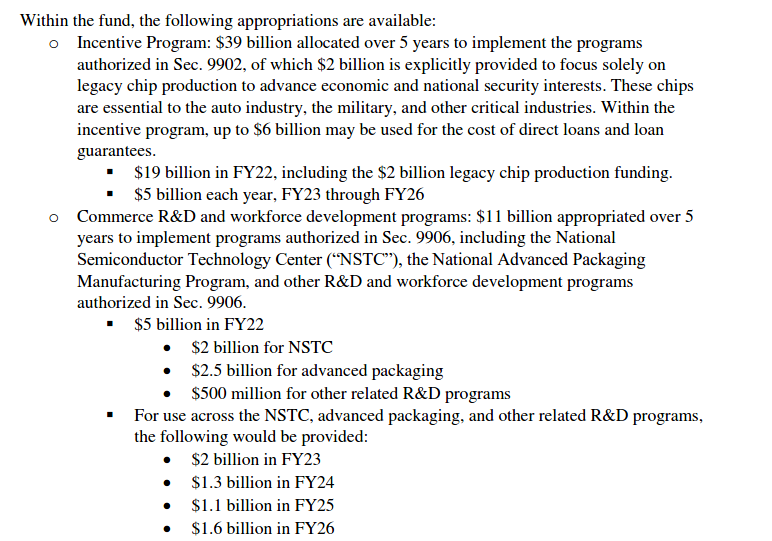 Most of the funding for R&D is in the form of incentives rather than a free-for-all giveaway. That means if a company applies for funding to train new staff, dive into advanced fabrication techniques, or even start up a new semiconductor division, the money is there.

The bill has $2.5 billion earmarked for advanced packaging, the technology that TSMC used to create Apple’s revolutionary M1 chip.

Another $200 million will specifically fund workforce programs to train a new generation of American chipmakers.

According to Jesus del Alamo, an MIT professor who specializes in advanced semiconductor designs, the real victor will have to succeed on merit alone.

“In this game, the winner takes all,” he says. “Whoever comes out with the next most-advanced technology first takes a disproportionate amount of the profits, and that company can then invest a lot of money in R&D to keep on the leading edge.”

There are plenty of small-cap companies with the technical know-how to compete with larger companies like Intel and IBM. They just require a little more digging to find.

You Should Invest in This Company YESTERDAY

Biden is trying his best to claw back some of America’s long-lost manufacturing superiority. Say what you want about the guy, but this is a smart move.

The global chip shortage has eased slightly, but it exposed a gaping hole in U.S. economic security. Depending on a critical resource like semiconductors is no less dangerous than fueling an entire continent with Russian oil.

Biden’s billion-dollar investment reflects that. This funding is as much a national security measure as it is an economic stimulus.

Call it what you want, but it’s still a major bonus for the industry — even more so for this small team of researchers.

Out of every semiconductor company in America (believe me, we checked all of them), this team is hands down the most likely to get a once-in-a-lifetime cash infusion.

It’s not one of the giants like Intel, NVIDIA, or Texas Instruments. They're the low-hanging fruit.

Those bigger guys will most likely get their share of funding, but it won’t have nearly the same influence on stock prices.

A company this small but with this much potential is the type of investment that can net investors quadruple-digit gains. Once Biden’s checks clear, expect share prices to soar almost overnight.

The bill hasn't officially been signed yet so there’s still time to get in early. But first, you'll need this quick, comprehensive investment guide. There are a few key shortcuts that cut out any unnecessary headaches.