ENN hopes to build about 50 stations over 2013, and this project would follow an approach adopted by companies like Royal Dutch Shell Plc (NYSE: RDS.A) and Clean Energy Fuels Corp. (NASDAQ: CLNE), both of which are also very invested in developing a widespread fueling network for natural gas-driven heavy vehicles, as Reuters reports.

There have been several notable Chinese deals with American shale gas entities recently, like Sinopec Group's purchase of oil and gas assets along the Mississippi Lime shale. 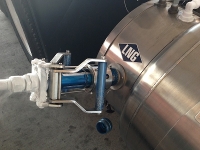 In the U.S., the ongoing glut of natural gas production has stimulated a major shift on the part of trucking fleets and other companies, who are investigating the pros and cons of transitioning to natural gas as a fuel, attracted by its rock-bottom prices. Shippers stand to save nearly $2/gallon by abandoning diesel in favor of natural gas, as Reuters reports.

ENN isn’t wholly new to the U.S. natural gas game. Two years back, the company attempted a partnership with Clean Energy that fell through. Then, ENN reached out to CH4 Energy of Utah and jointly developed a natural gas station in Salt Lake City. The joint venture was called Transfuels LLC, and it operates as Blu LNG.

Clean Energy today has about 70 LNG stations, and Shell intends to build close to 100 on its own. Blu’s larger plan is for 500 stations across the U.S., but it hopes to start out with 50, Reuters says.

Unlike Clean Energy, which has its stations situated along routes operated by Pilot Flying J, and Shell, which is working with TravelCenters of America LLC (NYSE: TA), Blu does not have any ongoing negotiations with a particular truck stop. Blu does, however, have some green energy projects on paper partnered with Duke Energy Corp. (NYSE: DUK); none have yet been implemented. And Blu also has a $5 billion solar facility and manufacturing plant in development over in Nevada.

The trucking industry may well be the linchpin for introducing natural gas as a fuel to U.S. roads at large. With all these companies vying with each other to set up natural gas refueling stations, quite a large part of the U.S. trucking sector will soon be relying more on natural gas and less on conventional fuel.

It is estimated, the International Business Times says, that ENN’s deal with CH4 is roughly worth $50 million, which is fairly small for such joint ventures. However, ENN is a major player in the Chinese market.

Over there, ENN has already successfully developed more than 200 LNG refueling stations across the country, the IB Times reports. Back in February, ENN also signed up with Canada’s Westport Innovations Inc. to go global with its clean fuel engines. Westport (NASDAQ: WPRT) manufactures engines that utilize natural gas.

China’s interest in the U.S. natural gas sector has risen by leaps and bounds over the past few years. From less than $1 billion back in 2008, foreign direct investment has gone up to $6.5 billion in 2012. It is widely expected that that record will be exceeded by the end of 2013.

“There are billions and billions of dollars to come,” Thilo Hanemann, a China analyst for New York-based research firm Rhodium Group, told the Washington Post earlier this year after publishing a report saying that Chinese FDI in the U.S. this year will break 2012’s record. China’s Ministry of Commerce said in December that the country's total accumulated FDI in the U.S. stood at $10.1 billion.

However, the U.S. has forced China into maintaining a relatively low profile despite its clearly rising interests. Last year, Congress pushed the U.S. administration to block mergers from Chinese companies Huawei and ZTE Corp. based on concerns that they would make electronic espionage easier for Chinese intelligence officials, as the IB Times reports. The two companies are China’s largest phone equipment manufacturers.