China is Winning the Real Trade War... for Now

Don’t feel too bad; you’re not the only one who’s been distracted by a news cycle that is measured in minutes.

Between the tweets, the protests, and biting your fingernails on which direction the market is going to go today...

What everyone missed was a fly-by-night order that Trump hurriedly signed on December 20, 2017.

And it was buried under the fiery rhetoric raging on both sides of Capitol Hill.

So what was so important that the president rushed to sign?

It can also make you filthy rich... but we’ll get to that part a little later.

First, let’s take a look at why Executive Order 13817 is so critical to both our futures and the future of the United States.

Back in 2009, China commanded roughly 95% of the global market for rare earths.

What’s worse is that the Chinese know they have this commodity market cornered.

If I rattled off the list to you, there’s a good chance you will have never heard of them before. But to be fair, I’m almost positive that I wouldn’t be able to correctly pronounce several of them.

Praseodymium, yttrium, gadolinium... let’s see how you do with ‘em.

Yet these rare earths are so essential to some technologies that it’s not hyperbole to suggest they’re absolutely indispensable to certain up-and-coming markets.

Make no mistake, dear reader: China has one helluva monopoly on them.

And now history is repeating itself as China makes its move to corner another market, one that is arguably the most important strategic mineral in the EV revolution: cobalt.

GEM, one of the largest sources for materials for Chinese battery companies, inked a massive deal with Glencore for more than 50,000 tonnes of cobalt over the next three years.

Before you ask, the answer is no, China doesn’t care about the horrific working conditions that have been reported in the Democratic Republic of the Congo.

Nothing matters so long as those cobalt shipments are made on time.

To put a little perspective on the immensity of this deal, that’s about half of all the cobalt that was produced on the planet in 2017 and amounts to one-third of Glencore’s production between 2018 and 2020.

If that doesn’t send a chill up your spine, think of what Elon Musk and Tim Cook feel like now that they’re scrambling to secure their own respective cobalt resources.

Now just imagine what would happen if the current trade war extends into this realm.

The Secret Behind Trump’s Order 13817

One of the United States’ greatest weaknesses today is its glaring reliance on these strategic minerals.

Think of it like our dependence on OPEC oil before shale boom.

Or perhaps you’ve forgotten the fact that in August of 2008, we were importing more than 5.8 million barrels of crude oil from OPEC on a daily basis.

Now, I want you to picture how bad the situation would’ve been if the U.S. barely produced any crude oil at all.

Not too pretty, huh?

This is the state we find ourselves in when it comes to our strategic minerals.

When the U.S. Department of the Interior and the USGS released a summary of mineral commodities within the United States, the findings were staggering. 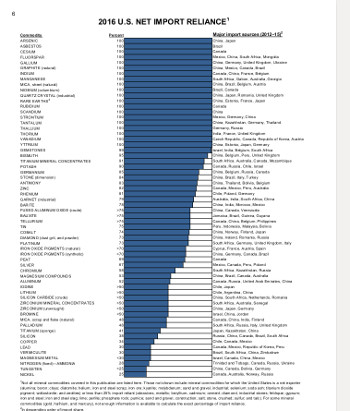 Above is a list of our reliance on foreign sources for raw and processed mineral materials.

A few things probably stand out, like the fact that we are 100% dependent on other countries for 20 of our strategic minerals.

Moreover, imports accounted for one-half of the U.S. consumption of 50 non-fuel mineral commodities.

And if you think that’s scary, keep in mind that we rely on China for more than half of our net imports for 19–28 of those commodities.

When — and I do mean when — China decides to go for the throat, it won’t be with U.S. soybeans.

Yet this is where that little-known Executive Order 13817 comes into play.

The order essentially calls for the U.S. to develop a federal strategy to ensure secure and reliable supplies of critical metals.

If you want to know which ones, just take another glance at the list above.

This bill has one clear objective: to boost U.S. production of these strategic minerals.