China Could Shut Down the U.S. Military Without Firing a Shot

“We advise the U.S. side not to underestimate the Chinese side’s ability to safeguard its development rights and interests. Don’t say we didn’t warn you.”

That was a chilling message from the Chinese government sent to the U.S. in May 2019. At the time, we had no idea how serious this threat was.

Chinese President Xi Jinping and U.S. President Trump had been locked in a years-long trade squabble that ended with mixed results.

The U.S. leader’s slew of tariffs were intended to stop China from wantonly ripping off U.S. intellectual property en masse — a worthy cause, if you ask me.

In the end, the policy cost the U.S. economy billions of dollars and somewhere near 250,000 jobs. You can’t win 'em all.

If only all the leaders’ exchanges could have been as funny as when Trump awkwardly imitated Jinping’s accent at a national address. 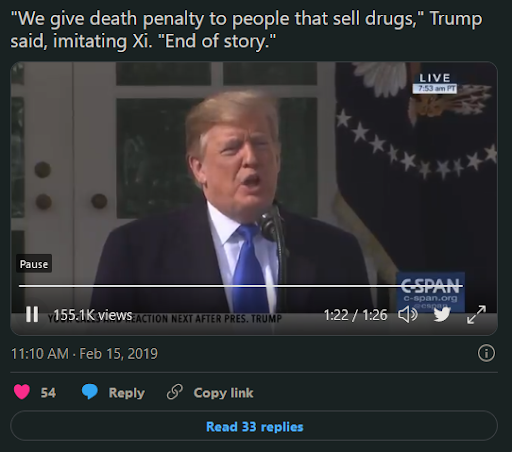 Instead, tensions rose dangerously close to a full-scale conflict.

China started issuing threats that made the Defense Department’s hair stand on end.

It spooked defense contractors badly enough for them to push for major government intervention.

China has spent decades locking down a vast collection of supply monopolies, many of which present serious national security risks.

This isn't the same as China controlling the supply chain for smartphones or cheap plastic toys.

It’s much bigger than that.

Right now, China controls more than 90% of the planet’s supply of what can safely be called the most important minerals ever discovered.

From the way I describe them, you’d think these strange metals were the cure to cancer AND the solution to perpetual energy.

But in a way, they're even more important.

They're what I’ve been referring to as “Imperial Metals,” because whichever nation controls them has real potential to gain total military superiority over the planet.

The U.S. typically can’t be questioned in terms of military dominance. But every single one of our big guns, from railguns to nukes and everything in between, relies on these "Imperial Metals."

Optics are useless without them. Computer guidance systems, night-vision headsets, and even stealth technology would all be converted into expensive doorstops.

That’s why the Defense Department is in such a state over this. We rely almost 100% on China to sell us the materials that help keep us safe from… China?

I’m sure everyone else here notices the conflict of interest. It’s like Russia’s oil and gas conundrum all over again.

The choices are to either continue buying China’s well-priced "Imperial Metals," or spend untold billions to establish another supply chain — probably for double the cost per ton.

It’s a tough call, but the consequences of inaction are on display for the world to see right now. Half of Europe will be left in the cold this winter.

Expensive energy is a crisis, to be sure, but it pales in comparison to an "Imperial Metals" crunch.

Imagine if China launched an attack, only for our military to realize our defense systems are short on parts?

I doubt Russia’s ability to lead a planet-wide takeover. But China, on the other hand….

We’re Safe for Now, Thanks to Our Fearless Leader

In yet another moment of uncharacteristic shrewdness, Biden is actually taking a step to defuse this powder keg before it ignites.

In his recent funding bonanza, Biden allocated close to half a trillion dollars toward shoring up our economy against a Chinese "Imperial Metals" crunch.

To put that into perspective, America’s own industry is practically nonexistent.

China pumps out 168,000 metric tons of refined metal per year, while the U.S. barely musters 48,000 tons of unprocessed ore from its single active mine.

Hundreds of billions of dollars being pumped into an industry this small is a surefire way to watch stocks soar. It’s a moment we’ve been waiting for since China first flexed its "Imperial Metals" muscle.

I don't know about you, but we’re buying into this upcoming trend ASAP.

The industry itself is tiny, so it doesn't leave much room for guesswork. Only a handful of companies are on the shortlist to get this massive handout.

Based on our calculations, these plays are small enough to see triple- or even quadruple-digit gains once the money is handed out.

That’s all I can say here. Read more at our secure research portal to see inside details, financial analysis, and specific buy/sell targets for the industry’s most promising stocks.