The Future of Cancer Treatment

I was exposed to death at an incredibly young age when someone whom I held very dear passed away...

Until the age of five, a large portion of my upbringing was spent with my great-grandmother or, as I knew her, "Nanny."

One evening, my mother told me that Nanny would be going to sleep for a very long time. And while I was young, I knew exactly what that meant. I cried that night more than I ever have in my entire life. I spoke with my mother about death, and I told her I wanted to be with Nanny in heaven.

This worried my parents so much that they decided to put me in a bereavement group (which led me to unrealistically send letters to heaven via balloon transport). This bereavement group catered to children who had lost family to cancer.

While my own loss was difficult, I actually left that program feeling a strong sense of privilege. You see, many of those children had lost their parents, and I personally cannot fathom what kind of toll that would take on a child.

Cancer is an absolutely devastating illness. I realize you didn't need to hear my story to know that.

And while you should never let emotions guide an investment decision, there can be an added bonus to putting your money somewhere that can make a difference, especially to you personally.

The play I am going to share with you today definitely provides a little icing on the cake.

This is a backdoor opportunity to what has been labeled the "future of cancer treatment" — and it just might be one of my favorite picks right now.

Mevion Medical Systems is a medical device company that was founded in 2004.

In the second quarter of 2013, Mevion raised $55 million in venture capital, making it the second most highly funded private health care company during that period.

The $55 million raised by Mevion will help the company move forward with its patented S250 Proton Therapy System.

The National Comprehensive Cancer Network (NCCN) has labeled proton therapy "The Cancer Treatment of the Future."

The only recognized downside is that the technology has traditionally been far more expensive than conventional therapies...

The S250 will cost hospitals about $30 million. While that seems like a hefty price tag, you should know this is actually a staggering 70% price cut from the next cheapest proton system.

Furthermore, the S250 dramatically cuts down on required space. While other proton therapy systems require as much space as a football field, the S250 fits in a 30ft. by 30ft. area.

In combination with the system's massively reduced cost, this allows proton therapy to be far more accessible to hospitals.

That's why the S250 is already in high demand, with $100 million in current unit orders.

Mevion will be installing more than a dozen systems worldwide within the next two years, making it a new leader in proton therapy.

In order to produce the S250, Mevion has awarded a five-year $115 million contract to Ranor Inc., which will work with Mevion as an exclusive components manufacturing partner.

To get an idea of how substantial these components are, take a look at the giant hunk of metal below: 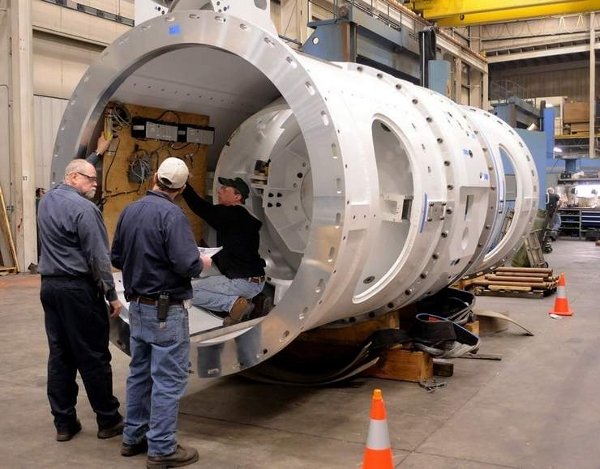 Here's where our play comes in...

Ranor Inc. is owned by TechPrecision Corporation (OTC: TPCS), which is currently trading at just $0.35 a share.

TechPrecision was trading around $1.50, but the share price dipped when the company recently announced that it requires an amendment with its credit facility.

However, with future installations of the S250 on the way, these financial worries are largely exaggerated. It is very unlikely the company will enter bankruptcy.

Not only does the recent FDA approval for the S250 offer the promise of future revenue growth, but it also establishes a financial safety net...

It is in Mevion's best interest to provide TechPrecision with short-term operational funding. TechPrecision is providing a precise and customized component for the S250, and Mevion simply cannot produce the revolutionary product without it.

Within the next five years, the number of proton therapy centers in the United States alone is expected to triple — from 10 facilities to 30 facilities, according to the NCCN.

With the most accessible proton therapy system in the market, Mevion is set to dominate.

For those of us willing to take the risk, the opportunity here is absolutely massive.