“When one job gets filled, another one-and-a-half opens up..."

Last week, Harry Smith and the crew of NBC's new show "Rock Center" traveled to North Dakota to get a firsthand look at the American employment craze in Williston, the epic center of the Bakken oil boom.

If you missed it, you can watch it here. But before you do, hear me out...

Visit msnbc.com for breaking news, world news, and news about the economy

Back on October 25, I laid out my plan to get millions of unemployed Americans back to work.

It’s very simple: Open up our resource-rich oil and gas shale regions to exploration and production.

In the Bakken, 18,000 jobs are unfilled. This figure is only going to grow.

You see, right now there are more than 3,000 wells that have been or are being drilled in North Dakota.

I’ve owned and visited oil and gas drills in the past. Typically, 10 to 12 men are needed to run the drill.

North Dakota will be an employment bonanza.

The momentum in the Bakken is accelerating... 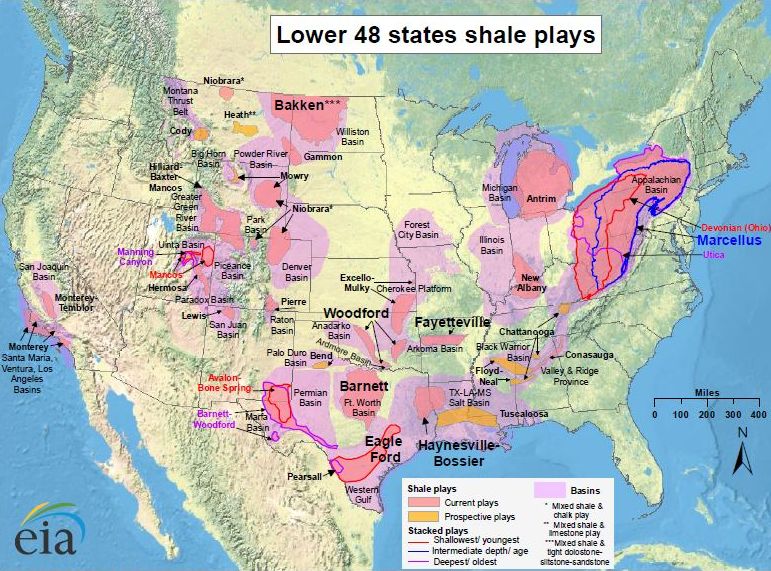 But the Bakken is just one of many shale formations we can tap into.

Take a look at this “Shale Boom USA” chart (right).

A recent report by Bloomberg quotes New York Commissioner of Environmental Conservation Joe Martens that the Marcellus could add more than 13,000 jobs — direct and indirect to his state.

“That’s our most conservative estimate. The higher estimate is nearly 54,000 jobs,” Martens said.

Then we have what’s happening in Youngstown, Ohio...

Once an economic powerhouse, Youngstown has experienced persistent unemployment for decades as the steel industry declined.

But now, according to the Wall Street Journal: “On the edge of the Mahoning River in Youngstown, more than 400 workers are constructing what long has been considered unthinkable: a new $650 million steel plant. When complete, it will stand 10 stories tall, occupy one million square feet and make a half million tons of seamless steel tubes used in 'fracking' or drilling for natural gas in shale basins.”

And it’s not only right-leaning media outlets that are promoting the benefits of our shale resource. Last Friday, the liberal New York Times had this to say:

The U.S. now seems to possess a 100-year supply of natural gas, which is the cleanest of the fossil fuels. This cleaner, cheaper energy source is already replacing dirtier coal-fired plants. It could serve as the ideal bridge, Amy Jaffe of Rice University says, until renewable sources like wind and solar mature.

Already shale gas has produced more than half a million new jobs, not only in traditional areas like Texas but also in economically wounded places like western Pennsylvania and, soon, Ohio. If current trends continue, there are hundreds of thousands of new jobs to come.

And Halliburton and Schlumberger reported this over the summer:

HAL and SLB may have the power to charge higher prices for their oilfield services through 2012 thanks to a backlog of unfinished oil and natural gas wells that tripled in the past year.

The number of onshore wells in the U.S. and Canada waiting in line for the workers and equipment needed to complete them for production has risen to 3,500 from 1,145 in the second quarter 2010, according to a Halliburton count. Producers are seeing delays as long as six months.

All of this means a long, sustained bull market in oil and gas stocks as we ship our natural gas to Asian markets.

I mean, think about it... Inside of four years, shale gas has catapulted the U.S. from ninth to first in global natural gas production.

This is a long-term trend. And we'll continue to make a fortune.

As Obama fights with Congress over his jobs bill, the oil and gas industry isn’t waiting for Washington to figure it out.

As you can see by this chart, O&G is booming while many unemployed Americans wait for Washington to decide their fate. 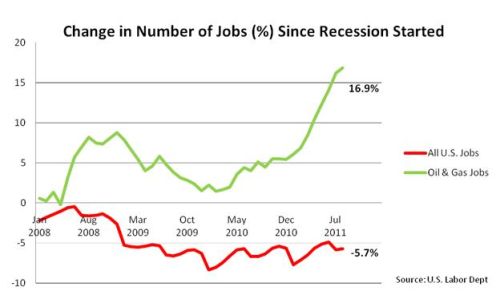 And take a look at this "jobs map": 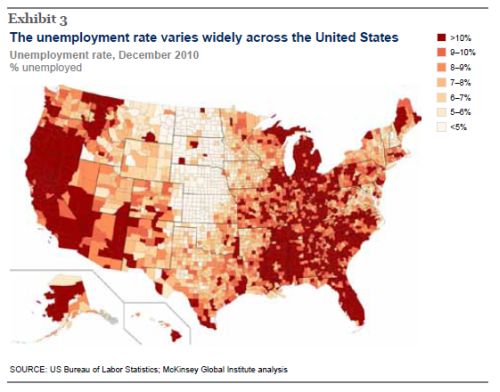 As you can see, somebody is doing something right.

This is the heart of the matter. It’s not a coincidence that the states with high environmental regulations and a general disdain for oil and gas also have the highest unemployment.

Look, it's not that the jobs aren't out there.

They are — including over 18,000 unfilled jobs in the Bakken alone... more than enough for every protester at Occupy Wall Street.

Nobody said life's fair. And I hate to break it to them, but to get by, you actually have to work.

You want to see a boom? Unleash American ingenuity.

P.S. I’m so serious about this issue that I’ve decided to take a road trip to America’s great shale formations. We will visit the boom areas, meet with CEOs, and hopefully bring back some great investment ideas for you. Being that our offices are in Baltimore, we’ll start here in the Marcellus in Western Pennsylvania, New York, and Ohio... then we’ll head west to the Bakken. Stay tuned for our boots-on-the-ground reporting — and how to invest accordingly.