The Truth About Pot Stocks

Last week, Politico published a story about how Canadians who work in the cannabis industry, as well as those who invest in it, risk a lifetime ban on travel to the United States.

The warning came from a senior official overseeing US border operations. I suspect this warning came from some higher ups over at the DOJ or someone in the White House that may be using this as leverage in trade talks.

The truth is, this policy has really always been in place because cannabis is still considered a banned substance in the eyes of the Fed. Technically, those who work in the cannabis industry can be considered drug traffickers. Of course, I suspect most border agents aren’t going to go out their way to enforce this, as such a thing really isn’t worth their time. I’m quite certain that catching terrorists is further up on their “to-do” lists compared to busting cannabis execs traveling to the US to speak at conferences or meet with investors.

Still, the warning did spook a lot of folks. Especially investors who were told that the recent sell-off in cannabis stocks was the result of that warning.

Of course, the idea that the entire sector sold off because of the announcement from the US Customs and Border Protection Agency is absurd. Let's face it: Anyone who’s been following this industry for more than a few weeks knows that a sell-off was long overdue, as nearly every cannabis stock in the market has been, and continues to be insanely overvalued. Hell, just look at Tilray (NASDAQ: TLRY), for instance. This one took off like a bat out of hell after going public less than three months ago. Take a look … 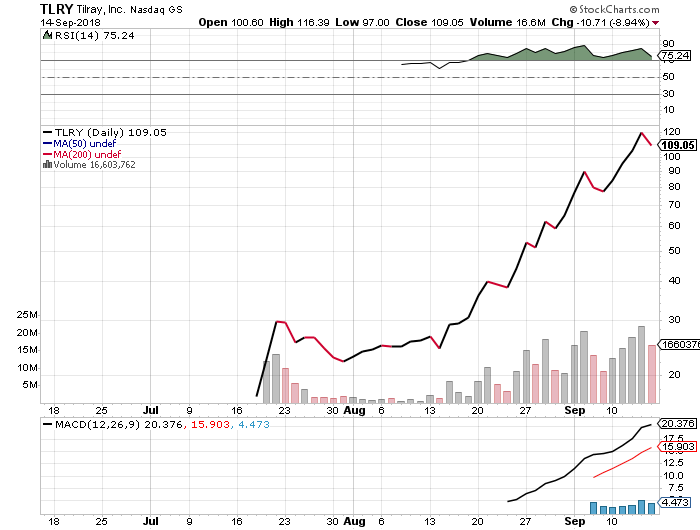 Tilray has delivered gains in excess of 450% since going public.  It's now trading at more than 100x forward sales. It’s not worth anywhere near where it’s trading right now. But that doesn’t matter, because an army of overzealous traders and irrational exuberance is dictating this run, not reality.

Don’t get me wrong. I’ve personally taken advantage of this situation, and will continue to do so. Make no mistake: This market still has plenty of steam left. But to suggest that a sell-off in the space - which was already much needed - was the result of border patrol agents having the ability to do something they’ve always had the ability to do, is nonsense. Yes, the story made for great click bait, but horrible analysis.