Why the USGS is Heading Back to the Bakken

Truth be told, we've been waiting more than three years for the government to own up to its mistake...

“We got it all wrong,” they'd begin with a conciliatory tone.

“Sure, we were way off — but remember that the last time we were there, things were only just picking up.”

And that's true to a certain extent. Because back then, there wasn't so much of a whisper about the Bakken in the media.

The number of oil rigs drilling into the formation was a fraction of the 196 active ones today, and the state's oil production was less than half of what it is currently.

So the USGS is being forced 1,600 miles back across the country to revise their previous estimates...

And the investment climate surrounding this revision is about to become explosive.

That's only six billion barrels behind Saudi Arabia's Ghawar oil field, making it the second largest reserve in the world.

With oil fetching more than $80/barrel, this single reserve would be worth nearly $2 trillion. It'll be worth even more when oil prices make their next run into triple-digits...

And it's right under your feet. 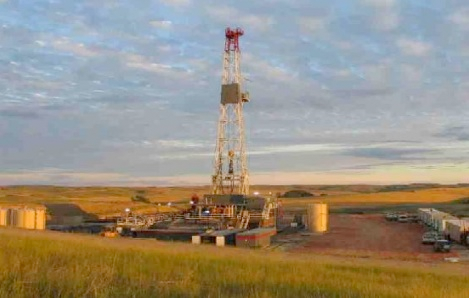 So what's this all about?

This is the first time the USGS has returned since their historic 2008 reassessment, which saw a 25-fold increase in recoverable oil since the 1995 estimate of just 151 million barrels.

The USGS only does these kinds of things if there's reason to believe there might be more recoverable oil — like discovery of new formations or advances in oil drilling technology.

Bakken players like Brigham Exploration have been consistently posting record drilling results since 2008 — a trend that's likely to continue as they perfect their technique.

With huge advances in fracturing and drilling technology, I don't think I need to tell you how big a deal this is for investors and drillers across the United States.

That 2008 reassessment pegged the number of undiscovered, technically recoverable barrels of oil at 4.3 billion barrels of oil. That's it. We all know that was a low-ball figure.

Billionaire Harold Hamm, head of Continental Resources — the largest acreage holder in the Bakken — estimates the Bakken and Three Forks formations hold a whopping 20 billion barrels of oil. And he should know... The man has made a fortune from developing the Bakken's rich oil supplies. He's now worth $8.6 billion.

Furthermore, back when the new study was announced, the USGS specifically pointed out that new scientific data begs for a reassessment of the area, and they're just about to get started.

The USGS reassessment is slated to begin in October.

Smart investors are already moving in to stake their claims in the companies set to profit the most from the release of this news.

There's another reason the Bakken is attracting more attention. Unlike the heavy, sour crude that's coming out of OPEC more and more these days, the formation yields the light, sweet quality of oil highly sought by refiners.

Here's the thing: With the Bakken reassessment just beginning, the time to get in these plays at bargain prices is right now.

A $1,000 investment in Brigham before the Bakken gained media attention could have turned into a whopping $5,749 return.

Just imagine what it could be worth after the USGS report is completed...