"I will never need that."

That's what I told all my friends and colleagues when modern smartphones first hit the market in 2006.

I already had a phone that could make calls, access email, and send texts, so I didn't see any reason to shell out more money to a mobile provider that was ripping me off in the first place...

Of course, I was dead wrong. And as I sit here staring at my Android, I can't help but question my mixed relationship with technology.

On one hand, I am deeply interested in technological innovation and the cultural and financial trends that come with it. On the other, I am highly resistant to the gradual yielding of control that comes hand in hand with the adoption of personal technology.

The truth is I hate much of personal technology as it is today.

It can make us lazy, dependent, and even depressed. It dulls social interactions and allows us to hide away in our own little virtual world. Every time someone pulls out his or her smartphone at the local bar to avoid real conversation, a little piece of me dies inside.

Still, after all is said and done, there really is no choice but to embrace the changes occurring around us. Otherwise, we will eventually left behind.

No matter our personal opinions on the melding of man and machine, this is the direction in which we are inevitably moving...

We've been hearing a lot about wearable devices over the last year or so...

From the hype surrounding Google Glass, to the release of Samsung's Galaxy Gear, to the rumors of Apple's iWatch... it has become increasingly clear that wearables are going to be "the next big thing" in consumer tech.

As of right now, my stance on wearable devices is similar to the stance I held on smartphones in 2006. Personally, I have little desire to wear a smartwatch or a head up display (HUD), and I certainly won't be purchasing either anytime soon. At the same time, I recognize that these devices are about to become incredibly pervasive, regardless of my personal consuming habits.

By 2020, attaching a computer to our bodies will be as common as checking the time on our smartphones is today.

In 2012, the wearable technology market captured approximately $750 million. According to recent estimates by Transparency Market Research, that figure is expected to reach $5.8 billion by 2018, representing a compound annual growth rate of 41%.

Credit Suisse analysts are far more optimistic, putting the wearable technology market between $30 billion and $50 billion in the next two to three years alone.

And unlike smartphones, which idle in our pockets for the majority of the day, wearables will always be present — even in situations where mobile device use is currently shunned.

Last week, Nissan (OTC: NSANY) threw the tech industry a bit of a curveball when it offered a sneak peak at its own take on wearable devices...

And surprisingly enough, what the motor company revealed might just be the sleekest smartwatch we've seen to date. 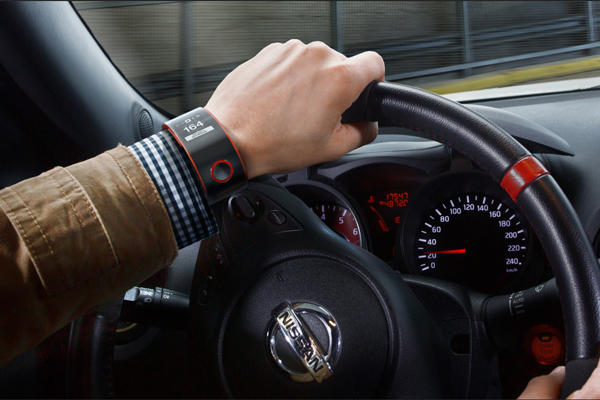 The "Nismo Smartwatch" is being marketed as a device that will connect car and driver. By monitoring user blood pressure, G-forces, and speed, it will be able to provide recommendations to improve driving performance.

Nissan claims that similar technology has already been used to improve the performance of its Nismo driving team. And while this might seem like just a gimmick for the consumer market, it by no means indicates wearables are useless in the automotive industry...

Nissan is just dipping its toes in the water here. And based on comments from the company's marketing team, it's dead serious about entering the budding wearable market.

It's likely that we'll soon see some really interesting applications stemming from this original concept. On top of offering all the standard smartwatch functions, the Nismo Smartwatch could serve as an all-intensive vehicle interface.

Let's say it's a cold winter morning, and you just woke up... You turn off your alarm by tapping your smartwatch, and you make your way to the kitchen to brew some coffee. Your device automatically notifies you about current traffic patterns and calculates the precise time you need to leave if you want to make it to work on time.

The watch gathers data from your 2017 Maxima parked outside and calculates that it will take exactly 11 minutes to warm up the vehicle. It remotely fires up the engine and even makes sure to optimize the car's climate, based on your current body temperature. The doors remain locked until the car detects the watch is near.

Not only is this scenario entirely possible, but it'll take place sooner than you might think.

Nissan seems to be the only major auto manufacturer right now that's taking full advantage of revolutionary technologies across the board. With the exception of Tesla (NASDAQ: TSLA), there is no other auto company that comes close in terms of technological innovation.

And while Tesla's Model S has received plenty of attention in the recent months (for good reason), the Nissan Leaf has sold more units than any other electric vehicle. As of today, Nissan controls a commanding 45.7% of the EV market — and is the only major auto manufacturer actually profiting from EV sales.

On top of wearable tech and electric vehicles, Nissan has recently announced a plan to make autonomous vehicles commercially available by 2020. This might seem a little ambitious right now, but we should remember that when Nissan promised to release a fully electric car by 2010, it kept its word.

Nissan has already outfitted a Nissan Leaf concept with autonomous capability and plans to make that technology available to all models within two vehicle generations of the 2020 launch.

In combination with the Nismo Smartwatch, this could mean door-to-door vehicle service — by use of GPS and Bluetooth, your car will come to you.

If you're looking at tech companies in the auto sector, but fear that Tesla is overpriced right now, Nissan may be the alternative to consider.