There are a number of problems with offshore wind farms. The biggest one is the depth of the ocean. Traditional wind farms have been built in relatively shallow water like on the east coast of the U.S. where the continental shelf is long and shallow. You can build foundations in the seafloor and build your turbines off of that.

In many parts of the world, like on the west coast of the U.S., the shore drops off fast and runs deep. There is little room for standard seabed-anchored turbines. Off the coast of California, you must use floating offshore wind platforms (FOWPs).

Actual construction is still five or six years away. That said, the growth trend is unmistakable. The Offshore Wind Market Report put out by the U.S. Department of Energy states that the pipeline for wind projects more than doubled from 91 gigawatts (GW) a year ago to 185 GW today. In addition, 96 megawatts (MW) worth is under construction worldwide, 288 MW of development is consented or in the preconstruction phase, 31 GW is in planning or has a lease agreement, and 153 GW is in early development or is going through the leasing process.

Here are the types of FOWPs: 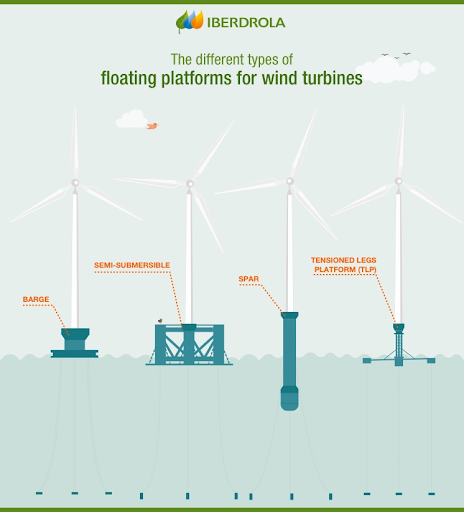 FOWPs are a relatively new science. There is one proof-of-concept farm that has been in operation for the past five years, consisting of five turbines running off the coast of Scotland.

However, just recently, Japan joined the fray. According to industry newsletter Electrek:

The 140 MW project consists of 33 turbines. It is located 300 miles northwest of Tokyo in the Sea of Japan. It is expected that these turbines will put out enough power to feed 150,000 homes for 20 years.

Many other countries, including Australia, Norway, the U.K., Germany and Spain, have FOWPs on the drawing board. That means it's game on for investors like us.

The problem is that most companies that build turbines are large multinational companies like GE that have a sprawling range of goods for sale. You won’t get a 10-bagger from GE’s turbine business. It is simply not a large percentage of the company's sales. It won’t move the needle.

That said, I did find one company, a pure play on offshore wind farms, that is trading just over $10. I recommended this company to my readers in Christian DeHaemer’s Bull and Bust Report this month. The stock has doubled since July and is up 5% since my recommendation went out last Monday. But it’s not too late. This stock has been held back by the general bear market in equities. Once Wall Street realizes the potential in FOWPs, this stock will do a moonshot.

Join us and I’ll tell you all about it. If you don’t like the idea, cancel and get your money back. When you see it, you’ll be like, “Why didn’t I think of that?”