Britain is turning to the U.S. for its energy needs, and on Monday the nation announced its latest agreement between U.K. based Centrica (LON:CNA) and America’s Cheniere Energy (NYSE:LNG).

The deal is for a 20 year agreement that will provide the U.K. with enough liquefied natural gas (LNG) to supply 1.8 million British homes each year, or 89 billion cubic feet. Centrica will pay £10 billion (equivalent to just over $15 billion) to support the U.K.’s waning energy supply.

The LNG will not be exported for another five years and should see its first deliveries by tanker in 2018, reports The Guardian.

Cheniere is one of the first U.S. companies granted permission to export the highly controversial shale gas in LNG form, and it will mark the first time it is used in the U.K. All of the first shipments will come from Cheniere’s Sabine Pass operation in Louisiana where it has a liquefaction plant. 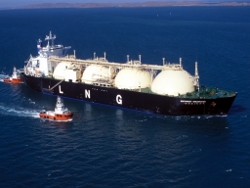 The U.S. government has kept a lid on its shale gas ever since its energy boom in recent years, but now, with an overabundance of the stuff, prices have plummeted and terminals that were once used for importing are now being converted to exporting stations.

In turn, a window has opened for the U.K. to seize a gas supply that is sold at a bargain compared with other suppliers; it’s only about $2 per unit compared to Europe’s $10 and $12 in Japan, according to The Guardian, and this dramatic difference stems from the U.S.’ ability to hoard its production in favor of domestic use—until now.

The U.K. operation will be overseen by Centrica’s downstream British Gas unit and will help establish a new era in British gas use as supplies from the North Sea are wilting away and pipelines from Europe are not economical.

British Prime Minister David Cameron offered a warm reception to the deal, and according to The Guardian, said, "I warmly welcome this commercial agreement between Centrica and Cheniere. Future gas supplies from the US will help diversify our energy mix and provide British consumers with a new long-term, secure and affordable source of fuel."

There have been similar kinds of deals in the past couple years, including one with BP that will not meet the magnitude of this most recent agreement.

It most closely resembles a three-year deal that was signed in February of 2011 that would send 120 billion cubic feet of LNG to Centrica from Qatargas, and one other with Statoil (NYSE:STO) 18 months ago that guaranteed 180 billion cubic feet a year, reports the Financial Times. And while the Statoil deal is longer than the Qatargas—ten years—it doesn’t compare to the Cheniere agreement, which runs for 20.

This long-term agreement settles fears after a scare last week sent gas prices skyrocketing and doubling by Friday morning. A natural uproar ensued and it was revealed to the public that Britain had only two days of storage left in its tank. The authorities insist there was no threat of a cut-off, but it still showed U.K.’s vulnerability to energy storage.

Demand has been higher than usual this time of year, as the U.K. is experiencing an unseasonable amount of cold weather. Nick Luff, Centrica finance director, downplayed the urgency when, according to The Telegraph, he said “One day’s spike in prices is just one day.”

Prices are going to be higher when customers are faced with colder than usual temperatures.

Mr. Luff would go on to say the market “worked as it should do” during a gas shortage because of existing supply lines from Russia and Norway among others, but admitted that more gas storage is needed when he said, “As we go to importing gas over long distances, you would want to build up more of a back-up,” according to The Telegraph.

Presently, The U.K. doesn’t have the storage capabilities of many of its neighboring countries, and Centrica has been in talks with the government to build a facility since 2011, but talks keep stalling without a financial incentive to move the project forward.

At a minimum, this new deal would alleviate problems like what occurred last week and sufficiently supply the demand if it increases in the future.

Shale gas is a controversial business and has been suspected to cause problems in water supply, ground and air pollution, and methane gas leaks. But also, household energy bills are likely to rise in the U.K. next year from £1,300 (roughly $2,000) to £1,400 ($2,100), The Guardian reports.

If pricing conditions ease in the U.K., more utility companies are bound to form similar long-term LNG deals like the one between Centrica and Cheniere.