A Flood of Unconventional Gas

Although we credit Colonel Drake and his Titusville well with the distinction of the birthplace of the U.S. oil industry, the fact is we had been actively drilling for natural gas for more than three decades.

As you know, William Hart's 27-foot natural gas well was drilled in Fredonia, New York, during the 1820s. Now considered the “father of natural gas,” Hart was drilling about 80 miles north of the famous Drake well.

But there's another figure oft forgotten in this story...

It's more likely than not you've never heard of Preston Barmore.

Two years before Drake, Preston was drilling less than a mile away from Hart's gas well.

Even though his well was a little over one hundred feet deep, he decided to drop a small 8 lb. charge of gunpowder down the well to fracture the rock. The explosion marked the first time someone fractured rock in order to increase the flow of gas from the well...

And things haven't been the same for this sector since.

Before running through the various U.S. shale plays, let's be clear as to why we're focusing on shale gas in the first place.

Just how important is shale gas to our overall supply? Well, this should give you a good idea: 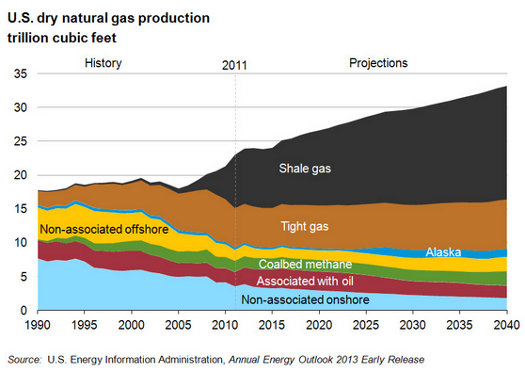 Breaking down the numbers further, we can pinpoint how critical shale gas is to the overall scene (click table to enlarge):

Above, you can see production from shale gas wells jumped 327% between 2007 and 2011. Meanwhile, output from non-shale gas wells has tapered off by nearly 20%.

There's a good reason U.S. shale plays are being blamed for the current supply glut: It's the only place production is truly growing. And since 2011, output in plays like the Marcellus has doubled to approximately 7 billion cubic feet per day!

This new supply couldn't have come at a better time.

We keep getting a glimpse of these small shifts toward natural gas, the most prominent being the move of our power plants from coal to natural gas.

But we're talking about more than just electrical generation here...

Sit up and take notice, because more stories are popping up across the media spectrum every day.

Sometimes it's a short article on a company converting its truck fleet over to CNG — which makes perfect sense for companies like UPS. Prices at the pump can be rather painful when you're running a large truck fleet. The national average of $3.91 per gallon of diesel doesn't come close to the $2 per gallon equivalent that CNG can deliver.

UPS isn't the only company converting its vehicles to run on natural gas. AT&T, for example, plans to purchase 8,000 CNG vehicles this year — and their alternative fuel plan is expected to save about 49 million gallons of gasoline over the next decade.

Natural gas-fueled vehicles are certainly becoming more popular in natural gas-rich areas like the Marcellus. Right now, there are a little more than a dozen natural gas filling stations available for Pennsylvania motorists.

And natural gas is even useful for the companies drilling for it! In fact, Encana has been able to cut its fuel costs nearly in half in the Haynesville by using liquefied natural gas to power its drilling rigs.

It looks like railroads are next up on the list... Canadian National Railway is attempting to make the conversion.

“Are planes next?” you ask. Actually, Qatar has already broken into that territory using jet fuel from a gas-to-liquids process, courtesy of Shell.

This is the road we're heading down — and not getting ahead of this transition will be the single biggest regret investors have decades from now.

Just imagine how pretty you'd be sitting if you could have gotten ahead of the oil curve...

Keith Kohl
for Energy and Capital

P.S. Stay tuned, because on Friday I'll be delving into which shale formations have helped the shale gas revolution get to where it is today — including where investors will be taking profits in 2013.