A Car Dealer's Guide to Silver

Yesterday, I was at the tractor supply store buying 80 pounds of dog food for my beautiful wife’s new Silken Windhound breeding project (don't ask.) when I suggested we stop across the street to check out the Ford dealership.

She had been talking about getting some form of seven-passenger truck for us and our offspring and had her twinkling eye on an Explorer.

It should be noted that last Thursday, Ford's share price dropped 10% due to a slowdown warning for the second half of 2016. My Options Trading Pit readers successfully traded the dead-cat bounce for up to 50% gains in just a day.

And so we found ourselves in the blistering heat looking at Detroit iron. The prices are appalling on vehicles these days. I really don't need a $2,000 touchscreen in my car. Waze is free on my $99 phone that is every bit equal to an $800 iPhone of two years ago. Spending more than my first house on a depreciating asset seems ludicrous. No wonder more people lease than buy these days... and if they do buy, have mortgages of 80 months. They can't afford a house, so they buy a car.

The Future is Glum

That said, I think there will be car-lot bargains in the future. The place was open on a Sunday. “It is the first time in years,” our middle-aged, smiling car salesman attested. “Make us an offer,” he suggested. “The boss wants to move these babies,” he added, tucking in his bright-red polo shirt.

I said, “No wonder” and pulled this crumpled chart out of my pocket and laid it on the hood of a blue XLT: 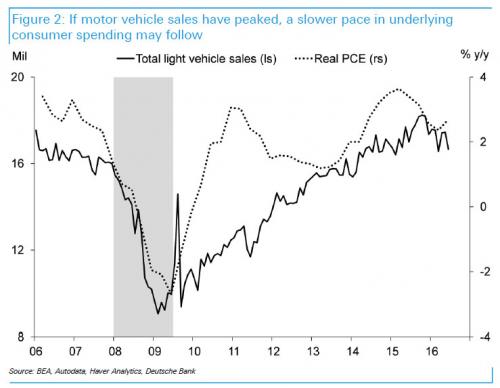 “Ah, yes. Car sales peaked last year,” he said, rubbing his chin. “Restaurant sales are also down. Consumer spending is likely to follow.” He looked glum, like a man who just realized he was in car sales. The chart brought back bad memories of 2008.

“Don't worry, my friend,” I said, as I tried to cheer him up. “Forget cars and consumer spending. Silver is where you want to be.”

I went on to tell him to sell everything and buy silver in all its wondrous forms. I'll tell you now what I told him...

Silver has been the best-performing sector both in U.S. dollar terms and in local currency in July — right behind the Bovespa. 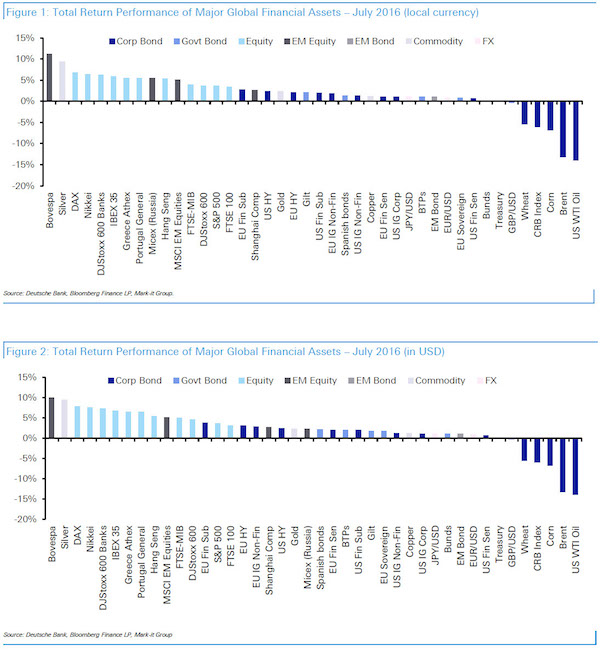 Silver was up 9.5% for the month and continues its run as the best-performing asset this year (+46% YTD).

And here is why it is likely to go higher... 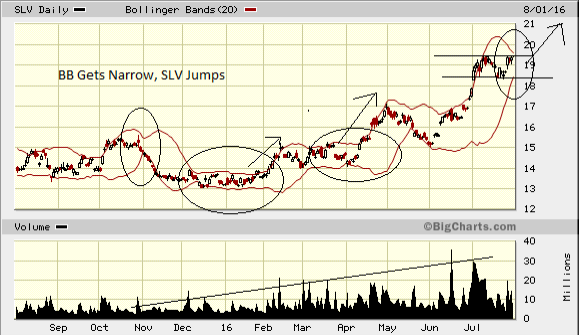 Bollinger Bands (BB) are the red lines that surround the price candlesticks. As you can see by the silver chart, when these bands narrow, the share price jumps. This is called a Bollinger Band Squeeze. It happens when volatility falls to low levels and the Bollinger Bands narrow.

According to John Bollinger, periods of low volatility are often followed by periods of high volatility. Therefore, a volatility contraction or narrowing of the bands can presage a big advance or decline. Once the squeeze is on, a subsequent band break signals the start of a new move.

This is called a breakout or breakdown. Once we get a move above $19.47 or below $18.14, we will know the direction. We can trade this move in a straightforward manner by buying options.

We also know that a stock will move up or down in price the same amount as it went sideways. In this way, if we get a breakout in silver prices this week, in my options trading service we could buy $21.50 September calls on the SLV. Or if we wanted to make more money, we could buy calls on any of the big four silver producers.

It should be noted that silver is flirting with two-year highs today, despite the fact that gold is down. This is due to the gold–silver ratio coming down from a high over 80. As I've written extensively in Energy and Capital for months now, this is our current situation. The ratio is now at 65-to-1. Which means it will cost you 65 ounces of silver to get one ounce of gold. The mean is down around 53, so we have room for silver to go up.

Furthermore, stress tests among Italian banks are showing that they don't have enough funds to cover bad loans, which in turn means more money printing by the EU central bank. Which in turn means gold will go up again and silver will ride along with it.

Further catalysts include a slow 1.2% GDP growth in the U.S., which means rates won't go up and the dollar will fall.

This will be the week to leverage up and buy any breakout in silver.

“Thank you,” our friendly car dealer said as he pumped my hand like a maniac. I could see from the gleam in his eye and his psychotic smile that he was off to mortgage his house with a plan to bury silver bricks in his basement.