Elon Musk hasn’t been a pillar of stability lately for Tesla shareholders.

As his antics both off- and online reached a feverish pitch in 2018, so did the concerns over his company’s future. His increasingly erratic behavior didn’t do his holders any favors.

Yet his tweets took a toll on more than just Tesla’s market cap.

Cobalt investors across the world winced after Musk took a huge shot at the commodity, even going so far as to say he believes Tesla can get its cobalt usage to almost nothing.

If you had skin in this game, then you know what happened next. Cobalt prices dropped sharply as the hype built over a transition to nickel-rich batteries.

Of course, the fact that cobalt inventories at the London Metal Exchange have been steadily rising didn’t help matters much, either.

Thing is, Musk’s tweets don’t have me concerned.

Quite the opposite, actually...

Three years ago, I told you cobalt stocks could be an incredible opportunity for your portfolio.

At the time, cobalt cost less than $15 a pound, and it was almost too easy to see what would happen next: 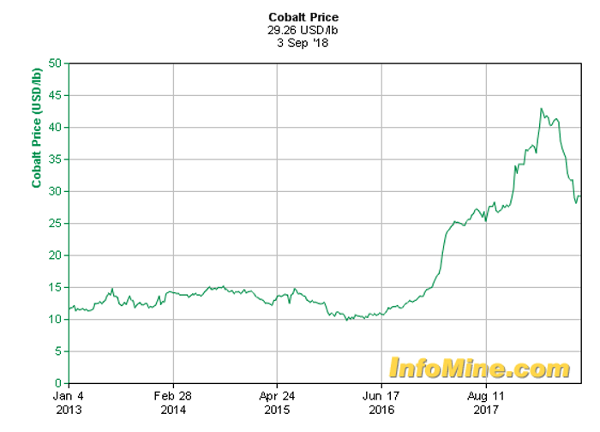 Even after the dramatic decline recently, prices are still more than double what they were in 2015.

So why am I so bullish?

In 2018 alone, cobalt demand is expected to be 50% higher than it was last year. Bloomberg analysts believe demand could reach about 90,000 metric tons by 2030... in the battery sector alone!

But demand growth has never been in question for me.

Take a second, close your eyes, take a deep breath, and then look at the reality of this situation.

Nobody has ever said the transition away from fossil fuel energy sources would occur overnight. We still consume almost 100 million barrels of crude on a daily basis, and I honestly don’t think most people can understand what it would take to completely wean the world off its oil addiction.

Electric vehicles will play a critical role in achieving that goal.

If we include buses in the mix, more than 4 million EVs have been sold worldwide.

At least it’s a start, right?

It took five years to sell the first million EVs, then another year and a half to sell the second million.

And for the record, that 5 million mark will come within the next six months.

708 Million More Reasons to Be Bullish on Cobalt

I know you know the issues behind the world’s cobalt supply just as well as I do.

Don’t make me pull out the pictures again.

You know the ones, right?

Horrific images of young children working endless hours in the Congo’s cobalt mines. Stories of kids being paid pennies to haul cobalt-laden loads to turn a profit for miners in the DRC.

Keep in mind, each one of those new EVs being sold holds roughly 18 pounds of goblin metal.

Granted, this does nothing to mention the fact that it’s one of the key ingredients in smartphones.

So when 66% of the world’s cobalt is mined in the Congo, you have to ask whether or not things can get any worse.

Spoiler alert: They can!

As you know, nearly all of the world’s cobalt is produced as a by-product, and we haven’t mined it here in the U.S. in over 30 years.

That’s where our opportunity lies...

There’s actually a company right now that has been quietly bringing its cobalt mine into operation. It controls the only near-term primary cobalt project in the country and is on the verge of the project’s initial production.

The stock is flying far below Wall Street’s radar, and you can pick it up today for less than a buck.

Once the cobalt starts flowing out of this mine, however, it may be too late.

Trust me, you’re going to want to check out the details behind this one for yourself.