I've been showing you the benefits of 3D printing for some time now.

It's the technology that allows you to design custom parts and products on a computer... and then simply print them out.

While traditional paper printers use a moving toner cartridge head to form lines of text, adding row upon row of toner as the paper moves through the printer, 3D printing works much the same way. Instead of toner, however, a free-moving printer head precisely deposits layer upon layer of plastic or other material to create a solid object from the bottom up.

You can design all these things and then print them out with a 3D printer.

The technology has existed in its current form for about five years. And it's taking off like wildfire.

So are the related stocks...

Here's how the two main plays I'm watching in the space have performed over the past three months (a timespan for which the Dow is negative):

They're up between 40%-70% in just a couple of months. But there are thousands of percent still to come.

NASA is already using 3D printing technology to reduce space exploration costs. The U.S. military sees it as the key to future victories. Boeing (NYSE: BA) is using it to make aircraft engine and body parts. Rolls-Royce has one, too. And there are more than 30,000 people walking around right now with 3D-printed titanium replacement hips.

These industrial behemoths adopting 3D printing is what has gotten the stocks to where they are today, up as much as 270% in a year.

But it's the next level of 3D printer buyers that will take these stocks into +1,000% territory and higher — just like Home Depot — as it becomes Harry Homeowner's do-it-yourself mecca...

The first key to thinking about 3-D printers is this: Do not think printer. Think magic box that creates any object you can imagine.

In the box, razor-thin layers of powdered material (acrylic, nylon, silver, whatever) pile one on top of the other, and then, voila — you've got a shoe, or a cup, or a ring, or an iPhone case.

Another thing to keep in mind about 3-D printing: It democratizes who gets to be in the manufacturing business. You don't need a giant factory and million-dollar machines. You just need $500 and a garage. 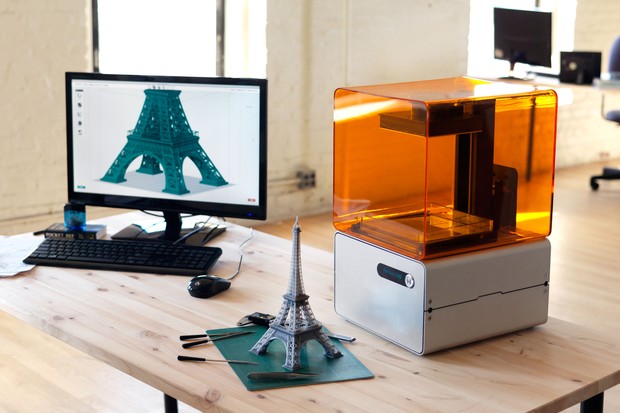 Everyone gets a level playing field to become Henry Ford.

As the price of the printers continues to fall, demand will spike sharply.

And that's what will send the companies into Home Depot territory.

Even better, biotech companies are experimenting with the technology to print out replacement human tissues and body parts, which will open up a whole new frontier of profits.

I've been researching one that developed a 3D bioprinter that can print human tissue for drug testing, so no animals or people are harmed.

All this will add up to a new trillion-dollar industry.

The companies operating inside it are still tiny compared to the opportunity...

You'll want to carve out your long-term position now.