Micro Batteries of the Future

The wonders of 3D printing continue to traverse new fields. 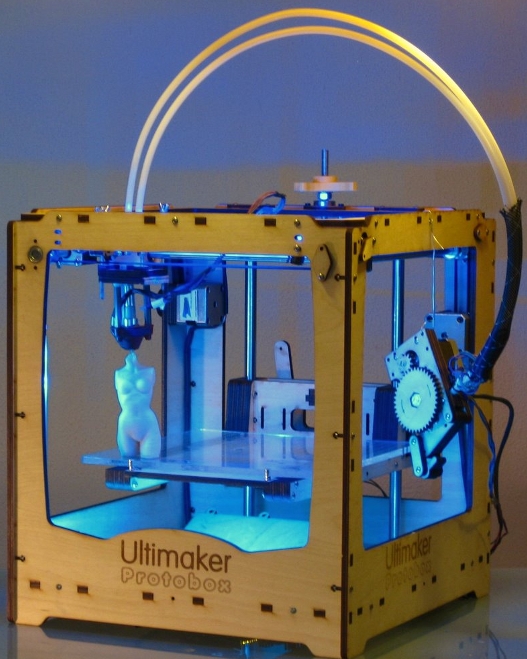 This new form of technology can spawn waves of bite-sized gadgets. The printer and ink used was custom-made, and researchers were able to pull this off by using a narrow nozzle to formulate the battery into layers of miniature, comb-like forms. The inks used will solidify the cathode (plus) and anode (minus), with one layer on top of another. When the layers are combined, electrolytes are applied, coming out as a super efficient battery.

3D printing has taken the tech world by storm – being incorporated into a variety of diverse industries: automotive, aerospace design, engineering, and toy manufacturing, just to name a few. The 3D printing process works by using a digital model to print physical objects with liquid plastics or any other specialized material. Just about any product can be printed as long as there is a digital framework.

The industry shot up 11% in 2011 and is set to be a $6 billion industry by 2017. 3D printing is known to be more efficient and precise than physical molding, and many companies like GE (NYSE: GE), Nike (NYSE: NKE), and Mattel (NASDAQ: MAT) are saving money on prototypes and product testing.

3D printing has also been used to create exoskeleton limb technology and custom-made splints for children. It has even been considered as a source of solving world hunger one day.

Now, it is being merged with the battery and energy storage sectors.

This tiny battery can pack quite a punch, carrying the power of a cell phone battery. It is the first battery ever to be produced by a 3D printer.

Micro batteries rely on a faster-charging cathode design to make these batteries superior to any other out there. Researchers say these micro batteries could outlast the latest super-capacitors on the market, and there is no telling how far this form of technology will go in the future.

Such technology could be useful in the following fields.

Researchers want to print out an entire object with a battery already inside it. Many hearing aids are 3D printed, with the batteries installed later. But researchers are betting that 3D printing can produce an operational hearing aid in one printing session.

Aside from hearing aids, micro batteries could have the power to usher in the bionic eye. It is no longer the stuff of science fiction but in fact a genuine method to help the blind see once again.

In February of 2013, the Food and Drug Administration approved the Argus II artificial eye, developed by Second Sight Medical Products Inc., for those suffering from later stages of retinitis pigmentosa. It comes with retinal implants and a camera in the form of eye glasses. The implants stimulate healthy retinal cells that communicate with the optic nerve, allowing the user to identify the size of objects and detect movements of people nearby.

Argonne Laboratories, whose technology contributed to the FDA-approved bionic eye, and California Lithium Battery, Inc., are fostering the latest silicone/graphene lithium batteries for bionic technology under a Department of Energy grant. Currently, there is technology being developed that can place a collection of micro-sized lithium-ion batteries on a stretchable, silicon sheet to wirelessly recharge bionic cameras.

Think of how useful 3D printing would become in advancing the cause of aiding the blind. The cameras in artificial eyes would be somewhat similar to fully artificial cameras.

In an age of increasing drone use, tiny batteries can be used to power smaller-sized flying surveillance machines. The public is seeing drones of many different sizes and shapes, but few have heard about the kind modeled after insects like mosquitoes.

The military is considering drone-like insects for espionage and assassinating targets using nano-poison, or the mechanical bug itself could detonate inside a person’s ear canal. A battery that is smaller than the width of a human hair could easily be suited for these types of drones. Mainstream use of drones could be seen in the next few years.

Aside from drones, micro batteries would become an important asset in powering miniature cameras. As cameras become more compact, there will need to be the necessary battery technologies to support ever evolving spyware.

Societies worldwide are seeing the increased presence of cameras, whether they are on street corners or convenience stores. New York City Mayor Michael Bloomberg told New Yorkers on numerous occasions that New York City cameras were so small they would go unnoticeable when passing by on busy streets.

Even consumers would be able to get access to smaller-sized surveillance technology, and we’ve already seen this with Google’s (NASDAQ: GOOG) spy glasses. Advocate groups could record with a camera or auditory device that is virtually unseen and easily concealable.

Drivers can immediately record onsite in case an accident occurs, which would come in handy for insurance or litigation purposes. And micro batteries could give birth to a new wave of highly efficient entertainment hardware.

It could also be useful in gaming consoles, tablets and other portable devices. These micro batteries can become so small they can even power molecular technology.

Nanotechnology is the wave of the future, which is why miniature batteries will be around for a very long while. But the problem with nano-tech is there are no batteries small enough to power the cell-like mechanisms.

That could change with micro batteries.

Nanos are increasingly being seen as tools that can detect and eliminate cancer and other diseases. Futurist and Google directional engineer Ray Kurzweil predicted that people can achieve immortality using nano-machines by 2045.

In his 1999 book, Age of Spiritual Machines, Kurzweil successfully predicted the use of smaller and personalized computer devices like the Kindle and smart-phones. He also forecasted video streaming platforms like Netflix (NASDAQ: NFLX) and YouTube.

His tech trend forecasts are well listed to, and with the fast-paced nature of technology, nano-machines could have a more pronounced role in the medical field.

Advanced research has gone into graphene, a compound that is extracted from graphite. It is highly durable and can store as much information as a computer when converted into strip form. It has blown chemical batteries out of the water and will become more useful as technology progresses.

3D printed batteries are in the breakthrough stages, but they are something investors should keep an eye on as more companies begin adopting then in prototypes and devices.

But defense will be one key area where micro batteries will make a hasty presence. Love it or hate it, the surveillance-state is getting stronger in a post 9/11 world. We live in a society where spying on each other is commonplace, which will constantly invigorate the need for micro cameras and the necessary batteries to boot.

Between drones and shrinking cameras, investors have plenty of choices to choose from when investing in defense and surveillance fields.

Micro-sized recording technology would spread like wildfire in places like Russia, where car dash cams are on virtually every car in that country in order to combat police corruption and insurance denials. And it is a good mechanism in substantiating claims in the Russian court system, which tends to dismiss verbal claims.

Russia could very well become a trend-setter in the way people use cameras, and smaller-sized camera technology will make recording more discreet and spontaneous.