Here we are just about halfway through 2017.

It is just past the longest day of the year, when I slaughtered a goat under an oak tree with a silver sickle just as the sun went down. After pulling out its bloody entrails, a friendly neighborhood druid studied them intently. She turned to me, eased the dark cowl from her face, and said, “Buy cloud stocks, hold Ethereum, sell the S&P 500.”

Before we get into that, let’s take a look at some of our winners.

Bitcoin and Ethereum have been huge for this year. I first told readers of Bubble and Bust Report to buy Bitcoin at $449.23 back in May of last year due to doubling day. It is now trading at $2,463. That’s a 448% one-year gain. Not too shabby.

Here is what one reader had to say:

Can you please pass on my thanks to Christian DeHaemerr?
For his Etherium heads up.

I make 1 - 2 barrels of Martinborough New Zealand Pinot
Noir. That is a total 270 to 550 bottles a year. Never sold
to public. Martinborough produces some of the worlds best
Pinot Noirs. Christian, give me a postal address. I will
send you a bottle of the '15, as a thank you for your wise
advice, freely shared

Thank you again for Etheruim tip at $90.00. you champion!

That’s great. I always like it when readers make money. As for the second half of the year, judging by the chart, it looks like Ethereum will sell off the standard one-third of the run up to between $250 and $225 before bouncing and heading higher.

I predict Ethereum and Bitcoin will hit new highs by January of 2018.

S&P 500 Will Correct in October

Here is a five-year quarterly chart of the S&P 500. As you can see, we’ve had seven positive quarters in a row after heading sideways for about a year and a half. 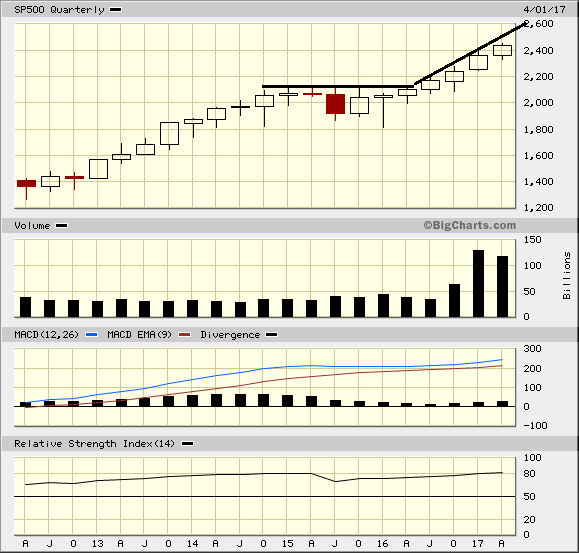 The MACD is the most overbought it has been in half a decade. RSI is touching its tops. Furthermore, the volume has just exploded over the past two quarters.

There are two things of note here. First, most trends run between three and five units. We have had seven white candlesticks in row, which means the trend is long in the tooth. It can continue to move higher, but it is overdue for a pullback.

Second, charts tend to move up as much as they move sideways. This is called a coiled spring. That year and a half of buildup that ended in the first quarter of 2016 launched stocks. This upward momentum will run out in one more quarter — say around the traditional death month of October.

One of the hottest sectors of the moment is cloud computing stocks. The cloud is a system where you use a network of remote servers hosted on the internet to store, manage, and process data.

It is hot because it is much cheaper than building and using your own local server or personal computer.

According to Clutch’s Cloud Computing Survey, 67% of businesses plan to spend more money on cloud computing this year, with increases of 11% to 30%. 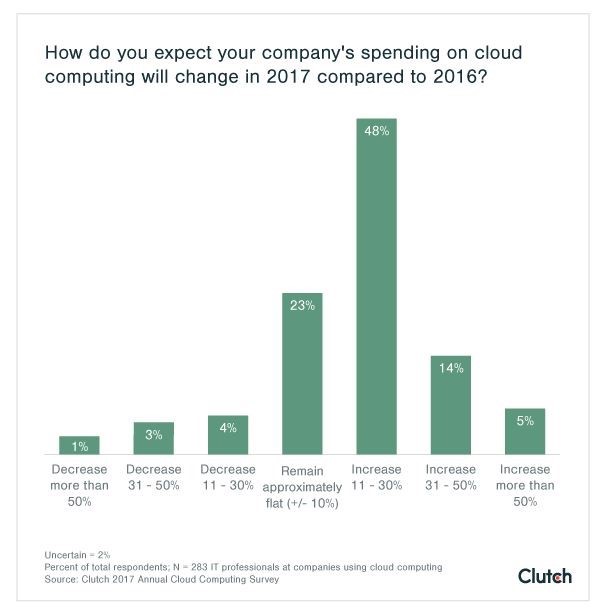 Cloud is driving revenue growth at Microsoft, Amazon, IBM, and Oracle, among others. Full disclosure: I own a ton Microsoft personally for this very reason. I think IBM is a sleeper here with a lot of upside if it can divest itself of its legacy products. I’m a buyer of IBM below $130.

I’m also recommending some smaller players in my trading service Crisis and Opportunity, but members get the first crack at those.

Other sectors I like are space stocks — those companies that make parts for rockets, satellites and spaceships, drone stocks, and driverless cars.

On the resource front, you should own new Mexican oil companies, lithium miners, and gold miners.

I’ll go into more depth on those next week.

Energy Industry Adopts the Ethereum Blockchain
Energy and Capital editor Keith Kohl explains why big names in the energy industry are looking to expand the use of this booming cryptocurrency.
The Biggest Bubble in History Will Crush the World Economy
Energy and Capital editor Christian DeHaemer warns you about the biggest Ponzi scheme the world has ever seen, a scheme very similar to CDO's...
Do Gold Bugs Secretly Love Bitcoin?
Through all of Bitcoin's ups and downs, there has been at least one dependable consistency: The conversation about Bitcoin has always included gold.
Hydrogen Fuel Cells: The Downfall of Tesla?
Lithium has been the front-runner in the battery technology market for years, but that is all coming to an end. Elon Musk is against them, but Jeff Bezos is investing heavily in them. Hydrogen Fuel Cells will turn the battery market upside down and we've discovered the tiny company that is going to make it happen.