The Only Sure Bet in Energy

That was my immediate thought when natural gas prices fell below $2/Mcf six months back.

The downward crawl that's been taking place since the summer of 2008 has been brutal for investors to watch.

After seeing natural gas fall steadily for years, it shouldn't come as a surprise to anyone that it's been trading well below the five-year range through 2012.

Why was I relieved to see it break the $2 barrier in April?

For starters, it's going to start receiving a lot more attention over the next year.

So if you haven't taken a look at the industry recently, you had better do so before the ball drops in Times Square in two months...

Only one thing has been holding back the rebound in gas prices: a supply glut.

Although demand has been slowly rising since 2006, it isn't even close to the pace of production, which increased to 28.6 trillion cubic feet last year...

However, we knew lower prices would eventually take a toll on our domestic output.

As you can see below, declining gas prices have forced drillers to target more liquids-rich plays: 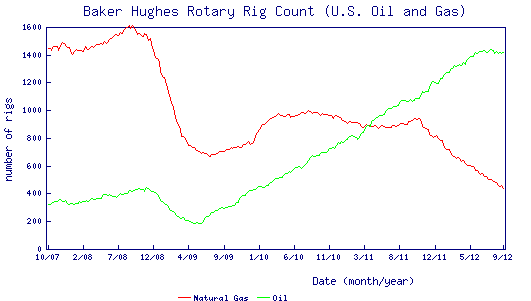 The only question was when it would be enough to make a difference.

According to the EIA, our marketed natural gas production has been relatively flat since late 2011:

Recent hurricanes aside, some of the shale gas plays simply aren't economical with ultra-low natural gas prices, forcing companies to shut-in wells until a price rebound takes place next year.

Since bottoming at $2/Mcf, natural gas prices have already rallied 73%.

This will lead to some tremendous opportunities next year — like this stock I want to tell you about today...

The Sure Bet in Natural Gas

Is there such a thing as a sure bet?

Not many people would say yes, especially when it comes to natural gas.

But let's say you've followed the shale gas boom since 2006, when the Barnett just started to emerge as a major play...

That would mean you had a front-row seat for gas prices crashing 84% during the last four years — enough to turn any investor with skin in the game off to natural gas.

For some, that loss was about as painful as it gets.

The collapse was particularly volatile for one investment trap: 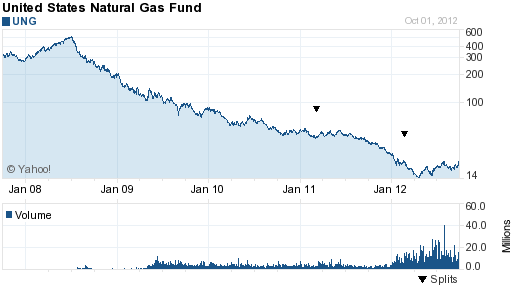 Doesn't instill much confidence in the industry, does it?

While the investors with stakes in the above play were busy losing everything betting on a natural gas price rebound, there was another class of investors experiencing the opposite...

They simply found a way to bypass the risk of price shocks.

And for them, profits were as close to a guarantee as you can make in the market: 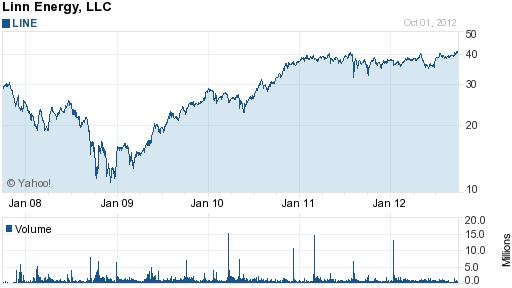 The most import thing to remember when it comes to natural gas investing is to think in the long term.

Over the next few decades, the United States will come to heavily depend on this cheap energy resource. But as I mentioned earlier, we won't see a severe price spike again; once the supply glut eases, even a hint of a shortage would mean producers can turn their taps back on...

Why not side-step the price volatility altogether?

Not only is Linn Energy paying out a strong 7% annual yield, but 100% of their natural gas production is hedged above $5 through 2017.

This is perhaps one of the safest income stocks you can make — and one of the few must-own natural gas stocks for 2013.

These income plays may look dull, but you want them to be boring. These are the plays you can stick in the back of your portfolio and forget  — and you'll be pulling in regular gains the entire time. Learn more about dividend-paying investments here.

In the meantime, don't delay getting in on these dividend-paying energy stocks. It's already October... If natural gas hits $5, you'll have to pony up a lot more in the New Year for these same plays.